There are certain times in your life when you experience regret and frustration simultaneously.

The CBS-500 was the cause of one such event in my life. The only saving grace was that I had bought the radio from a friend and the bank account didn’t take a large hit.

This radio is a 40 channel AM base station CB radio with an internal power supply so that it can be powered with the attached AC cord. It has a very nice and simple layout with easy to reach knobs and dual function buttons in addition to a signal/power meter and a LCD digital display showing both the channel and the frequency in 5 digit form.

This radio had a lot of potential, especially with some of the scan and memory features. I especially like the dual watch feature which allowed you two monitor two channels for activity. Not something found on too many low end CB base stations (this unit retailed from $129.99 – 159.99 brand new).

The radio had a “low” button to reduce the output power for local talking. It had the standard ANL and NB features which would show up on the LCD display when activated.

Now the cool things – it had a channel scan which would scan through all 40 channels monitoring each one for 5 seconds. It also had a memory scan, where it would scan your 4 favorite channels saved in memory. The ML/MS button allowed you to store the memory channels.

The radio has a plug in the back so you can run it on DC and it had an external speaker jack as well ( the stock internal speaker isn’t anything to brag about).

I had high hopes for this radio, especially since there was what seemed a very simple frequency modification that could be done to open up 25.165 – 29.655.

1.Remove the top cover and look at the circuit board on the back of the faceplate.
2.Locate the jumper close to the CPU chip LC7232.
3.Move this jumper off of the pins that it’s on and put it on the side.
4.Once the channel modification has been done press channel 9-19 button and hold and turn on the radio. After this modification use the 1 button to select different bands of 40 channels. 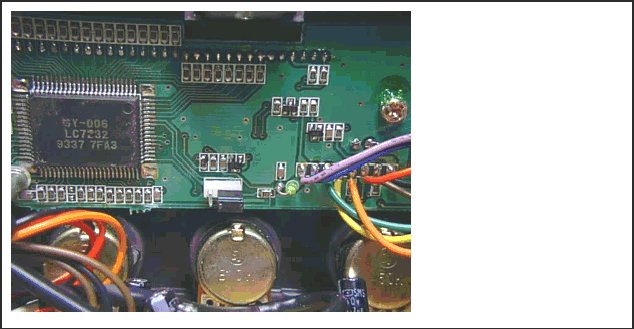 But here’s where the trouble began.

The FCC found out how easily convertible this radio was and they didn’t like that of course. So they complained to Cherokee and then the manufacturer had to make it a little harder to convert.

They accomplished this by adding some type of un-godly plastic substance to the back of the circuit boards effectively covering the area where the modification would need to be performed.

The radio I had bought was one of these later models and had the impenetrable substance all over the board. Now I’ve seen a lot of different types of plastic, rubber and glue, but whatever they used on this thing stumped me like nothing else. I tried everything in my arsenal to remove the grey substance but to no avail. I didn’t want to damage the radio so there was a limit where I stopped myself (shortly before getting out my hammer and chisel).

Alas, my radio was never to experience the full frequency coverage possible (which was one of the most desirable reasons to own this radio).

So I used this radio for some basic 40 channel talking and here’s what I found.

The memory features were very cool, the radio felt solidly built and the knobs and buttons all worked very well. The LCD display and backlight were good and it was easy to read. Having the different features show up on the LCD when activated was also very cool.

The radio itself was not a big modulator. It was downright quiet. I added a very powerful desk mike and was able to get some reasonable modulation of out it but really nothing spectacular. I’m sure by removing limiters and such you could get a bit more out of it, but without turning it into a splatterbox it had average audio output.

The receive was a little noisy but bearable, although it really seemed to like to pick up static more than other stations. As with many new units I found the receive to be weak compared to a Cobra 142GTL or even a Uniden Dwight D.

The stock microphone is crap of course. I would suggest a good desk mike if you decide to run one of these radios.

My complaints about this radio really aren’t about its design or layout. I really liked the options it provided and it seemed like a fairly well built unit. But as with many of the new bargain priced radios it could have been so much better. A little more work on the modulation circuit, a little better receiver and it might have been a great radio.

Add the amazing goo that can’t be removed and prevented my frequency conversion to the other disappointing test results and you have a radio that I would pass by for just about anything else.

It will transmit and receive and you might see a solid 12 watts swing on transmit, but that’s really all you can expect out of this radio. If you can get your hands on one of the older models before they started adding the goo you could have some fun with it in the freebands or as a 10 meter rig, but the performance will still be lacking. If you must have a scan function or you like the dual watch feature than it is one of the few radios offering up those kind of things, but the real job of any radio in the end is to be able to talk to other stations and this radio really wasn’t anything special.