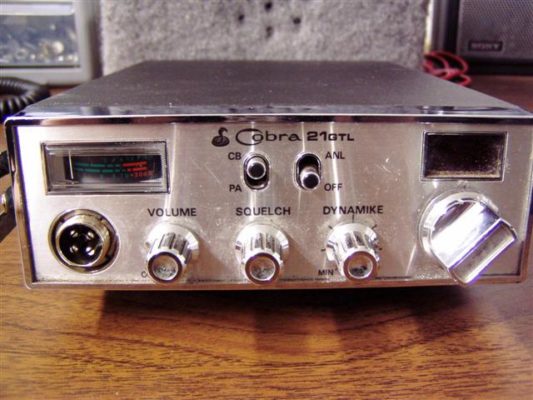 It’s one of the radios I’ve had for many many years. It’s one that I won’t sell and only use a couple of times a year. But it just is so damn loud.

I own multiple exports and I’ve owned a lot of CB’s in my day, but this one has trumped almost every one of them. I currently have a new Ranger SS-158EDX and General Longstreet that I just did a reviews on and they both have excellent audio, but this little sucker still holds it own against both radios.

I bought this radio with a couple of Cobra 25’s and 29’s a number of years ago. I did the super modulation swing mod (shown on this site in the How-To section) on all of the radios including this one. When I went through and tested them all, the radios all checked out and sounded good. But when I got to this one my friend on the other ends said….

I radioed back to him..”This is the Cobra 21GTL…. it is that much louder than the other radios we’ve been testing?”

So when I sold that bunch of radios I held on to this radio. I added a couple of potentiometers (one for talkback and one for variable power) and I started running it with a box. It just performed awesomely.

The Cobra 21 GTL is a very simple radio but it has all the right features. Volume, Squelch, and Dynamike controls on the front. The dynamike is especially well received as so many small radios just don’t have it as a feature. It has the LED channel display and the ANL switch (which works like a charm on this radio). With the ANL switch on this radio I can cut out almost all engine noise, so much so that often I’ll have to turn it off to hear static over the freeway noise. The radio also has the PA switch.

In the back it has the PA and EXT speaker jacks (which allows you to add the resistor for poor man’s talkback quite easily).

The transmit on my particular radio is excellent. The little guy can key anywhere from 0.5 watts to 5 watts depending on where I set the variable control and swing from both is over 20 watts.

The audio on this little radio is just screaming. I run a SRA-158 with it or even a good coffin style Cobra microphone (I tried running a power mike and it just distorted), no need for a power mike with this radio. The audio really cuts through the hash out there and can get this radio heard in tough conditions.

Now you might not think that a small radio can get you heard on the Superbowl during DX condition but this radio did just that ….barefoot! In Hawaii I talked to the mainland a couple of times barefoot when I hooked up this radio. Recently I was talking to California barefoot on channel 28 with a Wilson 5000.

At one point my soldering on my super modulation modification failed and the transmit went out until I re-did my soldering but other than that this old radio is still performing whenever I call upon it.

I usually reserve this radio for road trips in friends cars or in rental cars. I slap a K30 on the back and plug this radio in the cigarette plug. People on the highway think we have some big tuned radio but they’d laugh if they ever saw it.

It only comes out once or twice a year but it’s done enough to earn a permanent spot in my collection and that’s why I love the Cobra 21GTL.