Export vs. CB – Which one is right for you? 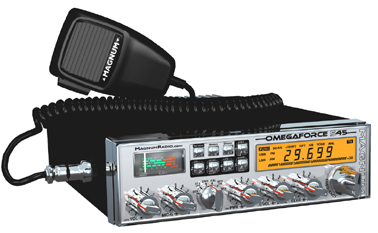 So you just bought a Cobra 29 GTL and you took it to your tech who added echo, talkback, extra channels, and changed the final so it’s output is 30 watts. The total cost of the radio + all the extras was around $250.

Did you know that for less than that price you could have bought a radio that already had all of those features built in from the factory?

Export radios are nothing new, they’ve been around for years. Lately though the Export radio market is really booming and it seems like there are new models being offered all the time.

I guess to discuss Export radios vs. CB radios we need to make some clarification on what makes these two types of radios different.

All CB radios must meet the FCC requirements and those rules are pretty basic (4 watt maximum output, 40 channels only, etc etc). An Export radio is a radio designed to only be sold overseas and therefore it can be produced and sold without having to meet the FCC regulations.

Although Export radios legally aren’t supposed to be sold in the US you can be assured that they are pretty much available everywhere.

So since an Export radio doesn’t need to meet FCC standards they are often designed with additional features that many of us in the CB world enjoy.

In many cases a 4 watt CB radio with a well tuned antenna will work just fine, but for shooting skip or talking farther locally you probably need a little more than 4 watts. Export radios fall into a couple of different categories as far as power output levels.

There are many Exports that only have a single final transistor and basically have the same output as a CB radios. The next group has dual finals and will deadkey about 8-10 watts and will swing to 30-40 watts. Finally you have the Export radios with built in amplifiers and most of those with deadkey around 30-50 watts and will swing to 100-150 watts. Of course there are some different types of configurations and exceptions to the rule.

The General Lee is an example of a dual final Export radio. Peak output can be anywhere from 30-45 watts.

When the regular 40 channels get too crowded often CBer’s will go above or below the 40 to try to find a clear station (also known as freebanding).

Although many of the frequencies they can talk on are Ham radio freqs and should not be used, there is some great DX on some of the frequencies just above channel 40 and having extra channels gives the CBer more choices on where to talk and look for DX.

Export radios will most often have these groups of extra frequencies divided into banks that are identifiable by a switch with A,B,C,D,E,F and so on depending on how many extra banks of frequencies are available.

Most of these functions can be added to your regular CB without much difficulty, but if you really like these types of functions and want a quality echo than the Export radios are an excellent choice.

Many of the Export models come with a roger beep switch and a echo that has time delay functions. I’ve found that the factory echo in many of the exports is very clear, works well and is easy to use. Best of all the knobs are all set into the face of the radio and it looks much cleaner than adding a aftermarket knob to your CB.

While many CB’s such as the Cobra 29 GTL are known for being rock solid and strong performers, there are a lot of cheaply made CB radios being sold out there. Those radios are designed for people who just need a simple and basic radio for a road trip or a 4×4 weekend.

Exports tend to be designed for the CB radio enthusiast in mind and because of this they try to make sure the radios have a higher level of function in many areas such as receive and modulation.

he HR2510 is a very high quality Export radio, some technicians claim it’s quality is similar to some higher priced ham radios.

BUT WHAT ABOUT A COMPARISON

Well there is no way to test all CB’s vs. all Exports, but there are definitely some good and bad to owning either one.

POWER – Since most Exports have dual finals and CB radios have a single final it’s safe to assume that with a Export radio you will be able to talk farther than a CB radio. But additional finals mean more heat inside the radio and therefore the need for a heatsink or in some cases fans are needed to cool the radio. A buildup of heat can cause failure of components inside a radio and there are some Export radios that do not use an adequate amount of heat transfer technology making failure rates in those radios higher. Many CB radios are still running perfectly after 30 years, while many Exports will succumb to problems after 15 years or less.

RECEIVE – This is one of the biggest things you will notice between a CB radio and a Export radio, the receive in Exports tends to be much better. Now many people will argue that their old Uniden Grant has better ears than any Export, and yes there are exceptions to the rule. But in my experience with Export radios I’ve found that often I could hear stations that were not picked up on my standard CB’s.

DURABILITY – Well the good old CB wins in this category. My older Cobra radios 25 LTD, 29 LTD Classic, 148 GTL are all still working as good as the day they were bought. Most of them are over 20 years old. In my experience with Export radios I’ve had two in which parts shook loose inside after a couple of years and had to be replaced, I’ve had two that died completely, and also a couple where knobs have come loose or broken off. Now many CB’s are made cheaply and are pieces of crap. But if you asked me which radio would last longer – a Cobra 29 LTD Classic or a Galaxy Export model I would definitely say that the Cobra will outlast the Export. For many people this isn’t a huge concern as they only use their radio every couple days or even less, but for truckers who use their radio every day these durability concerns become more prominent as the radios shake rattle and roll. 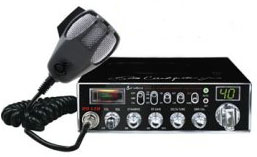 FEATURES – Well just about any Export is going to have more features than its CB counterpart. They really do pack quite a lot into a small package and as mentioned before having the feature come stock from the factory means that their installation is often better than a hack job some tech could do installing an aftermarket echo in your CB. To add many aftermarket features to a CB requires soldering and anytime you mess around inside a radio their is a chance of error. Having a radio come from the factory with everything you need is a nice luxury.

The Magnum S-9 is a popular Export radio with dual finals and the Top Gun modulator.

PRICE – Depending on what your price range is, the comparison here can vary greatly. If you are in the market for a radio and have $50-100 to spend than a CB is definitely going to be your choice. There aren’t really any low end Export radios. Most Exports start around $150 and up. As mentioned before though, for the price of a heavily modified CB you can probably get a very nice Export that already has all the functions from the factory.

The Magnum 257 is a low priced Export with dual finals, extra channels, variable power, a frequency display and more. Prices start around $150-180.

OVERALL WINNER – Well I think depending on the buyer it could be argued that both radios might be a winner, but when it comes to the most functions, most power, and greatest performance I definitely would say that Export radios trump the CB radios. But of course being a winner comes with a price and in this case it means to have the winner you have to shell out more $$$. Whether or not an Export is worth the extra dough is a question only you can answer.