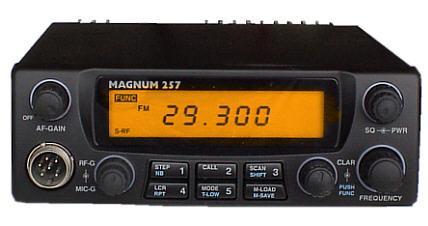 If you are an avid CB radio enthusiast than no doubt you’ve heard about one of the most popular radios ever produced by Magnum International – the Magnum 257 10 meter radio. Upon seeing this radio for the first time you will be amazed by it’s small size and compact design. It’s smaller than your standard AM/SSB CB radio but contains more options and power than many of its bigger cousins. The Magnum 257 comes standard with dual finals giving it output power in the range of 15-20 Watts AM and 25-35 Watts on SSB depending on how the radio is tuned. The radio I owned and tested was the older yellow display model which is no longer sold. The new models have the blue display.

Although this is a 10 meter radio it can be modified for use on the 11 meter CB band (of course using it on the 11 meter band after modification would be illegal). To modify the radio to work on the 11 meter band (these instructions are for the newer blue face models only) you need to remove the speaker side cover and look for the CPU board in the front of the radio near the microphone connector. Like many export radios this board has 4 sets of pins and a jumper that fits on the pins, to convert the radio for expanded operations move the jumper to the CON 3 position and you will have coverage from 25.165 – 29.699 MHz. The frequencies are divided into banks labeled by a letter on the LCD, press the CALL button to go through the bands, the CB band is BAND E.

The Magnum 257 has the ability to transmit on AM, FM and SSB. It has mic gain, RF gain, squelch control, variable power control, a clarifier, volume control, frequency knob and NB and NB/ANL capabilities.

Most of the testing on my Magnum 257 was done in the mobile although I’ve heard of many people using these radios in a base application with a power supply.

The first thing people told me when I started talking on AM was that although my voice was very clear I wasn’t very loud compared to some of my other radios. To fix this problem I opened up the radio and turned up the modulation pot (VR4) to maximum. This helped a bit, but my audio still wasn’t anything special. A member of my CB forum then informed me that the Magnum 257’s stock microphone is actually a power microphone and there is an adjustable potentiometer inside the microphone that can be adjusted for more microphone gain. I opened up the stock microphone and sure enough there was a pot inside. I adjusted it to maximum and then tested out the radio again and this time everyone said that my voice was LOUD and clear. My deadkey with the variable power in the high position was around 8 watts with swing to 20 watts.

The receive on the Magnum 257 is excellent on AM. I was receiving everyone easily and the sound quality was great. One thing to note though – the receiver in this radio is very sensitive and any electrical interference from your vehicle will be picked up and can cause problems with your ability to hear. I did utilize both the NB and ANL on my radio and it cut down the background noise considerable but it still did not cure the problem completely.

I switched over the SSB for a test and that’s where this radio really came alive. This is one of the best sounding and most stable SSB radios around. It’s SSB abilities rival that of the President HR2510 and HR2600. SSB output is around 25 watts stock and everyone gave me great reports. On the first day I had this radio I was able to make multiple contacts to Australia. It has no drift whatsoever and I was easily able to clarify signals.

The radio also has one of my favorite features – the ability to program buttons to memorize channels and modes. With a few simple steps you can program the buttons for your favorite channels and modes making it easy to switch between channel 6 AM and channel 38 LSB in a flash! This is one of the features that I also loved on the Magnum Omegaforce.

With a lot of testing I came to the conclusion that this little radio is a solid SSB performer. The AM performance out of the box isn’t amazing but does fine. If you do a lot of AM talking and have a older yellow face models there is an excellent NPC modification described later on in this article that will increase AM modulation and SSB modulation and I was able to see 30+ watts on SSB.

These radios are fairly simple, dependable, put out a solid amount of power and are cheaply priced. If I had to buy a new SSB radio and only wanted to spend $150 – this is the radio to buy. You can easily spend $150 on a cobra 148, have it all tuned up and even after all that on SSB it will only have 22-25 watts output. This little radio will easily do 25 watts on SSB and even more if tuned up.

On my radio the knobs were a little loose feeling, but that’s a trait of many of the Magnum radios. The heat sink would get warm after long periods of use but it never heated up to a point where I would be worried, it performed as it was supposed to. I tried a D104M6B Astatic microphone on this radio and it performed well, but after a number of tests between it and the stock microphone I found that on this radio the Astatic mic only provided 1-2 extra peak watts and many people on the air couldn’t tell the difference The stock mike is an excellent match for this radio and as a plus it has the up/down changing channel features.

The adjustment pots inside the radio are as follows –

The Magnum 257 performed flawlessly for me for 2 years at which point I sold it to another operator who has used it for the last 2 years without ever encountering any problems. It still is hands down one of the best SSB radios I’ve ever used. It will never win any audio battles on AM, but on SSB it will allow you to talk anywhere you want. And don’t forget those memory buttons that save the channel and mode, there are very few CB’s or 10 meter radios that have that ability. And just one addition note – although I never had to contact Magnum radios regarding this radio, the times I have dealt with them on other occasions their customer service has always been excellent.

So in conclusion, all I need to say is – a dual final AM/FM/SSB radio with multiple functions, excellent SSB ability and all for under $200, you can’t go wrong with this one.

The additional information below was provided by fellow operators

PLEASE NOTE: I do not guarantee the validity regarding any of the information below in regards to your radio. In addition to the newer blue face models of the Magnum 257 there are also 2 different styles of the yellow face model, pre 2000 models and post 2000 models and all of these radio have subtle differences. Performing the wrong modification on your model could destroy your radio.

If you buy the ultimate modifications bible vol #11 you will find a swing kit installation in this
book….. These are one of the plans that can be bought for 20 dollars, but are included in
this book….. Book is also known as the UMB#11……

Please note – I had excellent results on a Magnum 257 with only doing the diode resistor modification on the back of the board…I have not done the RF/Mic gain control part of the modification listed below and do not know if it is necessary. 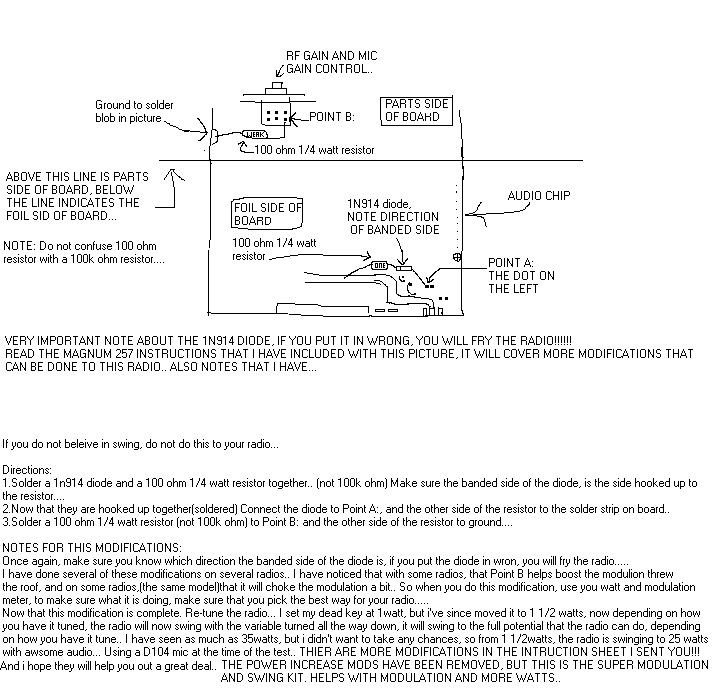 Picture of Back of board diode and resistor 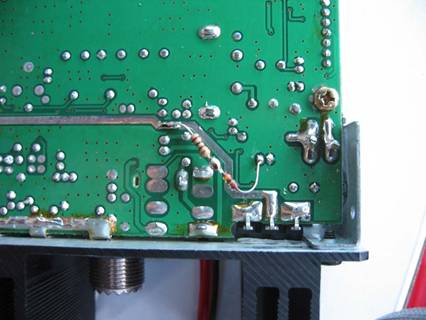