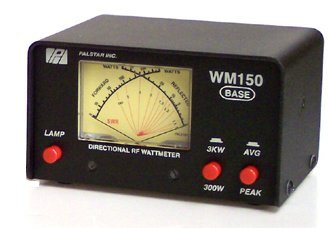 A couple of years ago I decided that my old SWR / Power meter was a little too old school and it was time to upgrade. I searched the internet for many days and read through review after review on multiple websites until a friend mentioned the Palstar WM150. I immediately did some research on the Palstar meters and the feedback was very positive.

Most people had given this meter very high ratings for both quality and accuracy. It was heralded by QST as the only wattmeter that has true active peak reading.

This meter has the following features – 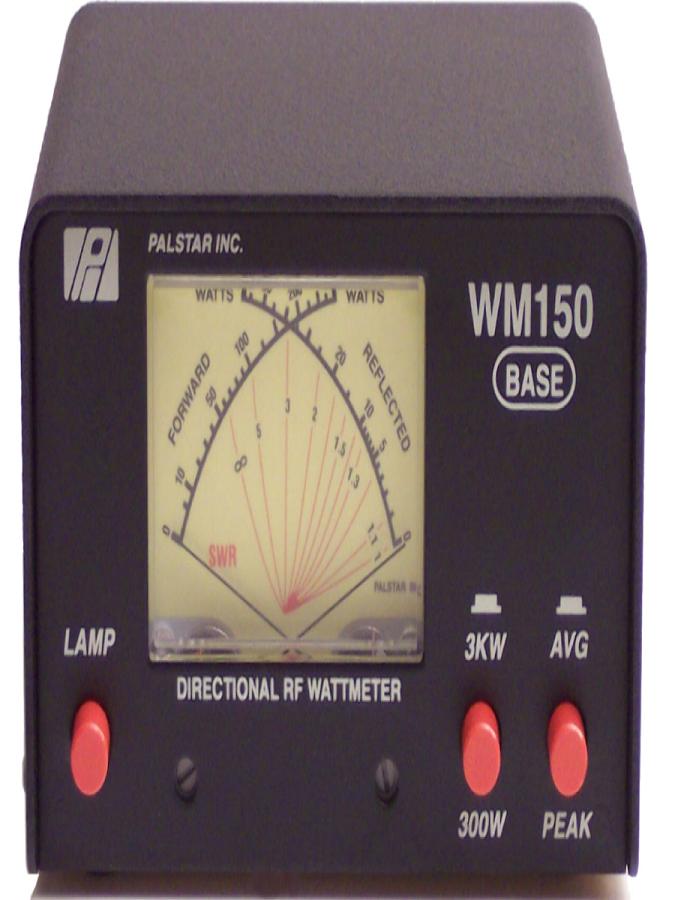 On Eham.net this meter had 17 reviews and received a 5 out of 5 rating on every single review.

My buddy had purchased two of these meters and so he sold me the other one which was brand new in box.

This is a very nicely made meter! It has very solid construction, simple and effective controls, and offers a large display with light. Inside the meter you’ll find surface mount technology with nice soldering and quality parts.

The meter comes with a wall wart that plugs in to any standard home plug. This 12 volt power allows the back light to work for the meter display, and the peak reading. This meter is considered an “Active”  peak meter which means that the peak reading is electronic. These “Active” meters tend to be the most accurate for peak readings as they don’t use the passive style meter damping circuit. They do require power though for the “Active” function to work properly.

As a watt meter the WM150 delivers. It is one of the most accurate meters I have every used for measuring output and for SSB it’s just hands down amazing for offering true peak readings. I used multiple radios and amplifiers with this meter and did a number of comparisons before concluding that as a watt meter it can be considered at the top of its class (especially in the $150 price range).

The reviews on Eham.net will echo these sentiments – experienced Ham operators (not just CBer’s) found this to be an excellent HF meter and compare it favorably to other more expensive meters.

Many people are attracted to this meter because of the cross needle measurement functions. These days a lot of people prefer the “all-in-one” ability of a cross needle meter that doesn’t require flipping switches and going through the calibration process.

The meter face is easy to read and the increments are clearly defined. All of the measurement areas on the meter are clearly labeled.

Now, after saying all those things that impressed me about this meter I’ll let you know what bothered me about it.

The biggest thing that irked me right away is that when I hooked up this meter my SWR/Reflected Power was showing much lower than my other meter. On my other meter I was seeing a 1.4 on my dipole and on this meter it was barely moving above 1.1.

I figured that this much more expensive and accurate meter was correct and my other older meter had just been “off”.

But something kept nagging me about the reading. Another SWR meter I had showed a 1.4 also. So eventually I hooked up the WM150 and unplugged the coax from my antenna. The SWR on the Palstar WM150 went to 1.5 or so. I hooked up both of my other meters and the SWR was off the charts (as it should be with no antenna hooked up).

I called up my buddy and asked him to do the same thing with his meter……sure enough same result.

After a lot of testing we discovered that both meters, while excellent for reading power, were totally inaccurate at measuring SWR or reflected power. Obviously a calibration issue of some sort or defect from the factory.

We called up Palstar and got very good customer service – we boxed up both meters sent them off and waited for their return. A couple of weeks later both meters came back and although they had been recalibrated my meter still showed a lower SWR (1.2) than both of my other meters. When I unplugged the coax this time though the meter did jump much higher but still didn’t fly off the chart.

My second issue with this meter is its inability to measure wattage in the lower (0-20 watt) range. The meter is actually more accurate in the 50-500 watt range than it is in the lower range.

As someone who is doing reviews and adjusting the deadkey in CB radios on a weekly basis I need a meter that can clearly show me the difference between 1 watt and 5 watts and everything in between. This meter is not the meter to own for this purpose.

Now those being my only major complaints maybe it’s not enough to create buying doubt in most people’s minds, and it really shouldn’t be (the WM150 is no longer available but Palstar has released the PM2000A replacement which has gotten excellent reviews). It’s very possible I just got the proverbial bad apple.

For a price tag of $150 I need a meter than can accurately show low power output as well as high power output on a relative scale. Combined with the SWR defect and the fact that this issue occurred on two separate meters I decided to give up the WM150 and sold mine on eBay. I’m still interested in trying the new PM2000A as I was impressed with the products and the quality of build, but my first experience wasn’t an all around positive one.

The WM150 for me measured peak output better than any $150 meter I’d tested previously, but failed when asked to measure my SWR accurately. If you’re looking for a true active peak reading wattmeter I would seriously consider this meter, but if you need something to measure SWR / Reflected power I can’t give my 100% approval for this one.