In today’s CB world being heard by someone else on the radio can be difficult. There is considerably more interference than there was 20 years ago. CB radios themselves aren’t really built to talk very far but many CB radio enthusiasts modify their radios for more output so that they can talk farther locally and also make more DX contacts. For many people this includes adding a linear amplifier (illegal in the US) to boost their output wattage.

The real question with output power is how much do you really need?

We are all familiar with the CBer’s who take it to the extreme adding multiple thousands of watts to their systems, but for most people this is totally unnecessary. To really make sense of how output power effects the distance of your transmission you need a good graph and lucky for us someone has already taken the time to put “power in perspective”. 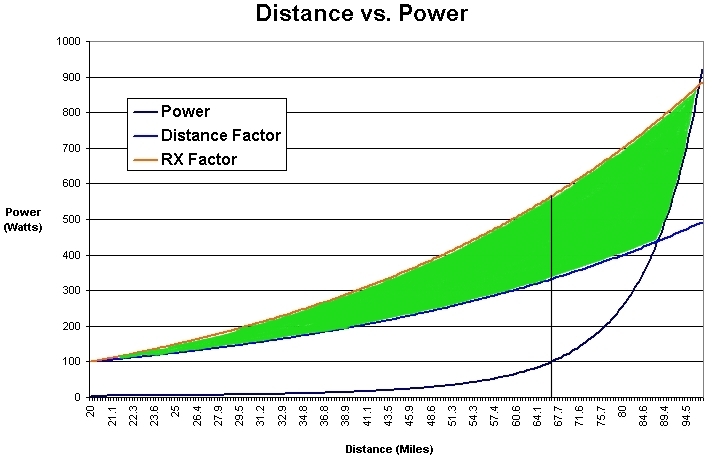 The numbers used were calculated using the inverse square laws for intensity and distance, and the commonly accepted rule of 6dB per S unit. I also had to use a baseline for a reference. That was that 4 watts of power will transmit 20 miles and be received with 1S unit. I can change these baseline values, but the curves stay exactly the same.

The blue curve represents the percentage increase in distance when increasing the power from 4 watts. It is also the S unit at a fixed station when you increase your power.

The red curve represents the receive gain factor. Going from 1S to 3S actually doubles your received power 5 times, even though we would normally think of it as 3 times more.

The green area shows the limits of practicality, where going beyond green yields an increasing diminishing return.

Using this chart, you can now choose your output power level for the desired result (use a vertical line to do so). For example, you can see that going from 4 watts to 100 watts yields about 335% more distance, or a total of 67 miles. Or, you can use the RX factor to see that you will have doubled your received power 5.75 times or to about 3.5 S units (this is all from the reference baseline). Well, I know the curves are probably hard to use.

Anyway, the important points are where the distance factor and RX factor curves cross the power curve.

The lower crossing represents the maximum practical gain in distance by using power. That is about 450 Watts. If you want to talk farther, there is no point in trying to go beyond 450 Watts. Most folks will want to run a solid 500W amp for best practical distance results.

The higher crossing is the maximum *poundage* return one will get from increasing power. That is about 880 watts. Most folks will want to run a 1000W amp for best practical *hammerin* results.