Predator 10K antennas along with Monkey Made antennas continue to be some of the top selling coil antennas on the market. The big coil antennas have been around for a while but these two manufacturers have really made a name for themselves through good marketing, word of mouth reviews and solidly performing products.

For this review I ordered the 27″ shaft 10K antenna from a website advertising discounted Predator 10K antennas. While the website was less than stellar for looks the ordering system was secure and used PayPal. After shelling out the dough my antenna arrived in 3 days which was a very fast turnaround time. 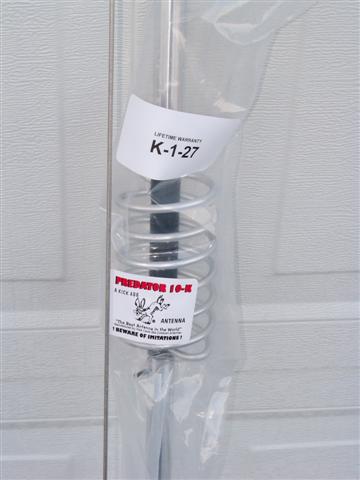 The single coil antennas (any length) are $58.50 + $20 shipping for a total of $78.50. The first question many people will ask is why would you buy a $80 antenna when you can buy a 102″ SS whip from Radio Shack for $20? The 102″ stainless steel whip is the antenna that most other mobile antennas are compared against for performance.

1) Easily tunable – these antennas can be tuned for just about any install.

3) Less bend at highway speeds – long whip antennas will bend in the wind and that can cause your SWR change while on the road. Predator 10K antennas are stiff and suffer very little (if at all) from SWR changes due to wind. If you’re running 1,000 watts of power you don’t want your SWR to jump up to 1.5 unexpectedly.

4) Power handling – these antennas can handle multiple thousands of watts while many other CB antennas you might see at your local truck stop are only rated for a couple of hundred watts.

Let’s make an important point before we go further. If you run a basic CB radio system and you only ever talk to your buddy 1 to 2 miles away while out 4x4ing you probably shouldn’t spend money on this antenna. High quality coil antennas are really aimed at the market that is serious in their CBing – the guys who shoot DX everyday and/or run amplifiers.

So now that we’ve cleared the air on why you might buy one of these antennas lets continue with the review.

The antenna comes in two pieces – the main shaft/coil section and the steel whip antenna with large static ball. Also included is the Alan wrench for adjustment of the screws that tighten down on the steel whip and hold it in place. 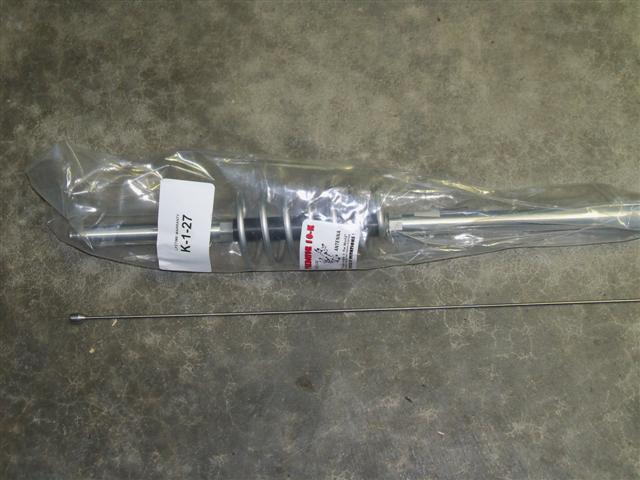 The antennas are made of light weight aircraft aluminum and are precision machined (verbiage straight from their website). Upon inspection I found the antennas to be very nicely finished and indeed it was some of nicer work I’ve seen on a CB antenna. The antennas are designed in sections so that if one part breaks you can replace it without having to replace the entire antenna. 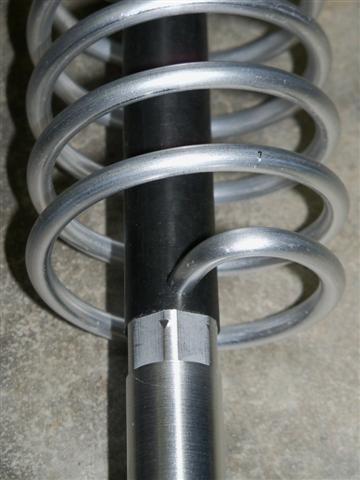 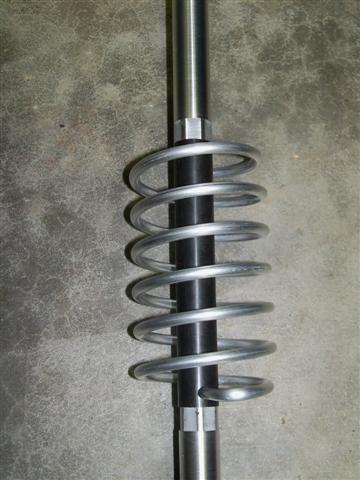 When you’re ready to put your antenna together you simply slide the whip section into the main shaft and then tighten the Alan screw down to secure the whip. There is some space inside the shaft for adjustment so you can slide the whip up or down to tune for best SWR. 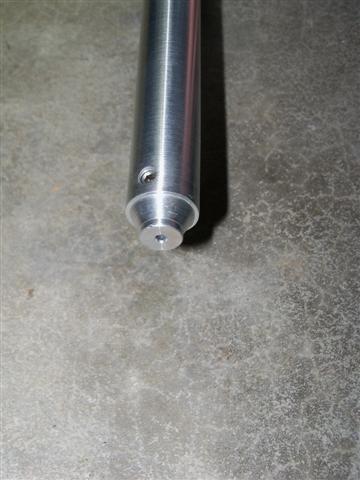 At the other end of the antenna is the threaded 3/8 inch section which will mount into any generic antenna mount but keep in mind these aren’t small antennas and a heavy duty mount would be recommended. 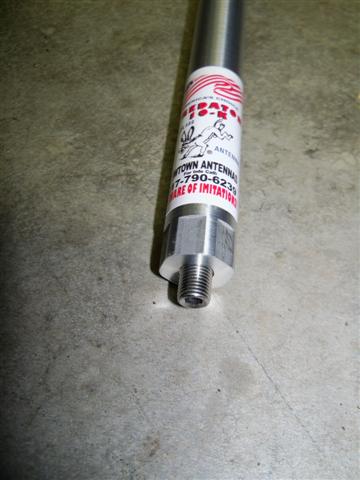 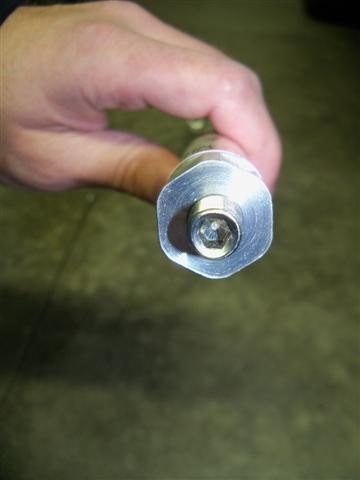 The antenna itself is well made and strong but I would like to point out that when we talk about Monkey Made or Predator 10K antenna’s as being beefy there are others on the market that have some size to them. I think an interesting example is the Workman Viper I tested recently. The whip diameter on the Viper makes the 10K whip look downright small, but size isn’t everything and as we know from our experience and others who have used the 10K the diameter of the whip works fine and can handle large amounts of power. 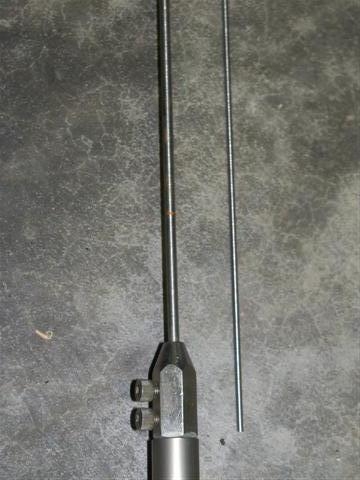 Let’s get down to the nitty gritty and talk about how well the antenna works. For tuning I did have to trim 4″ off the antenna for my particular install which didn’t surprise me as I had to do the same thing with a couple of other brands of antennas that I installed in the same location. I was able to tune down to a 1.1 – 1.2 SWR and the MFJ-259B showed we were very close for ohms with very little reactance.

I then spent a week talking locally and DX with the antenna and it performed very well. I had no problem making contacts, everyone said I sounded loud and clear. So we determined the antenna performed nicely but we did want to do a couple of tests and see how it stood up to a couple of other antennas.

For the simple test we drove 10 miles away and tested 4 different antennas with a AM deadkey, no modulation and recorded the results with the video camera at the home base. Below is an image which shows the results – CLICK HERE TO SEE THE IMAGE FULL SIZE 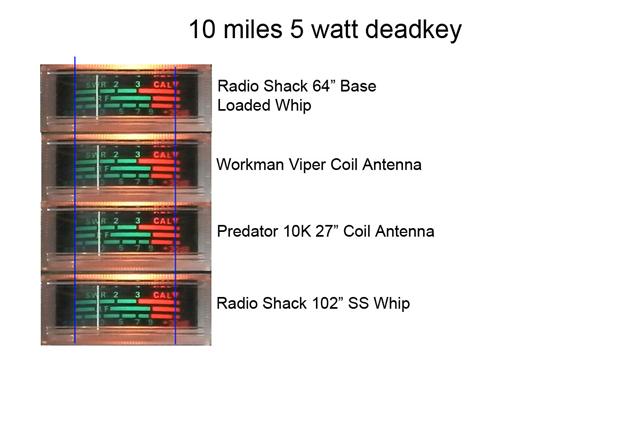 So to discuss the results – first off you’ll notice the Predator 10K did beat out all of the other antennas in terms of recorded signal. Before everyone goes all crazy though “saying there’s no way a coil antenna can beat a 102″ whip let me point out that I repeated the test on a second vehicle for all antennas and in that test the results looked very similar EXCEPT that the 102” beat the 10K in that install looking very similar to the image above.

Now the part of the test above that might surprise people the most is how close all of the antennas were in performance and that is something important to keep in mind. No matter what claims the makers of all the different antenna companies make you most likely won’t see a huge difference in performance between antennas that are somewhat similar. To add a caveat to that, in SOME cases different antennas can perform drastically different so the thing to remember is that there is no such thing as one antenna that works best in all installs.

We won’t go into a huge discussion regarding bandwidth since a good friend of ours previously wrote a great article for this site which dealt with the Predator antennas in detail as well as some competitor models.

After all this discussion some might now be asking if the antennas all measured so close then what is the real difference between them? The answer is really the key to buying your next antenna – quality in manufacture, ability to tune, durability, weight, footprint, and power handling.

When you look at the Predator 10K and then consider those reasons listed you find out why this is one of the top selling coil antennas. It’s lighter than the competition, it’s well made and the parts are aluminum so no rusting, it’s easy to tune for a low SWR, it’s durable and if it does break you can replace the parts easily, it can handle a whole lot of power (25K) and it carries a lifetime warranty against manufacturer defects.

The only thing it doesn’t win is the footprint category – it has a large footprint and it’s a big ass antenna but so are most of the coils on the market and it’s still shorter than a 102″ whip.

I’ve tried a lot of antennas over the years from simple magnet mounts, to oil filled antennas, to basic fiberglass whips, to 102″ steel whips and I’ve found that while the difference in actual performance on the air from one antenna to the next may not always be huge on a signal meter, there can be a HUGE difference in the quality of antennas.

When you find yourself looking for an antenna that can handle the power from an amplifier, can tune for a low SWR, and is durable and well made then I’m sure at some point you’ll take a good look at the Predator 10K line of antennas.