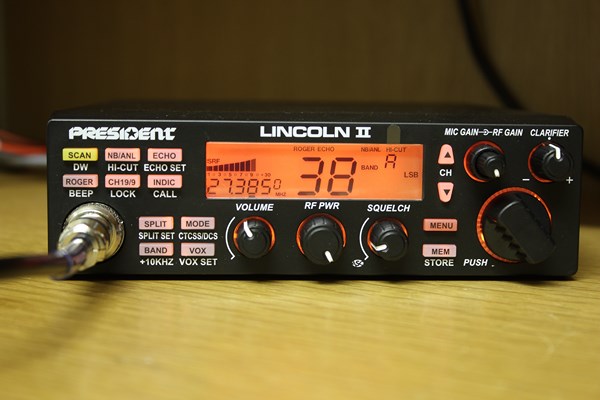 The original President Lincoln radio stands as one of the all-time favorite radios of collectors in our hobby. The radio had great receive, clear transmit audio, and easy to navigate functions designed for the more serious operator. It’s been quite a long time, but President radios has released the new President Lincoln II and it definitely is a feature-filled radio. Currently the radio is only available for sale in Europe but some distributors (including Yeticom) are now carrying the radio and have it available and will ship to North America.

The radio is quite small (same width as the CRE 8900, but slightly longer), and inside the box you’ll find the mounting bracket, microphone, mounting hardware, and power cord. The power cord is a standard 3 pin but is of a nice heavy gauge. The radio styling is quite modern and the buttons and knobs all have a very solid feel to them. The microphone is a 6 pin with up/down buttons located on the top.

The radio has a large heatsink and on the back of the radio is the 3 pin power socket, PA and EXT speaker inputs as well as CW, VOX, and Data inputs.

When you power on the radio, the screen and buttons will glow orange, but as this radio has multiple colors, it could just as easily be adjusted to green or blue. The Volume control is the on/off switch and the display pops up showing your signal meter, channel, frequency, along with a number of other indications for additional features such as roger beep, echo, ANL/NB, etc.

One of the first things I noticed about the radio is that as I turned the volume knob, the display on the radio showed a number value associated with where the volume had been adjusted. If you like to set your radio to a specific volume every time you turn it on, this could be very handy, The same works for the squelch knob, RF gain, and the microphone gain. It doesn’t work on the RF power, which is unfortunate as that would be nice for setting power output consistently.

This radio has a ton of features, as well as additional features available in the menu. Some of the key features of this radio are as follows –

To read more about all of the features download the Manual HERE, or watch my video overview of the radio at the bottom of this article.

The radio puts out 30 watts SSB, 30 watts FM, and around 20 watts AM in stock form. The RF power can be turned down to around 2 watts on AM and the radio will swing to around 8-10 watts. Much like the CRE 8900, in AM mode the radio won’t swing to the 30 watt peak numbers from a low deadkey. This isn’t a Magnum S-9 type radio with 1 watt deadkey swinging to 50 watts peak on AM. After tuning adjustments SSB output is very strong and around 50 watts (I plan to run my radio at the higher SSB output to see if the radio runs into any heat or transistor issues long term).

The receive on the Lincoln II is average, kind of in the mid-range in comparison to most export radios. The receive clarity was fine for me to hear and understand stations in most cases, but it’s a bit noisy and I’d say it’s not as good as the Grant II, CRE 8900, or 2950DX. Additionally some stations testing these radios in the U.K. reported some warble when strong signals were being received (I myself didn’t encounter this issue to the same extent as these other stations showed in their videos). I’ve heard that these early operator reports have already reached President and they are working on receiver improvements, so I’m guessing the next run of these radios from the factory will feature better receive characteristics.

UPDATE: President has released fixes for the receive issues. That was quick.

The modifications have been done to the radio and the difference is quite noticeable. The receive is clearer, stations seem to be louder and more understandable, and overall the noise level has dropped so listening is much quieter overall. I would put the receive on par with the 2950DX at this point and it really is much improved after the fixes. New models should have the fixes done from the factory so there shouldn’t be any need to do them yourself.

The sound level is audible, however it could have been a bit louder, especially for in a mobile environment where I find myself having to turn the volume up to the half-way point. It has a fairly small internal speaker so it could benefit from using an external speaker for better audio quality.

SSB stability on these radios is excellent, as you would expect for a radio that is aimed at the serious SSB operator. In below freezing temperatures there was a couple of minutes of warm up required, but after that the radio was spot on frequency during operation.

In the three weeks of testing I had station after station commenting on the quality of the audio. I recorded myself as well and was impressed. It’s very clear and natural sounding.

This is one of those radios where they took the right ideas and made them work as part of the final design. The layout of the functions and features is quite easy to use. I love the single push on the channel selector to adjust the tuning steps. The echo has a button for on/off and adjustments are done in a menu so no need for additional echo knobs on the face of the radio.

Saving frequencies to the memory slots is quite easy, as well as flipping through them once they are stored. Switching between the bands is also very easy; no need to flip a selector knob to get into the different bands. You can either use the band button, or use the channel selector like a VFO control. The quickest way is to save your favorite frequencies in the different bands to the memory slots and then you can simply go to that memory frequency and explore that band with the channel selector knob. It all works very well, especially compared to something like the Stryker 955 where navigating the bands was much more difficult.

As the radio has a 6 digit frequency display and you change the tuning steps all the way to the 6th digit, there’s no need for an “unlocked” clarifier. You can tune anywhere you want with this radio which makes it better for 10 meter operation than the Grant II.

This radio does have additional frequencies available, but to access them does require a modification. Please see the white wire in the image below. 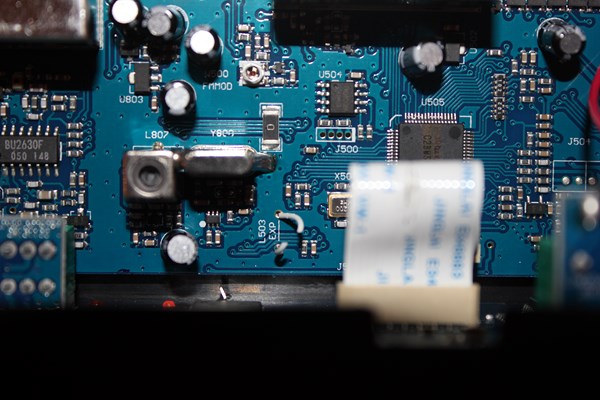 INSIDE BOARD AND ADJUSTMENT LOCATIONS

The radio uses surface mount technology so everything is very clean on the main board. At the back of the board you’ll find the transistors and the radio uses nice thick wire for the coils. The potentiometers are continuous turning but are all labeled so you can easily know where the SSB, AM and FM power adjustments are located as well as the modulation. 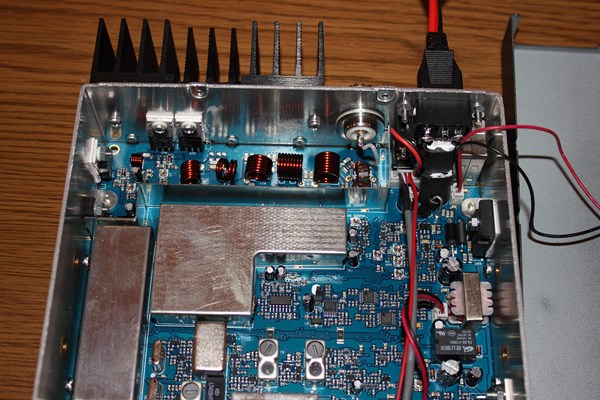 After waiting for a long time for this radio, I can report that the features, size, functions, and SSB audio performance are all on target. The radio puts out good wattage in all modes, received glowing on-air reports, and is just the right size for most vehicle installs.

As mentioned previously the receive is average, but usable. For a radio at this price level though, and at the top of the line, I think it could be improved upon, especially if some users reported issues that needing fixes. I definitely think it has the potential to be better, especially since so many other parts of the radio work so well.

As far as my real-world testing with the radio, I really enjoyed using this radio. I found it so easy to go back and forth between 10 and 11 meters. Jumping in between frequencies was easy and the way the channel selector works to take you from one band to the next in a continous manner is just excellent.

The build quality on the radio is really nice, everything feels solid with my only complaint being that the controls on the radio are a little tight for big fingers in a mobile environment, but the size of the radio is great for putting in a vehicle.

President came very close to hitting a home run with the radio and the SSB audio is just rocking. If they can get the receive tightened up a bit on the these radios then this could be a must-own radio for the serious operator. For now, it’s a great radio in so many ways, but with average receive.

UPDATE: After doing the modifications to the radio I can say it changes my overall view. Previously I felt like it had the potential to be a really good radio but a radio that doesn’t have a good recieve just isn’t doing what it was built to do. Now that the receive has been improved I feel like the radio is now the complete package. I’ve found it very easy to use, especially for quickly moving from the CB band to freeband to ham bands. The noise floor has been lowered so it’s quieter, and I find listening to stations much easier.

If you can get one of the newer models with the fixes done from the factory I would now feel totally comfortable recommending the radio. The price for us here in North America is still pretty steep so you’ll have to really think about if you want to shell out the dough (a used Icom-718 is around $450), but the Lincoln II is definitely a strong performer and I’m easily making contacts barefoot with the 40 watts of output. It has more options than a 2950DX, more output, and after the fixes now has a receiver to match up with the rest of the radio. We can’t comment on the long term durability but I’m hoping it will last many years. It’s currently being used in the mobile daily to replace my CRE 8900 that has developed some quirks after only a year and a half. I’ll try to post up an update again after 6 months. 73’s