It’s been a long time since we’ve had a new radio to review and that really is due to the fact that not a whole lot of interesting new CB or Export radios have hit the market in the last couple of years. So it peaked our interest when we saw that President was releasing a new SSB CB radio for the U.S. market.

The radio has been out for over 6 months, but the CB community has recently started to take notice of this slick little SSB radio and realize that it has some very interesting features we haven’t seen before. We’ll take you through our overview in this article and we’ve also posted our traditional video review below in case you want to skip the reading and jump right in.

The President McKinley is a FCC type accepted CB radio and it is completely legal to buy and use in the U.S. The radio itself is small and is a DIN size radio, meaning it is designed to fit into the stereo slot in your vehicle dash. The radio comes with a microphone, power cord (standard 3 pin), and mounting hardware. For mounting, the radio features single thumbscrew holes on the sides.

The radio is similar in size to the Uniden 980 but the styling is completely different. While the Uniden 980 front face looks a lot like an aftermarket car stereo, the President McKinley has a very simple utility look to it similar to two-way business radios. It only has three knobs (two are dual controls with inner and outer adjustments) and 5 buttons. The LCD display is large and easily readable.

As radios add more and more functions it can be difficult for manufacturers to figure out the best way for the user to access all of the options. The McKinley keeps is very simple and it’s user interface is one of the best I’ve seen on a newer digital CB.

There are three knobs on the radio –

1) Power / Squelch / ASC – This is a dual pot control with the power/volume knob being on the inside and the squelch knob on the outside. The squelch knob in the full counterc-clockwise position activates the ASC (Automatic Squelch Control) in AM mode.

3) Channel selectors / Menu – This knob serves as a channel selector that you can rotate and if you push the knob you can access the radio menu functions.

MODE / PA / VOX –  used to select your mode (AM, USB, LSB). If you long-press the button it turns on the PA. If you long press it while keying the radio you will enter the VOX mode.

WEATHER / ALERT/ M1 – puts the radio into weather mode where you can listen to weather broadcasts. A long press will turn on the weather alert function. When used in conjustion with the memory button this button will store a channel and mode in the memory 1 (M1) slot.

F/ MEM / LOCK / MIC GAIN / RF GAIN – Used to select or store memory frequencies in one of the 3 available slots. Lock will lock out all controls so nothing can be changed. Mic gain can be accessed when pressing the button with the radio keyed. RF gain can be accessed with a double press in RX mode.

RF Power – the above button also allows you to set your RF power if you press the button while keying the radio. You will use the channel selector knob to increase or decrease power. 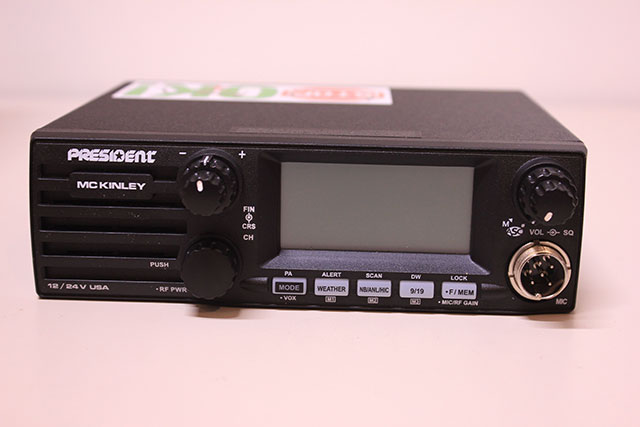 The microphone features up-down buttons for selecting channels and is lightweight. The radio has a 6 pin microphone connection. 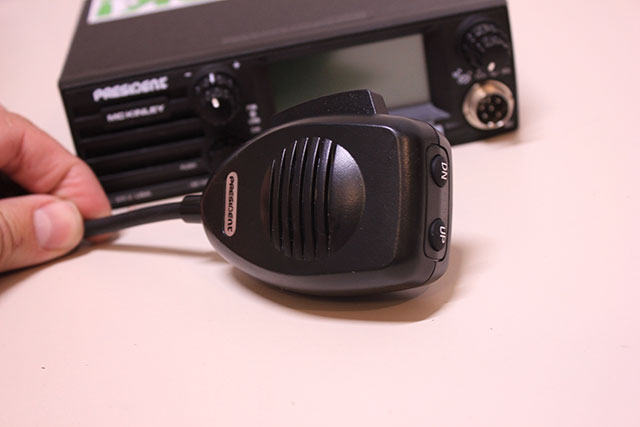 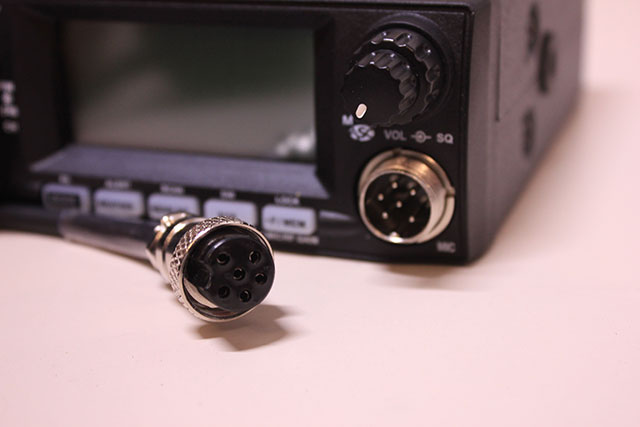 Color – You can choose between orange, blue, or green

Dimmer – Allows you to adjust the brightness of the backlit display

Key Beep – In the ON position any button press or channel change will make a beep. This may be turned off.

Roger Beep – In the ON position there will be a quiet beep at the end of your transmission.

SWR – This function allows you to test your SWR, no calibration is required and the radio will automatically key itself during the test. It will make a long solid tone for a good SWR and a beeping tone for a bad SWR.

Tone control – You can adjust the tone of incoming stations so that lower or higher tones come through the speaker. 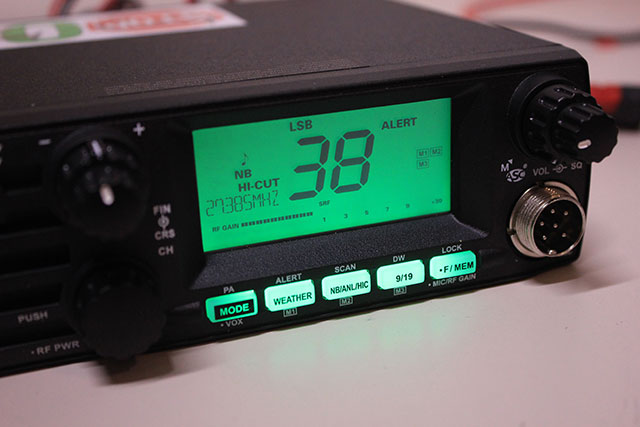 A NEW TYPE OF SWR TEST

This radio uses a brand new type of SWR test. Gone are the days of calibrating your meter and then fliping over the switch to test your SWR. This radio does it all for you. You simply navigate to the SWR test in the menu functions and then the radio will begin it’s own test and will key the radio. It takes SWR readings and then emits a tone to let you know if the SWR is good or bad while displaying the SWR numerically on the screen as well. It’s one of the most hassle free SWR testing methods we’ve ever used. A long steady tone means your SWR is good while a quick beeping tone is bad. The slower it beeps the worse your SWR.

The display on the radio is very easy to read. It shows the channel in large digits while also showing the frequency in the lower left in a smaller size.

The receive of the radio is on par with any of the other digital radios we’ve tested in the last 5 years (President Lincoln, Anytone 6666/5555, CRE 8900, Stryker 955). As we’ve described in other reviews I find these newer radios to be a bit noiser than my older Uniden Grant or Cobra 148 radios, however their receive sensitivity is similar and receive levels were completely acceptable while listening to both locals and DX. The front firing speaker on this radio really has a nice sound to it even though it’s pretty small.

This is a single final CB radio that was designed to pass an FCC inspection and will do the standard 4 watt output on AM and 12 watts on SSB. With some extra tuning you will see around 15 watts output but this is not designed to be a huge output radio.

While many of the newer CB radios have been lacking in audio on AM and SSB I found that this little radio had some good audio and while not overpowering it was definitely more punchy than some other radios I’ve tested. With the addition of an aftermarket microphone I felt it sounded quite good. The stock microphone isn’t fantastic as the microphone element is actually hidden behind some plastic so based on my tests I would recommend an aftermarket microphone with noise cancelling.

One of the big issues with many of the standard SSB CB radios produced in the last 10 years is that they weren’t great when it came to frequency stability. The Galaxy 959 was one of the more popular SSB CB’s because of it’s many features, but it suffered from some serious frequency drift making it a pain to operate on SSB until it got warmed up. The Uniden 980 featured improved SSB stability and the McKinley also features strong SSB stability. Over the time I’ve been testing it in the vehicle it has been on frequency every time I’ve turned it on. It will be interesting to see how it performs in the vehicle after a cold winter night but so far I’m very impressed.

I know the freeband crowd will be asking “can it be modified for extra frequencies”? (above and below the standard 40 channels). The answer is no, and it probably won’t ever be able to be modded. Much like the Uniden 980 this radio is designed to pass FCC inspection and because of it’s digital design it’s not just a matter of snipping a couple of wires or adding some switches. I’d love to be able to use extra frequencies on this radio but if you need the extra frequencies there are more than enough export radios available to satisfy your needs, including the President Lincoln II and the President George.

With cars getting smaller and less places to mount a CB radio, I’ve fully adopted the in-dash install. I’ve installed a CRE8900 and President Lincoln II in my dash previously, but because of their depth they stuck out a bit which wasn’t a very clean look. I also tried to install a Uniden 980 in my dash but it didn’t fit. It was slightly too tall to fit beneath my existing stereo without modding my dash. The President McKinley is the first in-dash radio that I feel has completely hit the mark for size and function. Not only does it fit perfectly in my dash, it also has a front firing speaker which is absolutely necessary for a proper in-dash install.

SUMMARY OF OUR INITIAL TESTING

We all love to hear about features and color changing displays but when it comes down to business you need a radio that can perform. I’m only 2 months into my testing of this radio but so far it has performed flawlessly and I can honestly say that this is the CB SSB radio I’ve been waiting to see for years. It’s a perfect blend of technology, clean styling, and performance.

It has all of the features a SSB CB’er could need and the addition of the variable RF Power really makes it handy for those who like to add an amplifier to talk a little further. While the roger beep is lacking in volume, every other feature works as intended.

Modulation was a bit quiet but that’s to be expected on a factory CB designed to pass FCC inspection. The AMC pot is labled inside the radio and it was easy to turn it up to 100%. The power also was a bit low (again to pass possible inspection) but we were able to get a little more juice out of it. Ideally, for those who want to talk further, the addition of a KL203 amp would match up perfectly with this radio’s 1 watt deadkey (when the RF power is at minimum) and would provide you with 100 watts of output on AM and SSB.

I did find the stock microphone to be a bit muffled – as shown in my videos it’s hidden behind some plastic so I highly recommend an aftermarket noise cancelling power microphone for best results.

Price on this little guy is a bit high at $199 – they were offering a factory rebate through 9/30/17 but that’s ending shortly. It will be interesting to see if they extend the rebate or adjust the MSRP this fall to compete with the Uniden 980 (MSRP $189 but it’s available for around $140 on most sites).

Let’s talk about who this radio is targeting. If you are a CB’er who sticks to the regular 40 channels but wants a SSB radio that offers newer technology and frequency stability this is the radio for you. The freebander crowd will probably pass this one over for the export models and the CB’ers who still prefer their 30 year old Uniden Grant or 148 may not bite, but this radio certainly will find a following, possibly with the younger generation of CB users. It’s size and mounting options make it a good fit for today’s modern vehicles while it’s stability and simplicity will make even older hardcore CB’ers happy. 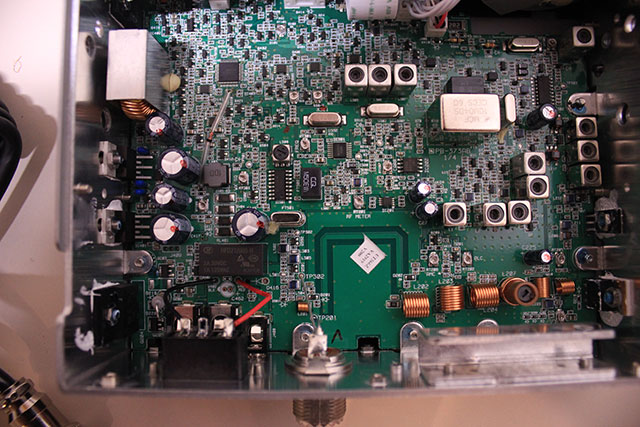 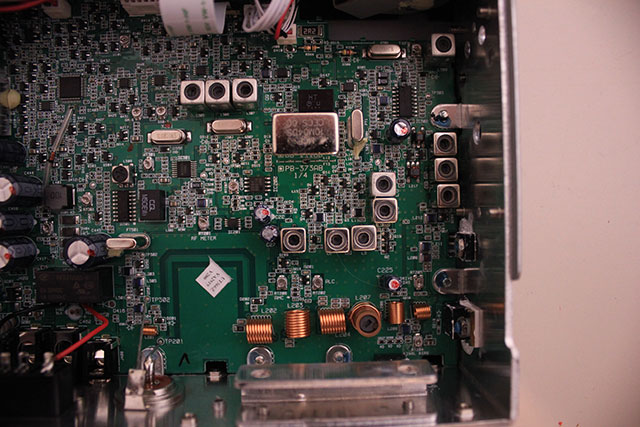 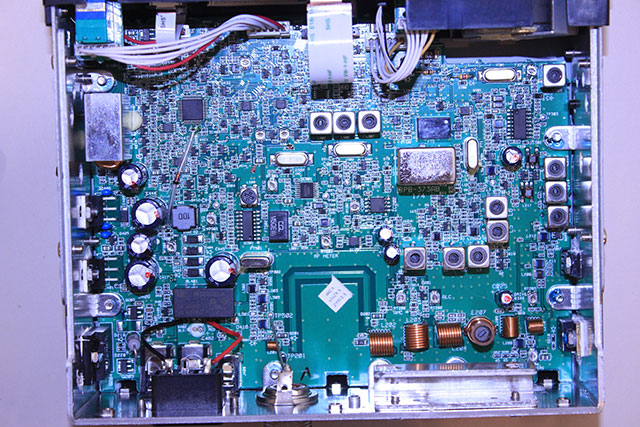