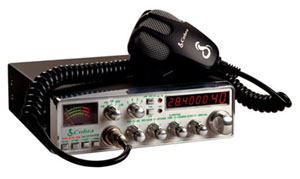 About a year ago the new Cobra 200 GTL debuted and I was really excited. It’s was a 10 meter radio that could be converted for CB frequencies. It had dual finals and people were saying it would do 100+ watts straight out of the box.

I had been running a General Longstreet plus a small amplifier and I thought that it would be really nice to run a radio that would give me enough power to talk locally and some SSB DX without an external amplifier. Less space taken up in the car, less wires, it seemed like a great deal at $229.

Many people follow the same line of thinking. They want a powerful radio that will have a higher output and allow them to talk farther without having to bother with all the trouble of the external amplifier. The truth though is that a radio with a powerful internal amplifier circuit can be a good thing…or a very bad thing.

Most of the powerful dual transistor radios use multiple 2SC2290 transistors to achieve their output. In radios like the RCI 2970DX or the RCI6900F Turbo this amplifier circuit is mounted in its own portion of the radio on the lower side with a large heat sink and fans.

And that to me really is the key to a good or bad high power radio. The cooling system.

Of course there are other things to consider such as RF shielding, quality of manufacturer, features and more. But heat is really a killer when it comes to electrical devices and radios in particular. A cool radio is a happy radio.

When a radio has a high power internal system heat is generated more quickly and needs to be dissipated just as fast. Most manufacturers will add a heatsink with cooling fins but in many cases this isn’t enough.

My Cobra 200 GTL had a heatsink but died after only a few short months of operation. A large number of people who owned these radios had the same problems and I suspect a buildup of heat is to blame. The Cobra 200 GTL did not have a cooling fan, something other high power radios do incorporate into their design.

Last year I also owned a RCI 2970 radio which I ran for a short time. This radio had a much heavier feel than the Cobra 200, had a more solid feeling heatsink, and most important – it had a fan installed in the transistor area which kept the radio cool. Although the radio would heat up during use it never seemed to get hot to the touch, just slightly warm.

So once you’re aware that choosing the right high power radio involves picking one that will stay cool, now you’ll have to keep your cool when looking at the price.

So it’s a tough decision to shell out more money for something you know won’t give you the same bang for your buck. But once again, the allure of having the “do it all” radio in one package is very appealing.

One other thing to consider is that on many of the high power radios, there is no way to turn off the high power of the radio, most have variable power so you can adjust for a lower deadkey, but even on low these radios are putting out way more than a standard CB which is good for shooting skip or talking a couple of miles, but bad when your buddy is a 1/2 mile ahead of you on a road trip. Your setup might be a little overkill if you do a lot of short distance communications, but anything over a mile and it probably won’t make a huge difference.

So what kind of decision is it to leave your old radio and amplifier behind to go with the high power radio only? It’s a tough decision.

In my experience I really have found that the convenience and performance of the high power radio is not worth the price. This isn’t to say that I don’t like the radios or that many of they are bad performers…quite the opposite, I loved the 2970DX, it’s a great radio and I had no problems talking DX. But for a price I bought mine ($300), the 150 watt output really didn’t make the difference.

I recently picked up a old used Grant XL and a Palomar 225 amplifier for less than $100. My output is close to the RCI 2970, actually it’s a bit better.

To me that really solidifies my decision, but for others having the biggest and baddest barefoot radio may more than make up for the high price tag.