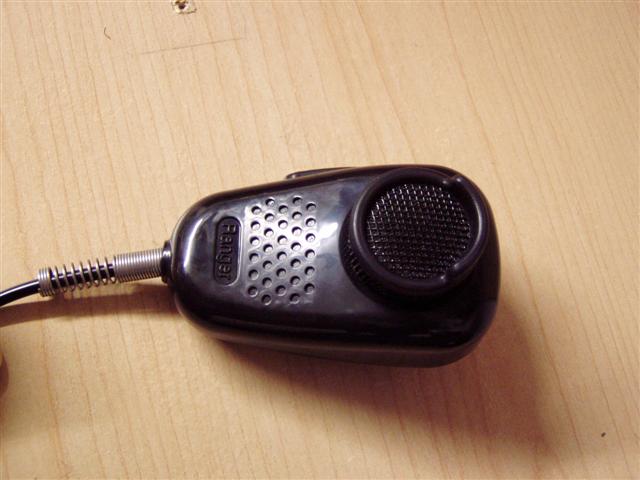 As we’ve mentioned before it’s tough to do microphone reviews, because different people often sound so different on the same microphone. Added to that, microphones can sound different on different radios. So when people ask me which mike is best for them on a particular radio it’s one of the hardest recommendations to make. One easy thing to do though is to test how well a microphone does what it’s designed to do and that brings us to the Ranger SRA-198 Noise Canceling Microphone.

We received this microphone a number of weeks ago from Ranger and have been using it in the mobile and the results so far have been excellent. When the earlier version of this microphone was released Ranger got a couple of comments that the microphone had muffled audio, so they put the engineers to work and added a couple of additional components (a 4.7K resistor and 0.022uF capacitor).

Let’s start at the beginning and give a serious run through of this microphone.

When you first pick up this microphone right out of the box you’ll immediately notice that it doesn’t feel like a hollow piece of plastic. Just like on the highly popular SRA-158 this microphone has a metal weight inside the microphone designed to give it a more solid feel in your hand.

The microphone cord itself is very flexible and is slightly smaller diameter than is employed on other models. It uses a 9′ coiled cord which provided plenty of length and I experienced no issues with kinking or knotting during testing in the vehicle.

Where the cord enters the actual plastic housing they’ve included a coiled metal spring wrapped around the cord to help prevent damage or wear at that location from bending during use. 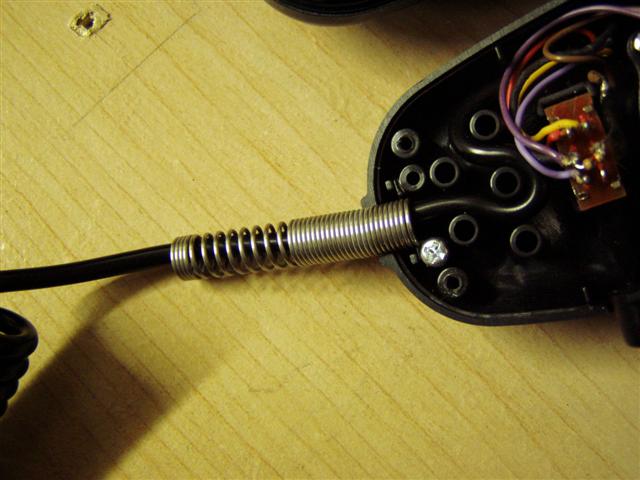 They used a smooth plastic for the element housing and while it feels very solid and durable it has a very soft feel in the hand. I think this is due to the way they shaped the microphone to fit the users hand. If you look at the microphone from the side you’ll see it’s curved profile which is quite unique.

You also will immediately notice the large grill with lip guard protruding from the element are of the microphone. It sticks out a lot farther than we’ve seen on other models, but once we take the microphone apart you’ll see why.

We often use items for years without ever bothering to see how they work and so one of the first things I always do with new equipment is to take it apart. 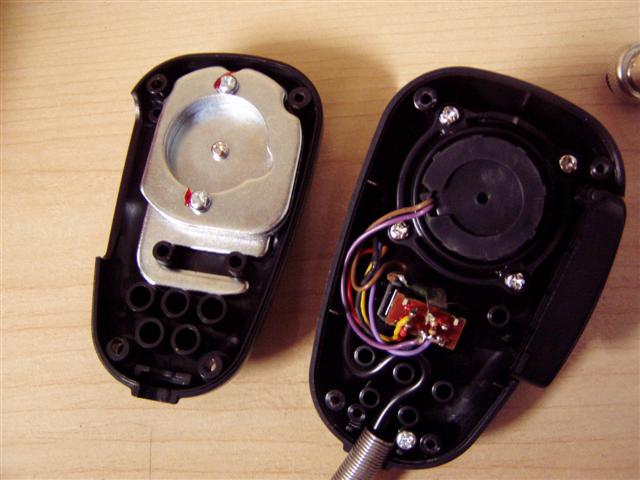 Next you can see the element side of the microphone housing where the PTT switch is located and you can also see in this picture the resistor and capacitor that Ranger added on the 2nd generation model.

Last we give you a good look at the noise canceling element and the foam that sits inside the large grill that protrudes from the front of the microphone. 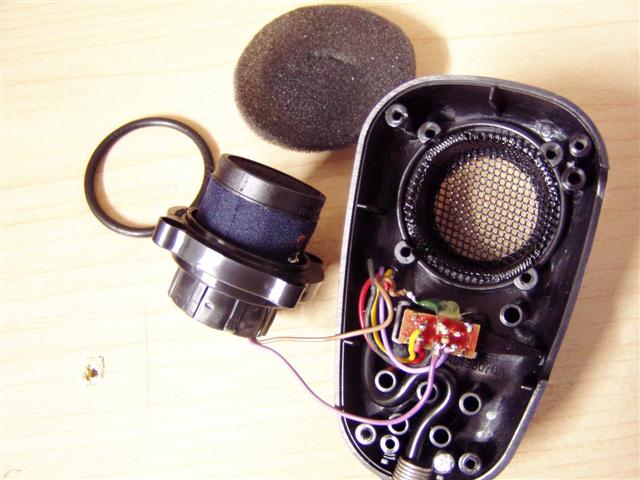 I tested this microphone on multiple radios and for the majority of the testing paired it up with a Superstar SS-158EDX. After running the SS-158EDX on a couple of trips in the last month I was well aware that at freeway speeds the stock microphone I was using was picking up a lot of road noise in the background. Even with the microphone gain backed down to less that 11 o’clock you could hear quite a bit of noise at 70 mph down the freeway.

So when I went to test this microphone I had a very good baseline of noise to compare against and I really wanted to see how much the noise canceling ability of this microphone would reduce that noise.

One of my first chances to test this microphone was a couple of hours down the road when I rolled through the town of a good friend. At 70mph I asked him if he was hearing any of the road noise that had been problematic with the stock mike. He responded that he wasn’t hearing any road noise in the background. I then opened both the windows in the vehicle (greeted by a blast of cold October air) and asked him for a second check. Again he came back and said he wasn’t hearing the background noise like previously.

I then did some recordings from the mobile about 5-10 miles south of my receiving base station. While on the freeway back and forth I did multiple tests with the windows open and lots of wind buffeting through the cab of the vehicle. When I listened to the recordings later I heard little to no background noise and the audio was loud and clear. After doing multiple tests I feel confident in saying that the noise canceling abilities of the microphone are excellent.

Compared to the stock SRA-158, the SRA-198 wasn’t quite as loud but this is the case with most noise canceling microphones and that’s to be expected as their intended design is to quiet things down. If you are running a basic radio such as a Cobra 25 LTD and you’ve had no modifications and are using the stock microphone you probably aren’t having problems with road noise and a noise canceling microphone isn’t going to give you a boost in audio.

But on a high quality CB or export radio known for loud audio that’s had the AMC (Modulation) turned up, background noise can be a big issue for a lot of drivers. And when I say this noise canceling microphone is quieter compared to the SRA-158 by no means is it lacking in audio response – during testing I was able to run the microphone gain at 12 o’clock and had plenty of audio to spare.

The microphone tends to be a little bassy which for most people will be a positive thing, although if you already sound like Barry White it might be a little too much. The radio has a very wide frequency response of 50-15,000Hz which is much larger than many of the models currently on the market.

I found that for best results and clear audio you didn’t need to hold the microphone right up to your mouth, about 2-3″ inches distance worked the best. When I had my mouth right up against the element it seemed to overload just a bit so no need to jam your face right into it or shout.

The PTT button is another thing I like about this microphone, it has a very short play so you don’t have to have a whole lot of movement to engage the microphone. While this may sound trival if you do a lot of talking down the road a shorter travel when having to depress the button can make it easier on your hand. Compared to a microphone like my D104-M6B this button seems amazingly easy and user friendly.

Previously I had wanted to run the mic gain a little higher on my SS-158EDX radio and I was limited by the amount of road noise in my older rig as it just doesn’t have the sound dampening of some of the newer vehicles. The SRA-198 allowed me to actually increase my audio while at the same time cut out the annoying road noise. When you get into running amp systems as well having consistent keys and swing is important – you don’t want your amp keying 300 watts of background noise before you even begin talking. The new SRA-198 made such a night and day difference that it I’ve decided to run it with that radio long term.

While the SRA-198 does have a bassy tone and it isn’t going to provide the overpowering audio of a power microphone I would have no reservations recommending this microphone for drivers seeking clean audio while on the road. Background noise can make it harder for others to hear and understand you and if you are a big DX talker having a clean and intelligible signal is even more important.

Finding a noise canceling microphone that does what it claims can be surprisingly difficult. Some of the cheaper models out there really don’t do much in the way of reducing road noise.

It’s refreshing to use a noise canceling microphone that does exactly what it says in the name.