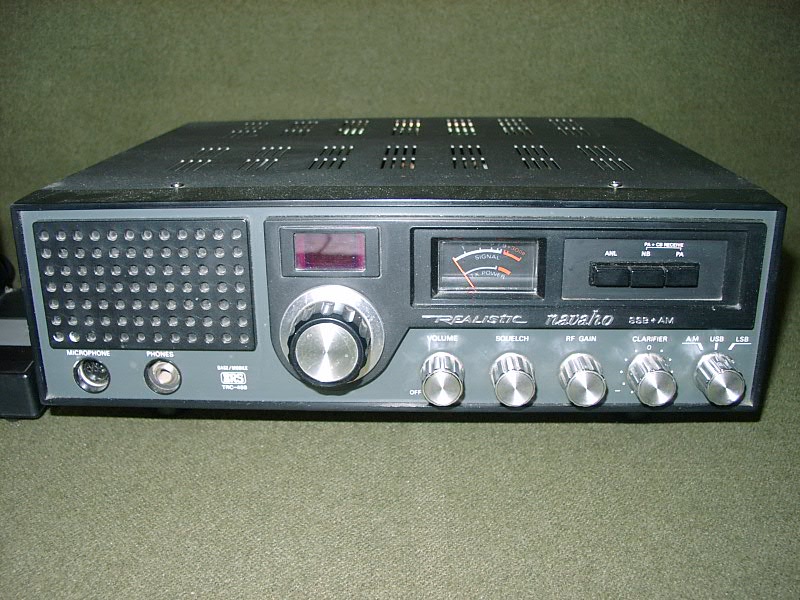 When you mention the brand name “Realistic” or “Radio Shack” when discussing CB radios, most people will assume you’re talking about some small, cheap and crappy CB.

In the last 20 years Radio Shack’s contribution to the CB world has been to flood the market with compact mobile CB radios that just plain suck. But prior to marketing the compact radios they used to make some base radios that could definitely hold their own.

The TRC-458 was a prime example of a quality Realistic CB radio. I picked up ones of these at a local garage sale for $35. The radio had an channel box attached to the top and was minus a power cord. I soldered a power cord to the radio and it powered up and everything on it was in working order. The radio had a stock mike on it so I attached my antenna and gave a shout for a radio check. The locals came back and said it sounded great…clear and loud they told me, great audio and right on frequency on SSB. I was very pleased.

This radio wasn’t really a “Realistic” though, inside it had Uniden parts and that’s the reason it performs so well and is a sought after radio. It used the Uniden 858 chassis and was modifiable for extra channels. These radios were produced for a couple of years in the late 70’s.

If you like SSB base radios that keep it simple than the 458 is a great choice.

It has the following features –

This radio is very user friendly with a nice big knob to change channels, simple LED display, and a large meter. The radio has a rectangular design and a solid case – the one I bought looked used and abused but still worked perfectly.

I noticed right away when using this radio that it had a great receiver, picking up far away stations very easily. The clarifier has great movement and tunes easily. The particular radio I had been modded at some point as it had a special box on top that expanded the frequency range and it also was fitted with a fine tuning clarifier that offered very precise tuning on SSB.

The modulation and swing on this radio was impressive, easily posting better output numbers than my Uniden Madison. SSB was peaking around 22 watts and AM would swing a solid 15 watts. Modulation with the stock microphone was very good. I had no doubt that this radio had been tuned previously for output and modulation.

The NB and ANL work okay on this radio but didn’t cut out a whole lot of static, but the receiver was pretty quiet to start with so it wasn’t a huge issue.

I really didn’t run into any problems with this radio but there were a couple of things I disliked. The relay inside is quite noisy and made a noticeable click each time I keyed the radio. People on the receiving end said they could hear the switch for a short bit as I keyed up, but said it made a “neat” and distinctive sound. Possibly a little cleaning of the relay would sort this out.

The radio styling on this radio in my opinion is more suited to a submarine or boat. It never seemed to look as esthetically pleasing as a Uniden Madison or Cobra 142GTL.

The microphone jack is the 5 pin din style and from reading some of my other reviews you know I hate them. Pulling too hard on a microphone or side to side movement can often loosen the microphone connection and so I have a serious dislike for that style of microphone plug. If I was going to own one of these long term I’d probably modify it to a 4 pin screw on type connection.

One cool feature of the radio I owned was when I keyed up the meter light switched to a red color making a nice effect in the meter. As mentioned above my radio also has a control box on top to get to the extra channels, it was a very strange looking box and I had not seen one before or since, but it had a three digit display and you manually would change the numbers to move to the desired frequency. It had a roadmap with it luckily as it was pretty confusing to use.

The AC plug style on this radio is a little hard to find a replacement for, I looked around but nobody had a power cord that would easily replace the stock one which was lost. Eventually I just hard wired the power cord into the radio.

The more deluxe version of this radio was the TRC-457 and the later version of the 458 was the TRC-490 which had the 8719 chip in it. The only really noticeable change on the outside between the 458 and 490 is that the ANL and NB button have been combined and a CH9 switch was added. Other reviews online have noted that the 458 was a better performer and more capable radio than the 490. 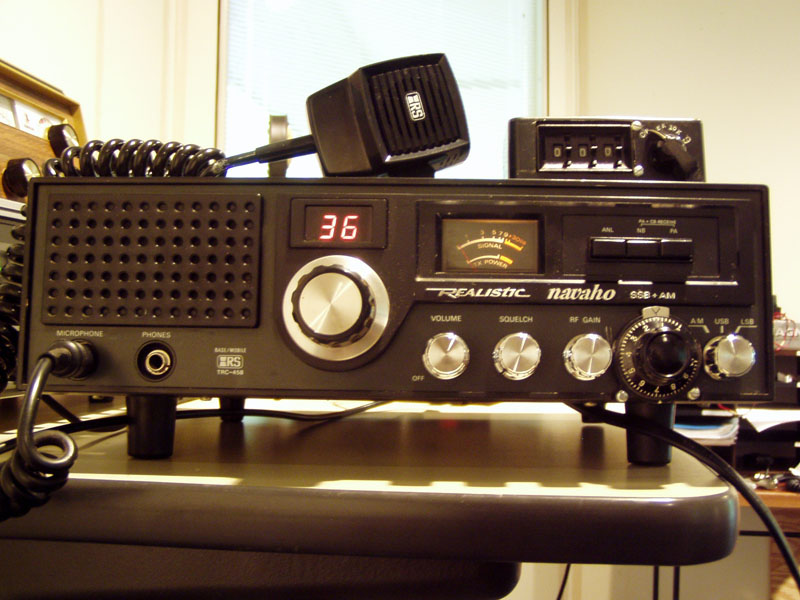