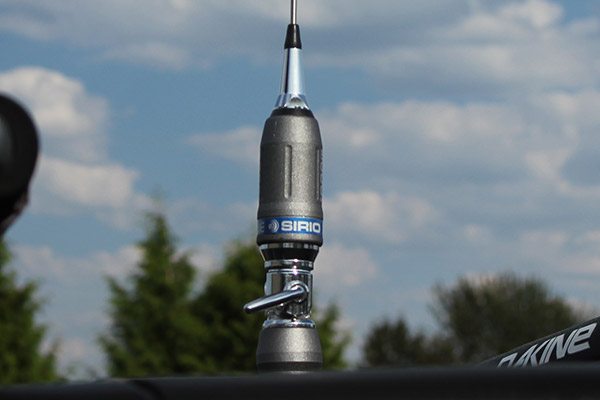 If your Christmas bonus is burning a hole in your pocket and you’ve been looking at buying a magnetic mount antenna, you might just want to read this article before pulling the trigger.

As a long-time fan of the Wilson 1000 and 5000 magnetic mount antennas, I’ve often recommended them to CBer’s as one of the best solutions for a temporary/permanent install and performance-wise they beat just about every other magnetic mount antenna on the market. In addition to how well they work, they also look about as unobtrusive as you can get when you have a 64″ steel whip and base load type antenna on the top of your vehicle.

While I still think the Wilson 5000 is a great antenna, I’ve recently had my head turned by the Sirio Performer 5000 PL, and after reading multiple positive comments on CB forums I decided to purchase one for myself. This article is a review of the Sirio 5000, but also a comparison with the Wilson 5000, since it has been a proven industry standard for so many years.

The first thing you need to realize about buying a Sirio antenna is that there is only one main company distributing them in the United States, H & Y ELectronics.I’ve purchased from them numerous times over the years and while I’ve never personally had any problems, I’ve heard some horror stories. Their website is a little dated and some of their product descriptions aren’t great but they’ve always delivered what I’ve ordered so I personally don’t have any complaints. If you want a Sirio antenna they are the only player in town so be ready to purchase through them.

On their website I purchased the Sirio Performer 5000 PL with Mag 145 PL (listed as item number P-5000_MM). The cost is a little pricy at $93.95 + shipping so this is probably a $100 to $110 antenna shipped depending on where you live. The antenna arrived in a long box and inside were two separate packages, the main antenna and the magnet mount.

The antenna comes with a couple of different pieces that are used in its assembly. The main piece is the largest and is the section upon which the steel whip is inserted. The next piece is the bottom section which connects via a screw with a long bent handle. There is also a black rubber seal that is placed between the bottom section when it is attached to the magnetic mount base. 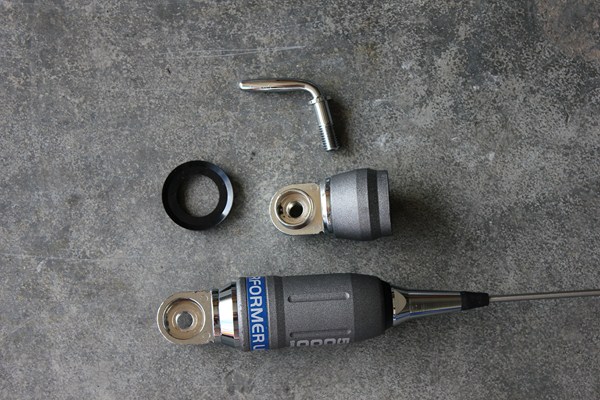 The end of the antenna is covered in a protective plastic tip.

The Mag 145 PL is the magnetic base to which the antenna attaches. It came in its own box and has a male adapter that sticks out the top for the antenna to screw on to. It also has a run of around 13 feet of RG-58 coax that comes out of the unit and is ready to hook up to your radio. 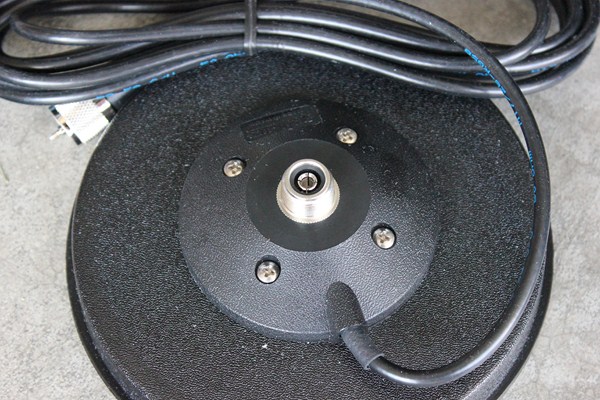 The magnetic base is around 6 inches in diameter and is fairly substantial. It comes with a rubber boot that fits on the bottom and helps prevent the unit from scratching the paint on your vehicle. While the unit is larger than the Wilson 5000 base, it also has a lower profile.

In the image below you can easily see the size difference between the Sirio (left) and the Wilson (right). Aside from the size the other major difference to note is the coax length. The Wilson 5000 comes with around 17 feet of coax while the Sirio 5000 only comes with 13 feet. This was a major complaint for me when mounting on an SUV where my entrance point for the coax was at the back of the vehicle. The coax wasn’t long enough to run all the way to my SWR meter which is mounted in the center console. For smaller cars or different routing methods it’s not a huge deal and you can of course change the coax if you have some soldering skills, but for some people the short length might prove an annoyance.

In the picture above I tried to demonstrate the difference in height between the two units. It’s a little hard to see the base sections in the photo but you should be able to see that the Sirio base load coil extends higher up than the Wilson and that the overall length is longer than the Wilson.

Aside from looks, the assembly of the two units is different as well and the Sirio also has some interesting features not found on the Wilson. A Wilson 5000 consists of three sections: the magnetic base, the base load (coil) and the steel whip.

The Sirio has four sections; the magnetic base, the bottom section, the top section (coil) and the steel whip. The bottom section and top section fit together (see parts picture at the top of the article) and are held tight with a screw with an angled handle. This setup is unique in that it allows you to set the angle of the top section of the antenna. You can have the antenna totally vertical (suggested for best performance), or you could angle the antenna slightly if desired. More importantly though you can loosen the screw and lay the antenna flat (horizontal) if parking in a garage or loading onto a ferry, etc. Or you can just remove the top section for security purposes and lock it inside the car.

The Wilson 5000 can also have the top section removed for parking garages etc., but it has to be unscrewed and then the male connector is exposed so you have to screw on the supplied weather cap.

I mounted the antenna and then proceeded to tune it for my particular install. The steel whip fits into the top section and is held in place with two set screws. Upon mounting the SWR was a 1.5 mid band, but I knew it should be able to do better, so I cut the steel whip slightly to reduce its length. After spending a couple of minutes making some minor adjustments I was able to achieve a near flat SWR. On this same vehicle the lowest SWR I was able to achieve for the Wilson 5000 was a 1.15. The Wilson also required cutting off much more of the steel whip than the Sirio to reach the lowest SWR.

From what I’ve heard from others who have had both antennas their results mirrored mine in that the Sirio appears to tune more easily than the Wilson and for a lower SWR.

The most important aspect of any antenna is its performance and the Sirio 5000 did not dissapoint. I did stationary tests to local stations from the mobile with both the Wilson 5000 and the Sirio 5000 mounted in the same location and both tuned for the lowest possible SWR.

In every test the Sirio received and transmitted better than the Wilson. In terms of measured difference, the smallest noted increase in performance between the two antennas was 1/8 S unit and the highest difference was 1 S unit. More than half of the stations reported at least a 1/2 S unit increase.

While a 1 S unit increase doesn’t sound hugely impressive on paper, you have to remember that generally speaking 1 S unit = 6 decibels, which is a fairly noticeable increase on the receiving end of the stations you’re contacting. If you already have a Wilson 5000, though, it might be hard to justify spending over $100 to get a small 1 S unit (or less) increase in signal.

After doing the testing between multiple local stations and taking readings I decided to do some testing of the antennas for DX. I waited for a day of solid DX conditions and then began testing the two antennas by switching them out while trying to talk to the same stations. While the whole process is fairly annoying (switch box and lots of reaching up on top of the vehicle) it immediately became clear to me that the Sirio had better RX and TX than the Wilson. Stations said my signal dropped with the Wilson and in a couple of cases with weaker contacts I couldn’t get back to the station with the Wilson and once I put the Sirio back they could hear me again.

There are so many factors that make DX possible that one antenna might outperform another on a different day or a different vehicle so it makes measuring two antennas in this format fairly user specific. I will say that after running a Wilson 5000 for 6 months and then switching to the Sirio 5000, I find that making contacts with my barefoot setup (CRE 8900) at 50 watts seems much more consistent with the Sirio.

I tested the Sirio up to 500 watts in the magnetic mount setup without any power handling issues. It’s advertised for 1500 watts continuous and 5000 watts intermittent use. The Wilson 5000 is advertised as 5000 watts continuous and 20,000 watts intermittent use. These advertised numbers aren’t specifically with a magnetic mount setup and are probably more specific to a hard-mounted scenario. While many people do run large amounts of power into magnetic mount setups such as these, I generally suggest if you plan on running more than 500 watts you should take the time to do a hard-mount install. I also usually cut any advertised numbers in half and use that as my max power handling number to play it on the safe side.

The Sirio 5000 was definitely a bit of a surprise to me, especially since I’ve been a fan and proponent of the Wilson 5000 for so long. In my testing it outperformed the Wilson and its construction seems as solid, if not slightly better, than the Wilson because it doesn’t use a plastic housing that is susceptible to UV damage over time.

I think for most people the Wilson 5000 will still be the antenna of choice because it’s more readily available, has a lower price point, and has a more streamlined look when placed on a vehicle. However, for those more discerning radio operators the Sirio 5000 offers better performance at a slightly higher price. While I don’t think I’d run out and buy a Sirio to replace a perfectly functioning Wilson, when the time comes for replacement I definitely know I’d be picking the Sirio. 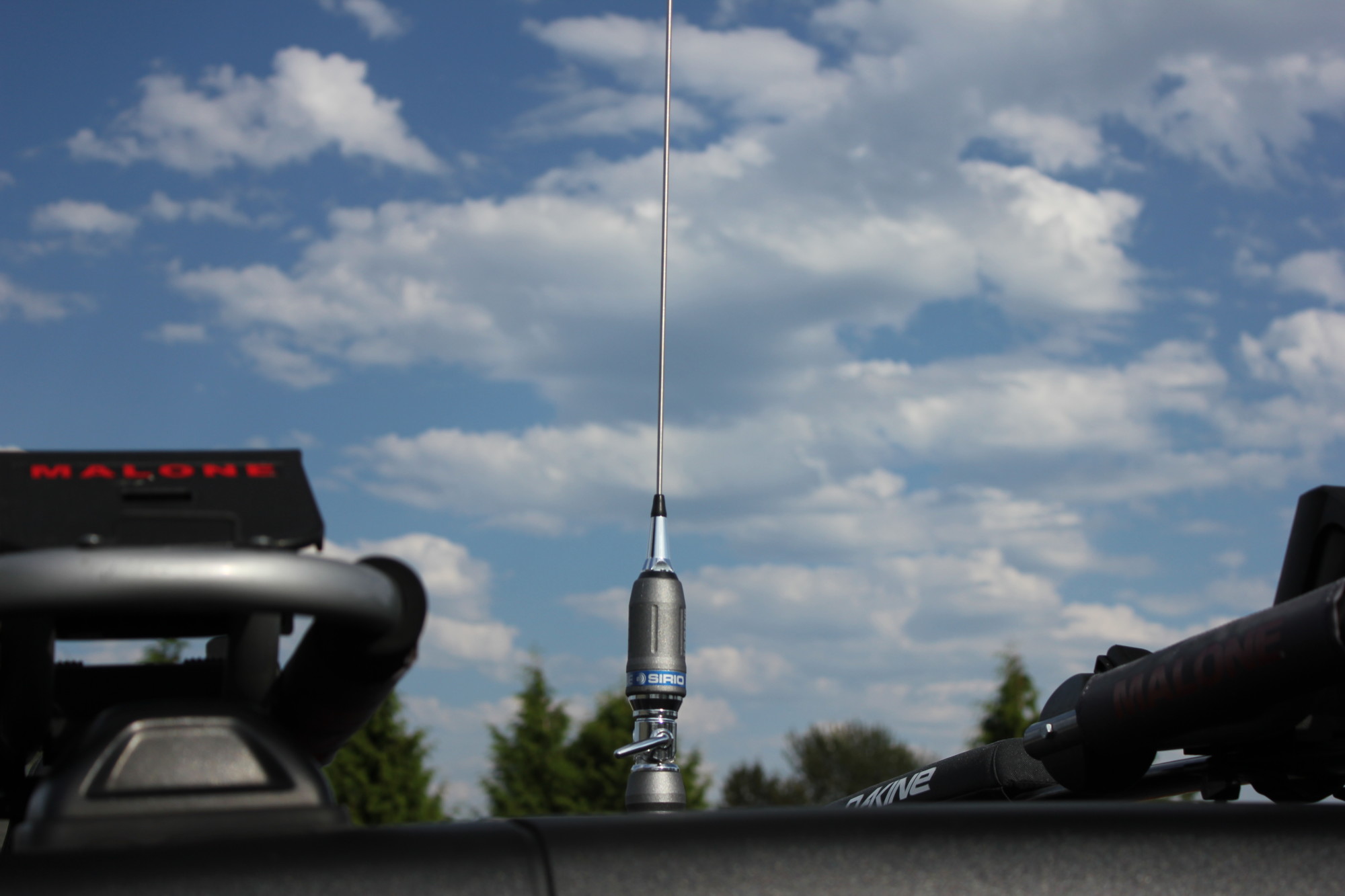