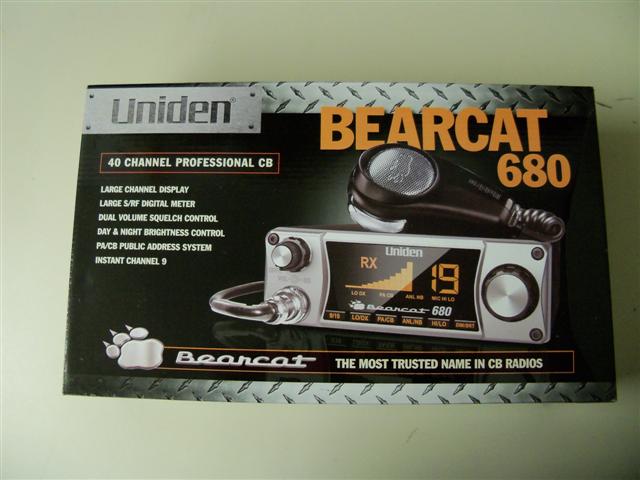 Small, Stylish, Streamlined. Those would be the three words I’d use to describe the new Uniden Bearcat 680. This new radio from Uniden bucks the old trends and tries to take their CB brand into the 21st century.  We’ve already reviewed the base model Pro 505XL and so we were excited to have a look at the next model up in the line.

The Uniden Bearcat 680 is a small radio. I think that its size stands out the most when you first see the radio. It’s almost shaped 6 x 6 (not including the knobs/antenna jack) and I easily was able to pick it up and palm it with one hand. This is a radio that you could mount in just about any vehicle on the market. In fact it’s one of those models that you could even easily mount with strong Velcro since the radio is also light weight. 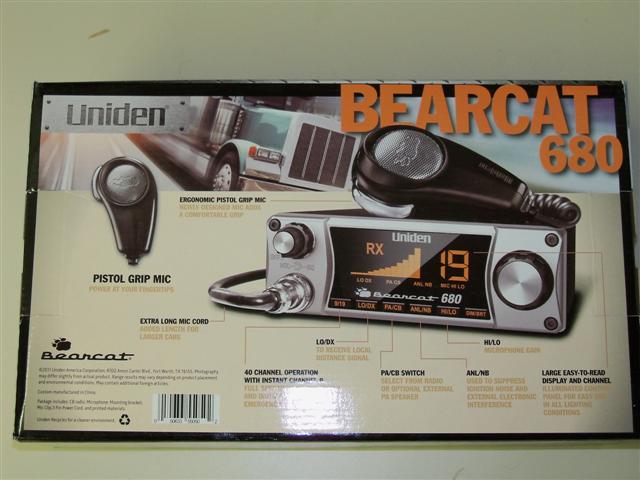 While the size surprised me out of the box, the styling is what will sway most people into buying this radio. It looks much more like a car stereo and the design fits with the interior of most modern vehicles.

The truth is that many CB brands continue to churn out radios that look like they belong in the old Dodge Dart I owned. For most people looking to get into the CB radio hobby they wouldn’t even consider putting one in their current model vehicle. Which leads me to discuss who this radio is targeting in the marketplace.

This new model is going after people looking for an entry level CB that has a couple of extra features but they aren’t looking for the full meal deal. Hardcore CB hobbyists might like this radio as a backup or travel radio but it’s really aimed more at the new CB’er who wants a radio for their newer car and likes the updated look of this radio. 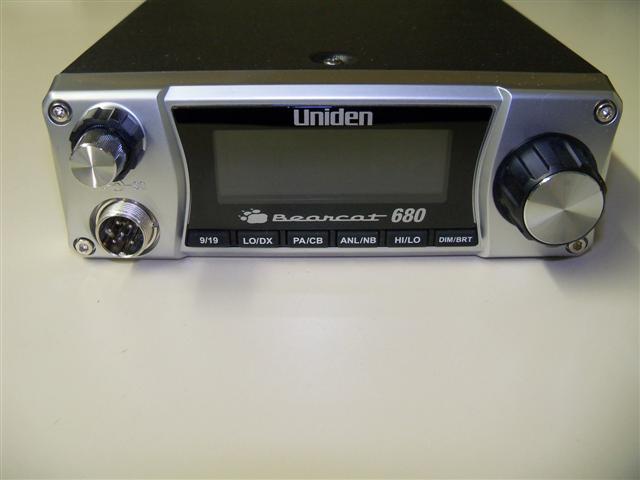 Out of the box you’ll see the radio doesn’t have the 4-5 knobs we’re used to seeing on most models. In fact it doesn’t even have 3 knobs it just has 2. One is the dual control pot for Volume/Squelch (Volume on the inside, squelch on the outside) and the other knob is the frequency selector. The volume control is also the on/off control. I’ll mention here (I also mentioned this in the video) that the channel selector has a very nice solid engagement and doesn’t skip or miss channels. A lot of the newer radios use channel selectors that don’t have a very good feel and they can skip or jump over channels when turned quickly so it’s nice to see Uniden found a way to solve this problem.

With going to just the two knobs they’ve really opened up more space for the new digital display. They’ve done away with the microphone gain knob and instead have utilized control push buttons along the bottom of the display. 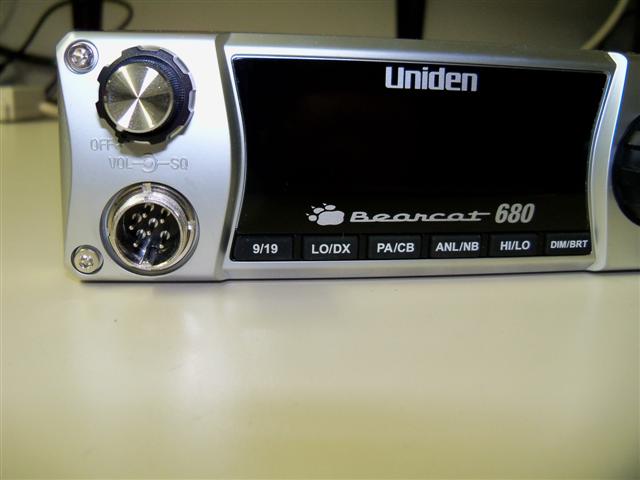 The push buttons are as follows –

9/19 – Instant channel 9 and channel 19. Pushing this takes you to channel 9, then push again for 19 and a third time takes you back to your starting channel.

LO/DX – Local and DX option, basically a RF Gain type control so that if you have strong signals you can cut back on them, or at the same time you can cut out far off DX (distant transmission) stations and only hear louder local stations.

PA/CB – The radio has a PA mode so you can use a public address speaker (FYI – talkback speakers and poor man’s talkback mod should work on this radio).

ANL/NB – This turns on the Automatic Noise Limiter and Noise Blank to cut out electrical noise and interference. Both ANL and NB are engaged at the same time with this button.

DIM/BRT – One stage dimmer to dim the display at night.

All of the above features (with the exception of the dim option) have a corresponding indicator on the digital display to let you know if they are enabled. 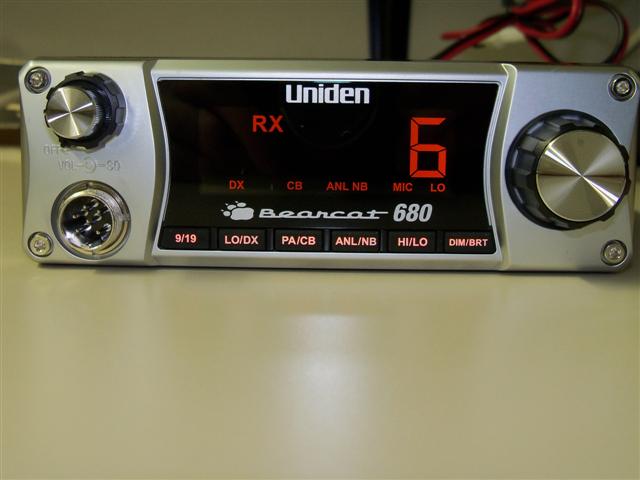 The display on this radio is a very pleasing color and is large and easy to read. The channel display is very large and I had no problem seeing it from anywhere in the vehicle. There is a RX and TX indicator which shows RX for receive and TX when transmitting.

The meter on this radio has 12 individual bars on it to show signal strength and output strength. In transmit mode it will basically peak the meter so not a whole lot of useful info there but in receive it’s very nice to see a digital meter that has more than 4 bars so you can get a better idea of signal strength coming in to your radio. The increments are individual and follow the S unit scale so definitely a nice meter to look at. 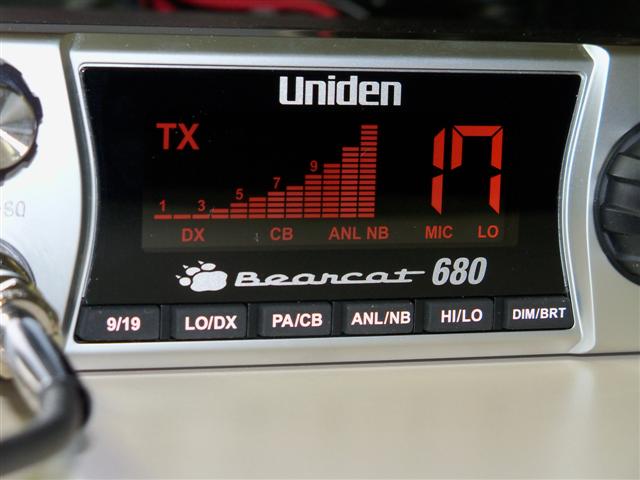 The microphone is a trigger style that they had used on the more recent 68/78 models and it fits in the hand well and has a nice finish. It provides good clean audio although it isn’t particularly loud on the other end. One thing that’s interesting is this radio uses a 6 pin microphone plug so if you plan to use a 4 pin microphone you’re going to need an adapter or do some rewiring. 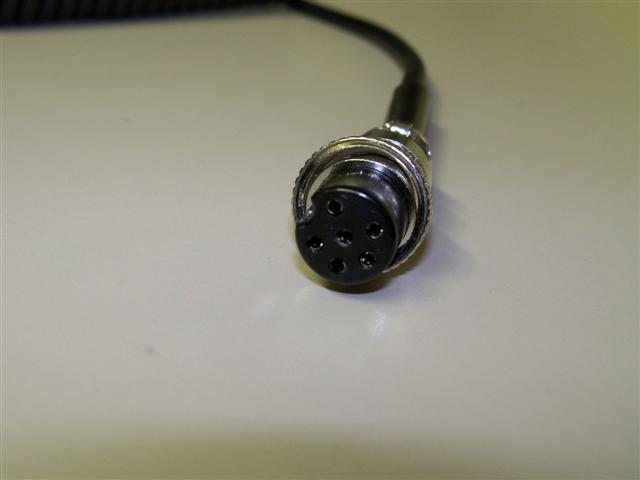 Inside the radio you’ll see surface mount technology which means very small tiny weenie parts. This is not a radio for people who like to perform modifications/resistor swaps etc. The surface mount technology means the radio can be much smaller, lighter, and hopefully more durable. The radio is a FCC approved CB so it uses a single final transistor and will key about 3 watts with swing to around 8-10 watts. 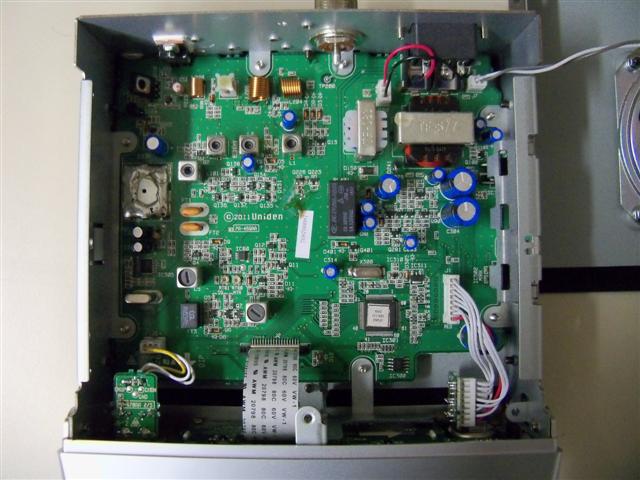 In looking inside the cover I do not see a modulation potentiometer for adjustment so unlike the Uniden 68 this is not a radio where you can just crank a pot for louder modulation.

At the back of the radio is the antenna jack along with the PA and EXT SP jacks and it uses a standard 3 pin power cord. 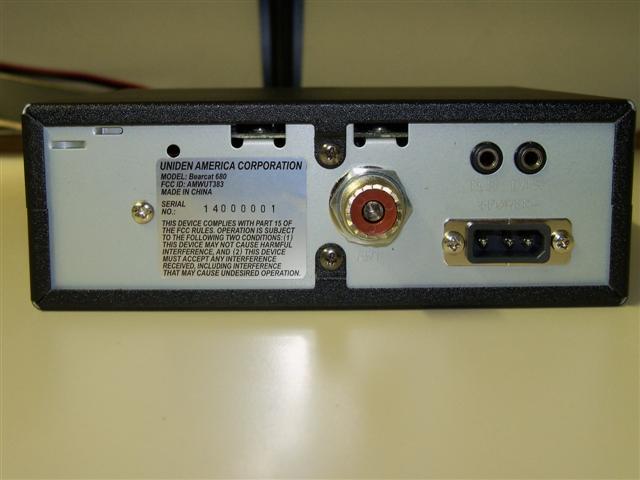 On the air reports were good and I was told I was easily understandable and my audio was clear but not particularly loud (comparative to a Uniden 68 with stock mic and modulation adjusted up). The radio was able to make a 10 mile contact through a Wilson 5000 on the roof to my home station although the signal at 10 miles wasn’t moving the needle.

To sum up this radio I’d say Uniden made something that the majority of the market will appreciate and it can be easily marketed and sold in stores like Wal-Mart, Bass Pro, Radio Shack, to foot traffic customers. The radio’s updated styling is going to appeal to a younger generation and to those looking for something that matches up with other types of current vehicle electronics.

The radio has a good receiver and is very easy to use. It’s a step up from the Pro 505XL and the display really sets the radio apart from previous “small” CB radios that were on the market. My only disappointment is that the radio isn’t really a replacement for the beloved Uniden 68 as that radio could be easily adjusted/modified for loud AM audio and was a popular model for some of the more serious AM CB radio crowd. I’m hoping the new 880 will fall more along those lines as the 680 definitely is targeting the entry level CB’er.

The Uniden Bearcat 680’s styling, size, and price point should appeal to the masses and hopefully that will bring some new blood into the CB radio hobby. 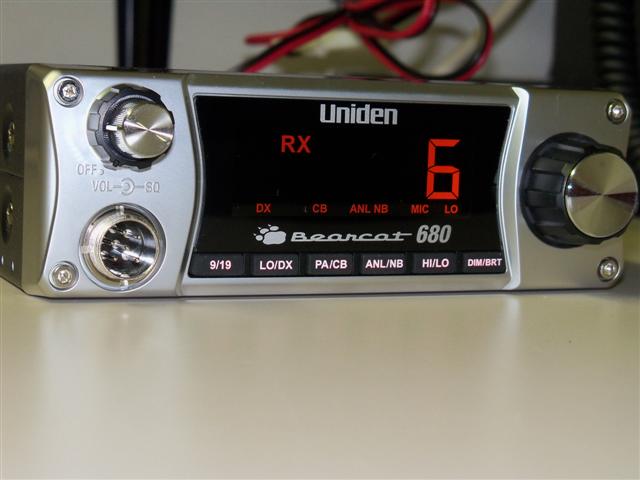 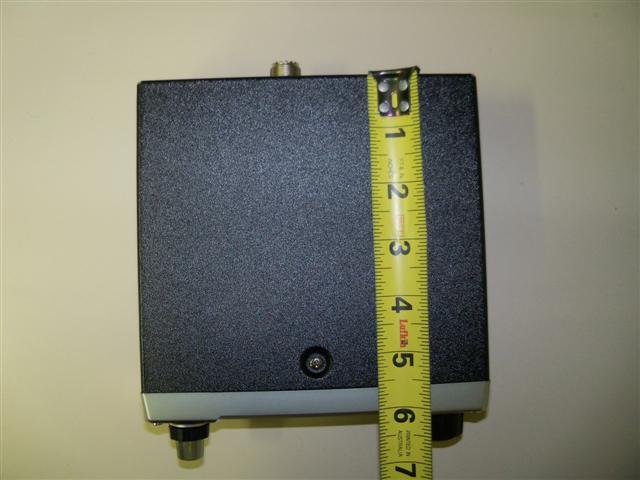 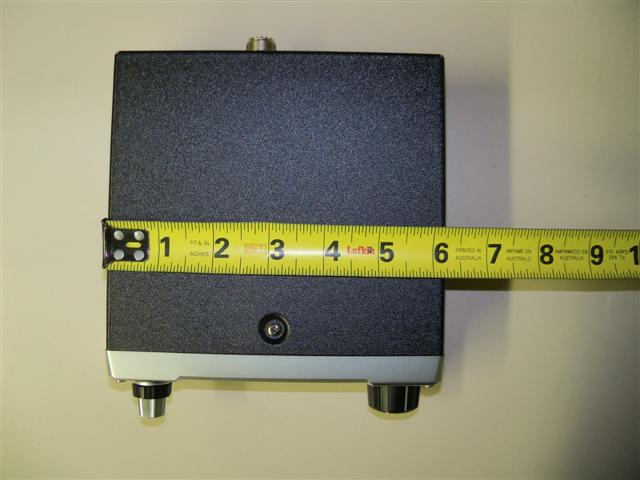 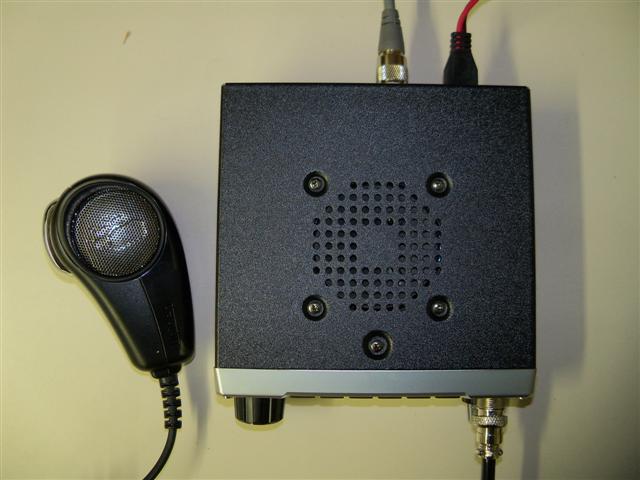 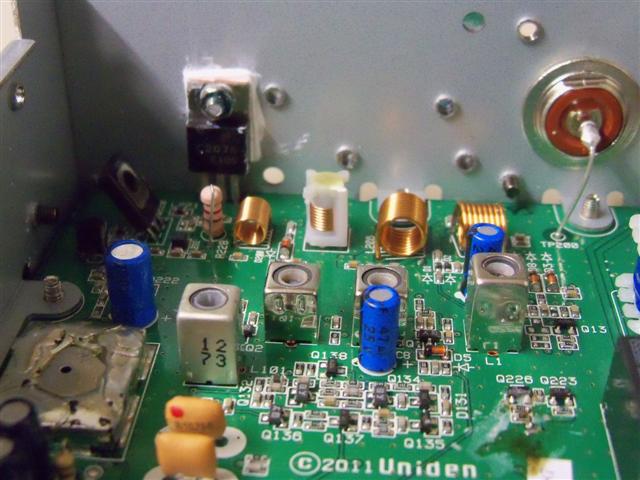 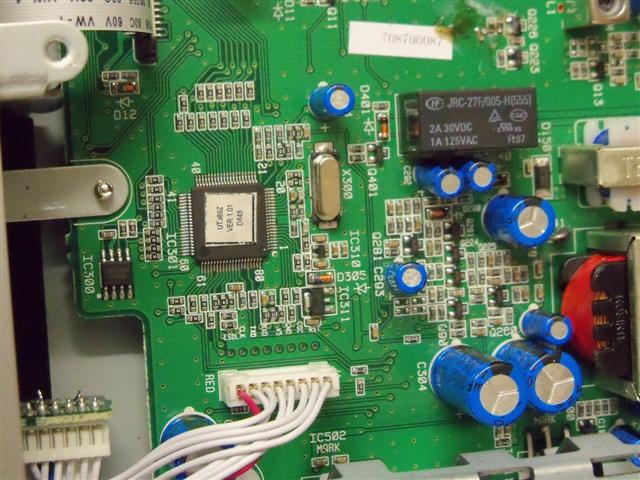 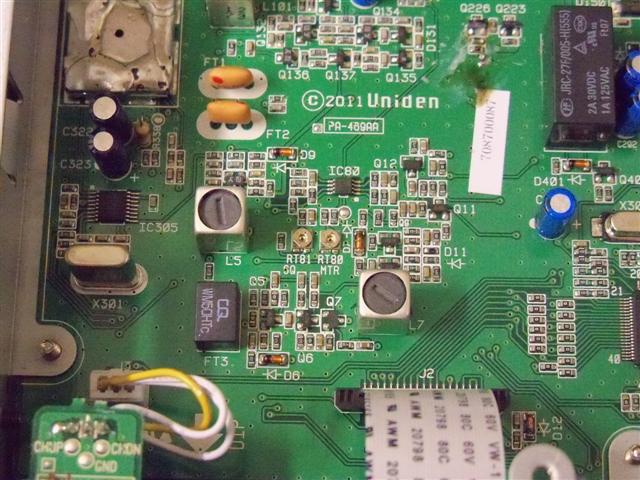