When you look at the Uniden Pro 640e the first thing you’ll notice I’m sure is the styling. The 640e is an all black radio. Black face, black buttons, black covers; in fact, the only part of the radio that isn’t black is the back of the radio where the antenna plugs in. As cars in the 80’s and 90’s used more plastic in the interior and less chrome, many people wanted a radio that would be more suited to that design. Because of its small size (8.25in x 6.75in), simple controls, and modern styling this radio was a great choice.

It might surprise some of the more hard core radio operators but many people in our hobby are concerned about the aesthetics of a radio as well as performance when mounting it in their vehicle. In fact many of the radios on the market today are bulky and often very gaudy. Shiny chrome here, oversized knobs there, it’s no wonder that many people getting into the hobby say “I’m not putting that 70’s looking thing in my car!”.

This is especially true when we talk about the large SSB radios such as the Cobra 148 GTL or Uniden Grant and that’s where the (now discontinued) Uniden Pro 640e hit its target audience.

Designed using the same guts as the Uniden PC122XL, the 640e really wasn’t anything new in terms of board design or performance. The 122XL had proven itself as a very capable sideband radio along with being the smallest mass produced sideband radio at the time. What Uniden decided to do was modernize the look and the result was the 640e.

The radio has the basic features with the exception of an RF gain knob. Instead it has a RF Gain Attenuator button which when depressed offers a set amount of reduction in gain (basically like turning the RF gain knob to the halfway position rather than having it wide open). To me this is a nice feature since I rarely use the RF gain knob on any of my radios.

This radio also incorporates an SWR button rather than the SWR switch and calibration knob you see on many other radios. The SWR feature on this radio is auto calibrating which is something you didn’t see on too many radios made at the same time as this one, although it’s being utilized on more radios in the current market. While never as accurate as an external meter, I found it provided a good enough general reading.

The ANL/NB on this radio works well and I also like the Hi Cut button which cuts out higher frequency noise – useful especially when you have a lot of static or hiss in the background.

CH 9 and CH19 buttons were probably useful in the 80’s and early 90’s as there isn’t much monitoring on channel 9 anymore and many drivers no longer run channel 19. On the plus side Channel 19 is still used as a local channel in many areas. 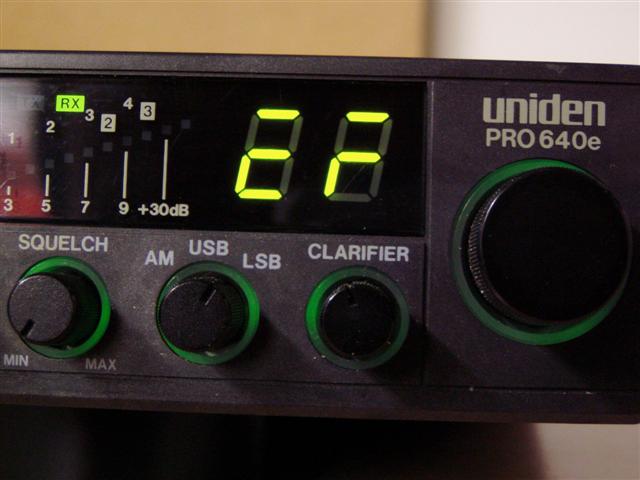 The clarifier on this radio has a good feel to it and moves very smoothly. That has been one of my complaints with some of the export radios I’ve used recently – I know that on the some radios the clarifier tends to have a centering position which always seems to annoy me. The clarifier on those radios will often slip or move and fine tuning is possible but takes a bit of work. The 640e is a joy to operate when clarifying in stations.

Now let’s talk about the display – probably the single biggest reason not to buy one of these radios. The Uniden Pro 640e suffered from a major design flaw in the circuit that regulates the voltages to the channel LED segments and they are prone to burning out. When I say “prone” I should say that if you own one of these radios, eventually the LED’s will burn out. Replacing them in this radio is much more difficult than many other CB’s on the market, and although possible, it’s a pain. 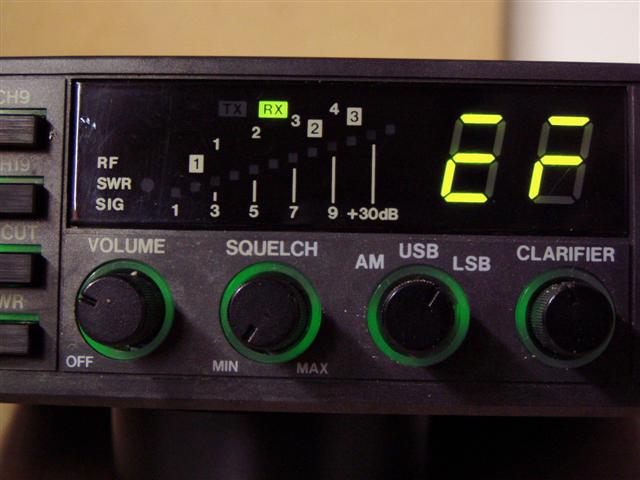 As you can see in the pictures of this radio the LED’s have burned out in multiple locations and although I can still tell what channel I’m on, if another 1 or 2 burn out it could get pretty interesting. Of course you can easily solve this by hardwiring in a frequency counter or using an external frequency counter.

The LED meter isn’t going to offer the in-between accuracy of a standard mechanical meter, but since mechanical meters aren’t really that accurate either I have never had an issue with the LED meters. I find these ones in particular are nice to look at with the graduated colors going from Green to Amber to Red depending on the signal strength on RX or the output during TX. 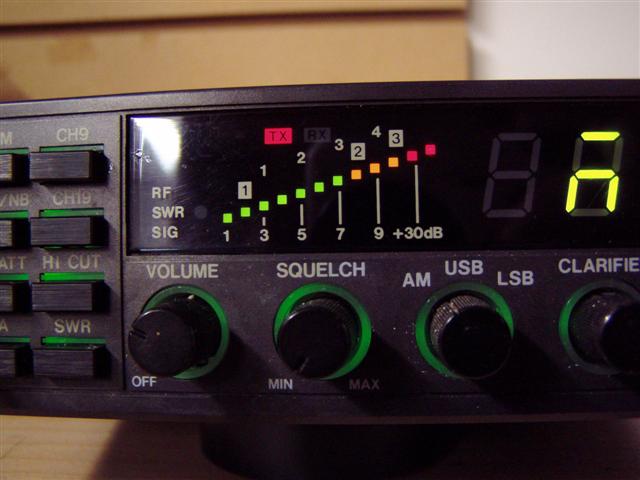 The receive on these radios is very good on AM and SSB and signals are easily picked up. Sensitivity is good even though there may be newer models that offer higher levels. I find these radios tend to have less background hiss and static compared to many of the newer export radios, which make them nicer to listen to for long periods of time. During DX these radios can hold their own and I had no problem picking out far-off stations even when conditions started to quiet down.

The lack of RF gain control means that if you are running really close to another rig and want to dampen that signal you’ll need to use the attenuator button. While this system does work it doesn’t give you any varying level of control. I know many operators do like to turn back the RF gain just a little bit during normal operating to quiet down the background hash and the lack of RF gain knob might be annoying to those operators.

While driving around town the receiver picked up the usual electrical interference and spikes that are common these days and seemed to be on par with other exports and CB’s I’ve tested in terms of the noise level.

The 640e isn’t designed to do any major wattage – it’s a small single final CB radio and on AM and SSB you might see a solid 12-15 watts PEP. You can push the radios for more watts but much like the PC122XL they can be prone to problems with overheating when driving to the max so I don’t recommend trying to squeeze watts out of these radios. When cranking the ALC you might end up with distortion as well, so if you need more juice the answer as usual is to add a kicker.

Modulation with a stock mike is adequate but not too impressive. Adjusting the modulation inside the radio and adding a power microphone are a must if you want this radio to sound like a bigger radio. A power microphone also will help keep your average levels on sideband a little higher. This radio is never going to have screaming loud audio but on SSB they can offer nice clear audio which many operators on the other end will appreciate.

When I tried to make my usual contact to my test station 45 miles away I found that while my dual final export was putting an S5 on him, the 640e was only managing 1-2S units which wasn’t a huge surprise seeing as it was peaking at less than half the wattage of the export radio. With a power mike though audio was solid and I was able to carry on a conversation without difficulty.

Simple and small radios are common on the AM side, but when we talk about small SSB radios there are limited choices these days. The Magnum 257 definitely comes to mind, but it’s also an export radio. In the CB market the Midland 79-290 was smaller and the 979 also is fairly compact, but neither of them are as small or styled in the same way as the 640e. While the radio definitely has some faults in design (the LED burn outs being the main issue) you’ll be hard pressed to find a small SSB radio with modern styling that can offer the performance that people loved in the 122XL’s. A 640e with a power mike and paired with a small 2 pill amplifier makes for a very capable DXing combo. A mild tune is all that’s needed to get the radio up around 12-15 watts and that’s really as much as you’ll want to push the radio.

For those looking for more modern factory-installed features such as a frequency counter, talkback or variable power the simplicity of the 640e probably won’t appeal. But for those operators with a picky spouse or a newer car who don’t want a shiny chrome face reflecting sunlight in their eyes, a used 640e might be treasured find (at least up until the LED’s burn out). 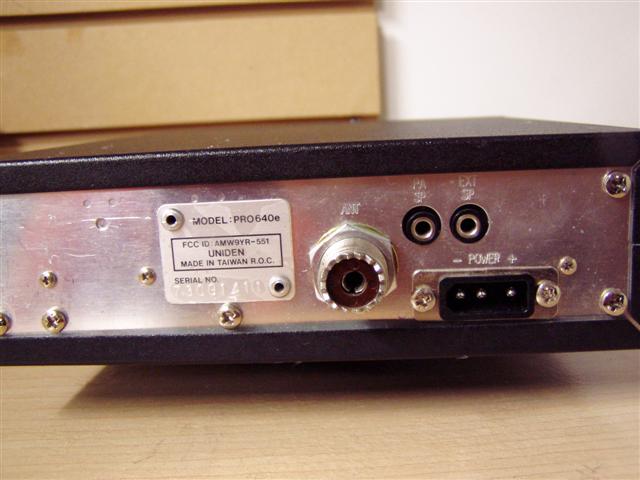 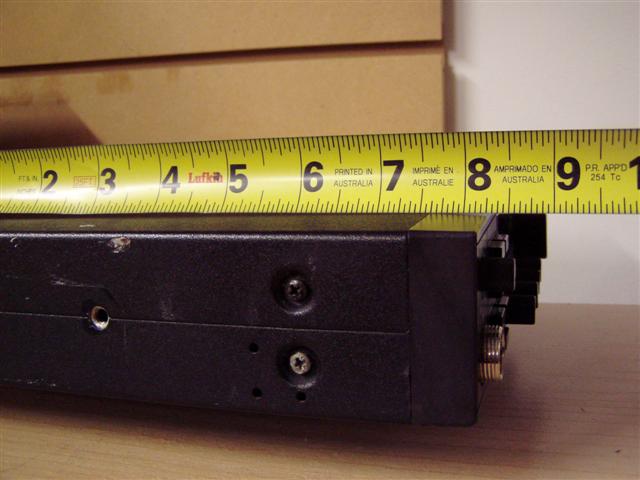 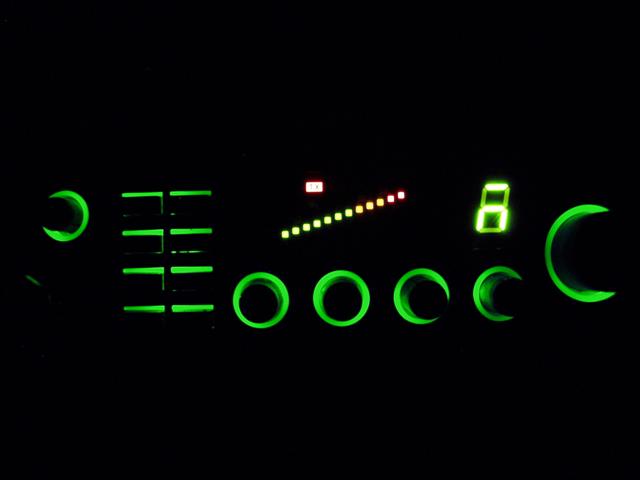 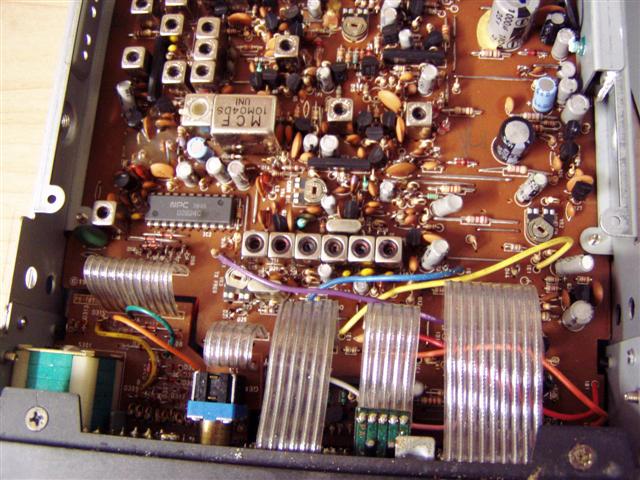 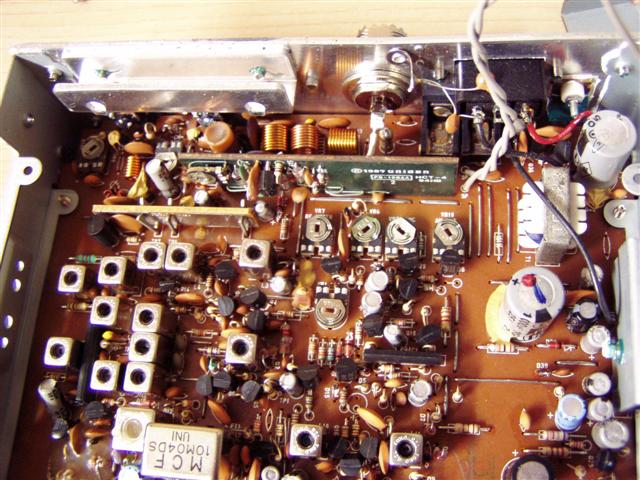