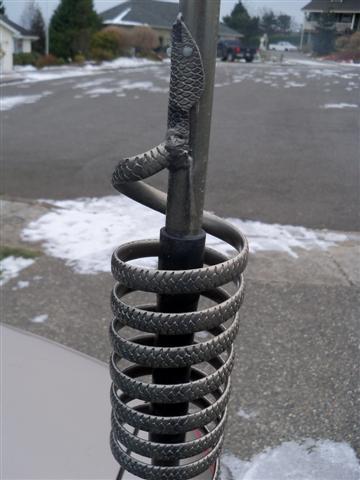 What is different about a coil antenna compared to a normal antenna? Well for starters most coil antennas are able to handle larger amounts of wattage. For example – a base load antenna such as the K40 trunk mount which has been popular for many years is labeled by the factory as able to handle 500 watts peak. Coil antennas such as the Viper (25,000 watts), Predator 10K (25,000 watts ), or Monkey Made (30,000 watts) are designed to handle much higher power levels. For the antennas to handle those higher power levels they are built with thicker and with stronger materials than most other antennas.

Performance with large coil antennas can be better than many more traditional whip or small coil antennas but there is still much debate on whether a shorter coil antenna can outperform a longer steel whip antenna.

The Viper coil antenna is made by Workman, which is one of those companies that has some hit or miss products. It’s an aluminum antenna which is roughly 70″ in length overall. It’s designed to work from 26 – 30 MHz and has a manufacturer rating of 25,000 watts (although I doubt it’s designed to handle that wattage for any amount of time). 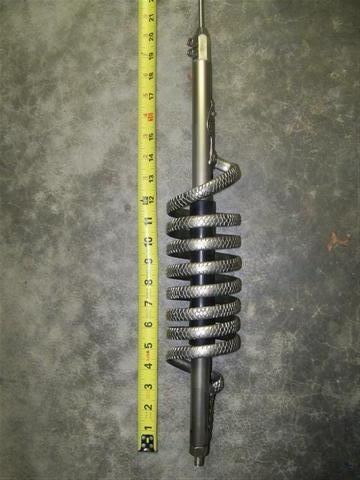 When we received the antenna it arrived in a plastic bag with a page of instructions. The antenna comes in two pieces, the base and the steel whip. The base has a standard 3/8″ threaded bottom and then has a coil attached that is molded to look like a snake (see picture) with two glow-in-the-dark eyes. At the top of the base section of the antenna is where you insert the steel whip and there are two substantial alan screws that tighten down to hold the whip in place.

To begin the install we screwed the base section onto the mount and then slid the whip down into the base just far enough so that both screws would be able to screw down against the whip. I hooked up my MFJ-259B antenna analzyer (a must have accessory for those who get serious in the hobby) and began tuning the antenna.

The tuning process was very easy and I barely had to move the antenna to achieve a 1.1 SWR on 27.385 (my most used frequency). I then tested out the antenna to see how broad banded it is and found that the SWR remained under 2.0 down to 26.595 MHz and up to 28.400 MHz. Those readings are pretty good compared to other antennas I’ve tried over the years.

I then drove 20 miles away from the base station and proceeded to perform a test to compare a couple of common antennas I had available. Keep in mind that comparing antennas can be like comparing beers – unless one is really bad sometimes it’s tough to really tell which one is better. Every setup is different, different antennas work better on different cars, and there are about another 100 variables to keep in mind.

So what does the test prove? Well, not a whole lot 🙂 The results aren’t scientific but they are pretty much as I would have expected them to be. The base load whip coil antennas such as the Wilson 1000 and RS 21-988 outperformed the fiberglass antenna. The larger air coil antenna and 102″ SS whip outperformed the smaller Wilson and RS.

What I did take away from the testing was that the Viper antenna held its own fairly well in this type of local test. For further testing I left the antenna on the vehicle for the next 6 months ands used it for my daily talking and DX.

After six months I can report the following –

The black finish on the antenna is poorly applied. After two months the black wore away and left a metal colored antenna except for one small area near the top of the snake that remained slightly black. The actual metal finish was more appealing to me than the black paint so no harm done there. The “glow in the dark eyes” don’t really glow in the dark and never did (at least not well). That didn’t really bother me as the whole snake thing is a pretty silly gimmick for the most part although I’m sure there are certain people out there that will think it’s cool. 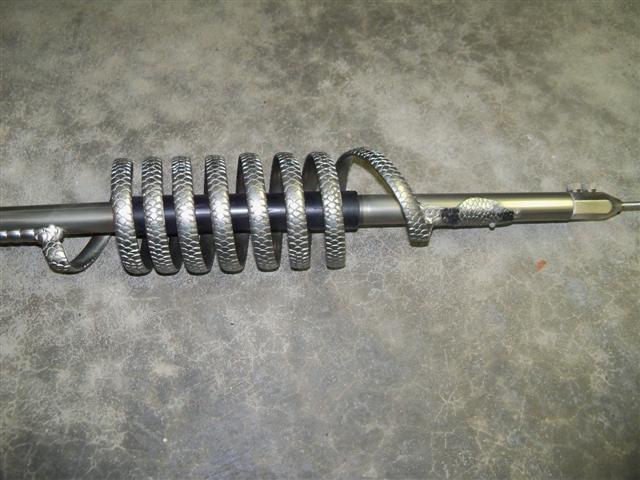 The antenna otherwise is still in good condition with no rust, corrosion or other defects.

Now the performance I’ve had over the last six months has been very good. Locally I can talk to my good friend 35 miles south of my daily without any problems. I can talk to other locals easily and the receive seems almost as good as a 102″ whip.

DX performance has been excellent and I’ve been able to work just about any station I can hear which is what you like to see in antenna performance.

The Workman Viper seems to be fairly well made in its welds and construction but is poorly finished with its paint. The antenna doesn’t have the same quality or finish as other large coil antennas but the antenna still works properly. It tunes easily and is fairly broad banded.

At around $55-$59 on most sites it’s slightly cheaper than the Monkey Made or Predator 10 K antennas and that’s where the key point of this review will be made.

A Monkey Made antenna will retail for around $65-$75 and a Predator 10K can be purchased for around $65 (cheaper if you buy direct from Predator). Both of these antennas are far superior in construction, finish, and performance to the Viper. So the tough questions is – why would you buy the Viper when you can spend $10-15 more for a better antenna?

The answer – Because you want an antenna with a snake on it.

Really, that’s the only reason I can see buying the Viper rather than the better MM or 10K antennas.

The Viper isn’t a bad antenna at all, it tuned well and it performed well, but when there are better choices out there for only a few dollars more I would tell most people to give this antenna a pass and buy a MM or 10K. Unless of course you really are into snakes and if that’s the case you will think this antenna is the coolest thing you’ve ever seen. 🙂