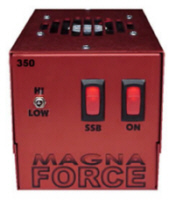 The Magnaforce 350 I bought and tested was already a couple of years old when it came into my hands, but the way that these amplifiers are built, it still looked and worked like new.

The first thing that really caught my eye with the Magnaforce line of amplifiers was the built in fan system that turns on whenever the amplifier is on to keep it nice and cool. I love this feature and it’s something that immediately sets it apart from any of the cheaper amplifiers such as the Palomar or RM line. Heat is a big killer in amplifiers and when you pay more money for higher quality you should expect a cooling system.

The second thing I noticed with these amplifiers is their solid construction. They have a very simple yet sturdy case and the switches are high quality and very durable. Did I mention the switches light up? Another simple touch that really makes it nice to use at night.

Also on the back you’ll find an input for a remote switch control. This is a nice feature if you intend to mount the amplifier in a difficult to reach location. Xforce sells a remote to use with this amplifier.

Inside the amplifier you’ll find a pair of 2SC2879 transistors that can give you output as high as 400 watts as listed on the Xforce website.

In reality most people will see output between 250-325 watts. I’m sure the higher output values are possible but you’d be pushing the amp to it’s limits and nobody drives their car at 100MPH all the time 🙂

With these numbers you’ll need to make sure your setup can handle the amperage draw – 29 amps maximum. A low SWR and proper antenna system is also necessary when running this type of amplifier.

This amplifier is excellent for talking DX both on AM and SSB. The power output is more than enough to make sure you get heard in DXland whether you are talking on channel 6 or channel 38 LSB.

A lot of people who talk on SSB might be concerned by the amps B biasing, but have no fear – in my experiences with this amp I was told by numerous people that on SSB the resulting signal was very clear with no distortion.

At a retail price of $209.99 it perhaps is one of the best deals in the industry. Although you can buy cheaper amplifiers that can deliver the same output numbers I doubt that any would compare to the quality of this amplifier. These amplifier are well built and if run properly should offer years of care free use.

This product gets my approval 100%.

Please note: This amplifier is illegal for use on the 11 meter CB band – and we do not condone or endorse the use of amplifiers on the CB band.