Now this isn’t an easy topic. Many people out there may think that they have a loud AM radio. But on the air everyone knows when someone with an audio monster keys up. There is no denying a loud radio.

So I did a little poll on my favorite CB forum and the following is a list of the top 10 audio monsters that were mentioned. Now don’t get upset if your radio isn’t listed, there are plenty of other radios out there that can be loud, but this list comprised the radios where there was no argument, no discussion, everyone agreed that the following 10 are just PLAIN AM AUDIO MONSTERS!

First on our list is the Magnum S9, an amazing mobile radio from RF Limited. This radio was just introduced a few years ago and already it is an all time favorite. The radio features the well known “Top Gun Modulator” control which allows this radio to key as low as 1 watt and swing to 40 watts with very loud audio. I owned the Omegaforce from Magnum and have experienced the power of the Top Gun Modulator system first hand. Magnum radios have produced one of the most pleasing sounding loud and clear radios available, not to mention that it comes stock with dual control echo, SSB and FM, roger beep, frequency counter and more.

I’ve talked to multiple people who run the S9 and can say without a doubt that on AM (and SSB as well) this radio has some crazy loud audio and so it easily made our list.

No doubt you’ve heard or seen a a few Galaxy radios in your time. They have been around for a good amount of time and have found a strong following of CBer’s who like their styling and function. When it comes to their audio they also deliver.

The two models that we will mention are the Galaxy 55 and the Galaxy 99. Similar in design and function both radios can scream on AM. Many of the people you will hear in DX land are talking on 55’s in the mobile. I know of at least 5 locals personally who swear by the 99 as the perfect radio for squashing locals. These radios need a good tune to really get the monster quality audio, but once it’s there no one can deny that they can get down and dirty. Pretty much any of the upper level Galaxy Export radios could have made the list, but these two are known for doing it best.

Many people prefer the tried and true radios of old, but if you had that kind of attitude you’d never get to try the loud and proud audio of the Stryker 440HP. Featured in one of our radio reviews this month the Stryker 440HP is a newcomer to the export market, but it didn’t take long for this radio to impress.

Already people are snatching these off the shelves and commenting on how loud these radios can be. The Stryker 440 was designed by industry experts and they took into account the features that people really wanted in a radio. Their finally product is a very pretty radio with some serious ass kicking AM audio. We’ve heard rumors of other Stryker radios in the works and can’t wait to see what’s next.

In the 1980’s the CB craze was hitting its peak and Cobra radios was king of the market. Their base stations and mobiles are among the most popular and most widely used. There is no denying that they have produced some of the best radios around. When it comes to AM audio though there is a favorite of the loud crowd. The made in the Phillipines Cobra 29 line has been called one of the all time best.

No one yet has truly defined why the ones made in the Phillipines were better, but the general consensus is that they were of a better quality and when tuned up were louder than the rest. Anyone who loves that old school loud audio has owned one of these babies. Die hard radios that take a licking and keep on ticking. I myself had one of the ugliest looking Cobra 29 GTL’s you’ve ever seen. The insides had been chopped and cropped to the point where I couldn’t tell what had been done to it. One of the loudest radios I’ve ever owned and that’s why they make the list. 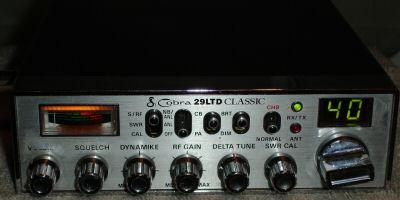 A big favorite with the truckers as well as us hobbyist is the General Lee dual final export. This radio has that old school styling with the new school power and audio. After a good tune these radios can do 40+ watts with loud loud audio. The radio has a very nice sounding echo with dual controls. I’ve never owned a General Lee personally and that’s something I hope to change. This is one of those radios where everyone agrees that it’s loud. Anytime I’ve heard one it was loud. Go ahead and ask someone and they’ll tell you the same thing. One loud radio.

Very similar to the General Lee is the Connex 3300HP. If you take a quick look it’s easy to see the similar styling and function and the similarity doesn’t end there. Just like the General Lee this is the radio that people talk about when you hear the name Connex. It’s a tried and true radio and everyone knows it can do the AM squash. Connex has recently produced high power versions of their radios with one that will do over 200 watts out of the box. Reports so far say that these new high power versions also have that loud Connex audio. Uh oh…better hope your locals don’t get a hold of one of those 🙂

If you haven’t heard of a Tram radio, don’t worry you’re not alone. They haven’t been produced in quite a while and there aren’t too many in nice condition floating around anymore. Many people have never even seen one, but I bet they’ve heard one. These babies have a sound all to themselves. Original advertisements for the Tram D201 tout the high level plate/screen modulation of it’s Class C final amplifier tube and the fact that it can deliver heavy modulation without splatter. These radios are a classic and if you find one in nice condition for sale more than likely you are going to pay a pretty penny for it. There are collectors out there that hang on to these things like the family jewels. The best most of us will ever do is to enjoy the great sound they produce on the air. 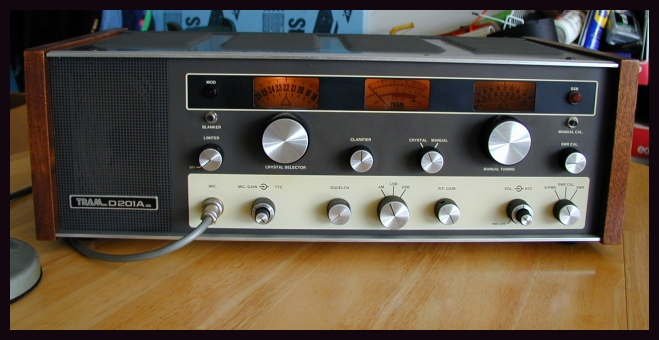 I had heard a lot of talk about the old Johnson line of radios and I had even owned one of their mobile radios at one time, but I never had heard one on the air or understood why they were so sought after.

Then one day many years ago I heard a Johnson on the air for the first time. It was awesome.

This guy sounded like he was on a professional AM radio station broadcast. His voice was loud and clear and had a deep resonating sound that just boomed out of my speaker. Since that day I’ve heard many more and I’ve yet to hear one that didn’t sound great. Like the Trams these radios have their own following and collectors who love them. If you ever hear a Johnson on the air you will know it and never forget the way it sounds, nothing else like it.

The Yaesu FT-101 and FT-102 are two very popular transceivers with the CB radio crowd because of their high quality and multiple functions. But multiple people have made reference to their AM audio loudness and quality.

Before anyone starts yelling at me I’ll point out that NO these are not CB radios. These are ham radio transceivers and have to be modified to be used on 11 meters. But they made our list because of the high number in use by CBer’s. This radio has really become a favorite of both Ham radio and CB operators. They are heavy duty radios with all metal construction and tube finals.

In addition to having great AM audio they also have SSB and put out 100 watts. If you want to buy one of these beautiful radios you better be ready to shell out at least $250-350 and beware – these are tube radios and you may have to find and replace the tubes to enjoy the full output of the radio. But that may be a small price to pay for one of the all time favorites. 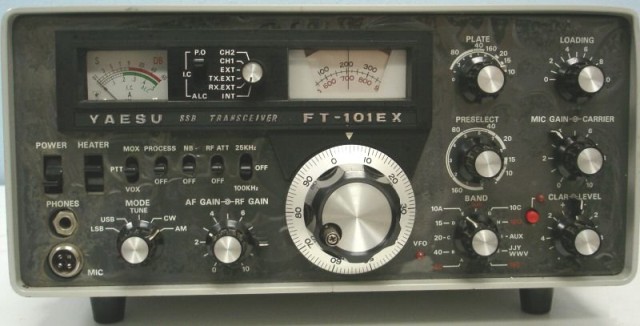 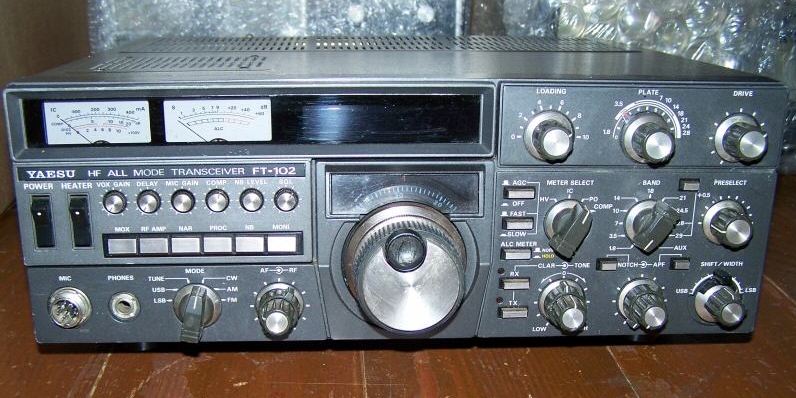 One of my favorite older radios is the Golden Eagle Mark III. This radio exemplifies nostalgia. It’s a two piece unit with a receiver and a transmitter making it pretty bulky to have on your desk, but it’s just a cool looking radio.

Now the Golden Eagle like the Johnson and Tram has its very own sound which has a great tone quality to it. These radios also came with a mike that produced a distinct “ping” when you would key up the radio.

You can tell these radios have great audio when listening but it’s even more apparent in their daily performance. They don’t put out a whole lot of wattage but I’ve often heard the audio of a Golden Eagle blank out a more powerful radio. That’s when you can tell you have a audio monster. These babies are getting hard to find in nice condition and so the price of one is getting higher and higher. Have a look at ebay and you’ll see mint ones sell for $400. Owners of these are proud of their radios and are very unlikely to part with them. 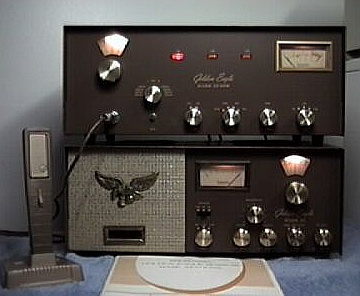 So maybe at the end of the day having a loud AM radio isn’t everything. But there is something to be said for having a radio that people will remember. There are some big strapping CBer’s out there with radios that have loud audio so distinct that 100’s of people across the country can tell who is keying up the second they begin talking. Now that’s impressive.

The nice thing about most of the radios listed here is that if tuned correctly they can provide loud audio without being distorted. Radios like the Tram and Johnsons can give you a broadcast sound that cuts through the airwaves with only 4 watts.