CB Radios: How many is too many?

Maybe it’s our hunter-gather instinct, but when it comes to collecting radio equipment many of us in the hobby have a bit of an addiction. We like to hunt for deals on radios, and then gather all of them. The end result is often a radio room with overflowing boxes full of old radios we don’t need and a wife that asks when we intend to clean up the mess. 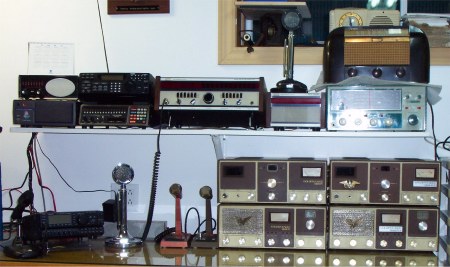 Now we all know that there isn’t a magic number for how many radios someone should own, and of course everyone is different and has different storage and room available, but there are definitely some easy signs to look for that indicate you’ve got too many radios.

The first thing I look for when trying to decide if I have too many radios is my storage ability. I have shelving to hold 10-15 radios and a couple of plastic bins I use to store old coax and knick knacks. When I end up with 30-40 radios I tend to start getting overflow onto my shack table and onto the floor. Radios start getting stacked on top of each other and I find that if I want to use the bottom radio I have to first pick up and move the top two before accessing the bottom one and then restacking the radios again.

Folks, if you get to this point, it’s no longer a radio collection, its clutter.

Having radios stacked to the ceiling in random Jinga arrangements starts making your shack look like the back room of the local CB shop. Now if this is the way you like it, that’s fine, but if you’re trying to decide if you have too many radios than this is a key indicator.

The second thing I take into consideration is how many of the radios do I use or potentially have a use for. I personally always keep 2-3 small CB’s and mag mounts for road trips for my friend’s cars. They take up a bit of room, but I have a use for them. On the other hand I have a collection of old 23 channel base stations sitting on the floor of the garage. I will not be using any of these radios, do not have any future use for them, and the models I have are unlikely to become desirable antiques which I could sell for profit.

Yes, it’s time for these to be sold at the next garage sale. 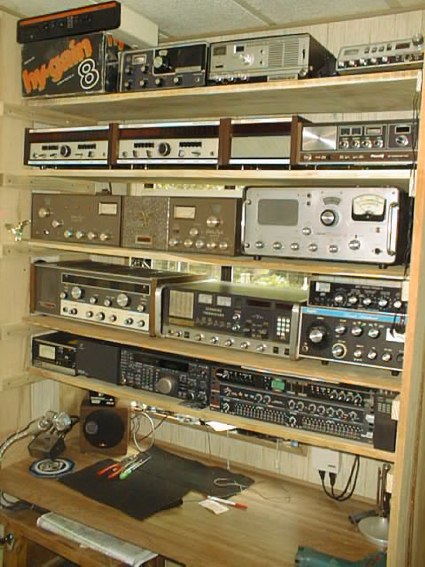 I do switch my radios around on a regular basis though and I have some SSB and AM radios that I have stored that do get pulled out once or twice a year for fun. Some of the AM radios have screaming audio and if the superbowl is running I may hook them up to do some big talking, but the majority of the time I prefer not to go for that sound and so they sit patiently on the shelf awaiting those days.

I also have a couple of classic radios in boxes on the shelf that don’t see any use. These are the equivalent of the action figure nerds who buy the new Spiderman collectable toy and leave it in the package for 20 years. These radios have already become classics and are hard to find in mint condition or in original boxes and so hanging on to them can be considered an investment or just the preservation of our hobby; however you choose to look at it. Hanging on to these radios isn’t clutter to me even though they don’t get any use.

The last thing I look at in terms of deciding if I have too many radios is cosmetics. I’m fairly tidy and my wife is a clean freak. To me, having a radio desk and shop that is clean, organized, and pleasing to look at is important. I have all of my parts in organizers with labeled drawers for the different bits and pieces.

I like to be able to solder and work on radios without having to push other stuff out of the way, or having to worry about my soldering iron rolling over into a plastic speaker or another radio if I set it down.

Although having a clean station doesn’t allow you to make any more contacts, it does give you a place that allows you to easily access each radio and microphone, coax, amplifier and any other radio equipment you intend to use.

I can still recall a day many years ago where I asked my wife to give me a shout on the base radio in the afternoon while I was out driving in the mobile.

I never heard from her and when I got home I asked “Why didn’t you give me a yell on the radio?”

To which she replied – “Honey, they are 10 radios sitting on that desk with 10 microphones, and 10 power buttons, and 10 different types of channel changing knobs.”

That was really a wakeup call to me, especially since so many of the radios really overlapped in function. And so I began the great sell off on eBay and Craigslist where I sold and shipped radios daily for a couple of weeks. In the end I had raised over a $1000 which I decided would be spent on non-radio related gear.

Everyone has a different idea of what their shack should look like and some people like to surround themselves with every radio every made. Maybe it’s a bragging rights type of thing; maybe it actually is a radio addiction. But there definitely is a point at which I think you have to step back and say “Wow, I have too many radios.” 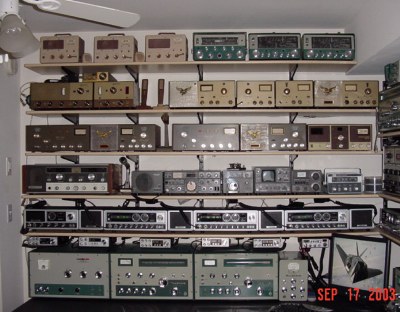 I know a local who passed away and at his estate sale there were literally 100’s of radios for sale from his 30 year collection. While the sale of the radios and rare finds was great for the rest of us, I realized that the end result of collecting 300 radios……is 300 radios. If I was guaranteed a radio room in heaven maybe I’d try to take them with me, but for now I’ve been able to whittle my collection down to 10-15 of my favorites and I think that’s a good thing for me, my wife, and my shack.