The Cobra 148F GTL is unique because it came stock with a built in frequency counter.

It basically is a Cobra 148 with the Frequency Counter and some push buttons instead of the standard switches.

The frequency counter is only a 5 digit counter.

Many people do the extra channel controls using the NB and ANL buttons, pushing one of the other or using a combo of them in their on/off positions can control the channels, this is a nice way to wire the extra channels if you aren’t going to need the NB or ANL features in your setup.

The radio I had also had talkback installed, someone just installed the resistor across the PA/Ext sp jack – it sounded pretty good.

The Cobra 148 F tunes up very well and has loud audio, my radio swung to 22 watts on AM with crazy loud audio on the stock cobra coffin style microphone. SSB was equally as impressive. The one I bought had been peaked for maximum power and modulation. The Clarifier was also unlocked on my radio.

The bad part was that because the radio was pushing so many watts it would get hot very easily. The back of the radio got very hot with only 30 mins of use. Probably not a good thing for long term use as the heat will eventually cause the radio undue wear on other parts. Although, the radio was a good 10 years old when I bought it so I guess it’s been able to survive that long.

I made a good number of contacts on this radio on AM and SSB barefoot, the audio was excellent. The receive wasn’t as good as my Cobra 146 GTL or my Magnum Omegaforce, but it was better than a lot of other SSB radios I’ve owned.

I sold the radio because it was in a little rough condition and I didn’t like the overheating while DXing. The overheating probably only was occurring due to the high output of my particular radio, I would doubt that it was a problem with all 148F models.

This radio is not to be confused with the COBRA 148 F GTL DX. That radio was an export radio as it had extra frequencies and FM straight from the factory. 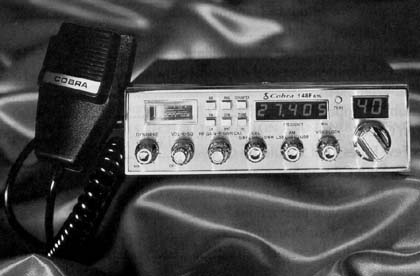