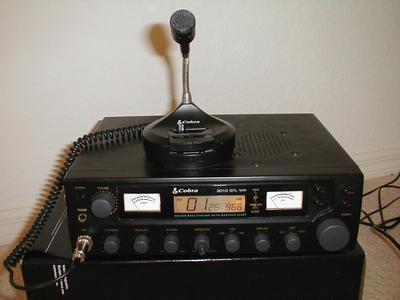 This was Cobra’s attempt at a cheaper and newer style replacement for the Cobra 2000. As everyone knows the Cobra 2000 was one of the best radios ever, and is very sought after.
The Cobra 2010 is a nice radio, but fell short of being comparable to the Cobra 2000.

Radio has a top facing speaker which is a pretty crappy sounding speaker in my opinion..

This radio does have dual meters which is something I always appreciate on a radio. One meter for RF signal and one for Modulation and SWR. The digital display shows channel, mode, frequency, and RX/TX notification to let you know when you are transmitting.

The built-in Frequency counter is only 5 digits long and so it really isn’t useful for anything unless you decide to add extra channels to the radio. If you choose there is a button option to have the time shown on the display.

This radio was very nice looking and I liked the way the knobs and buttons were placed. I liked the dual meters. I wish the frequency counter would have been 6 digits like the cobra 2000.

The receive on the radio was okay – my magnum radios have much better ears. The radio worked fine on AM – pretty good audio once peaked (not loud by any means though) and good swing, but on SSB the audio wasn’t great and the swing was very disappointing. My particular radio had better swing on AM than SSB so I don’t know if this was just my radio or the Cobra 2010’s in general.

The radio board is very easy to navigate to adjust internally for modulation and output power.

Overall the radio is packaged very nicely and I like the layout, but the performance for a SSB radio was nothing impressive. And as for the frequency counter – without the 6th digit it’s pretty much useless. The radio came with a power microphone stock, but I never got to try the microphone as it was broken when I received it, which may not say much for it’s durability.

I’d recommend an older Cobra 2000 or Uniden/President Washington Base any day over this radio. The audio on those models would flat-out smoke the audio on this radio. And they sound better on SSB.

The things that this radio does have going for it are the weather channels, emergency weather alert tone (radio on or off, as long as it is plugged in if a weather service alert is issued the radio will beep), and the dual meters.

When I first saw this radio I had hoped that it might be something special, but in reality it’s very mediocre. Many people will like it for the digital look and the sleek case, but even if they can get it talking where they like it, it still can’t compare to the original Cobra 2000 GTL.