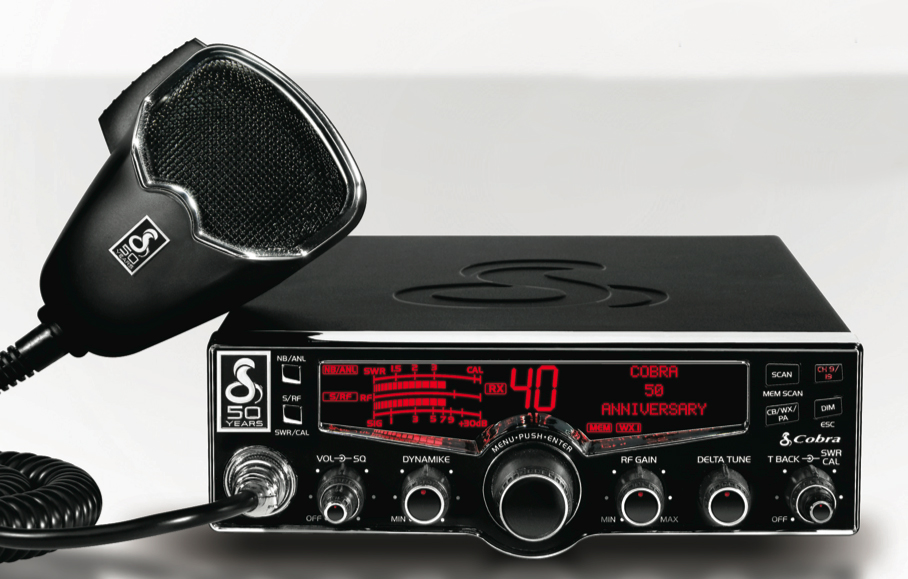 In the last couple of years Cobra has come out with a number new models that were variations of their famous Cobra 29 LTD. Perhaps the most interesting recent model was the Cobra 29 with Bluetooth, but the one thing that hadn’t changed with these radios for many years was the traditional styling.

This year Cobra has released a special edition 50th anniversary Cobra 29 with a digital display and styling that is likely to be the future of CB radio. Initial press releases said there would only be 20,000 of these special edition radios produced but I haven’t seen that figure stated again lately so maybe they changed their minds and plan to make more. I think either way we are looking at the future of Cobra 29 radios.

People usually worry when a company makes an upgrade to one of their radios. Will it have the same output? Will the audio be as good? Did they change the noise blanker? Have no fear, while the front of the radio looks vastly different from previous models the circuit board and components are virtually identical to other Cobra 29’s. The adjustment points are in the same locations and the same modifications will work.

Even before you see the radio you’ll notice the box for this radio looks different than most CB radio boxes. It definitely has a look that says “This isn’t your typical radio, this is something special”.

Once you open it up you’ll find a cardboard box that contains the radio, manual, mounting bracket, microphone, power cord, and mounting hardware.

Everything is well packed and wrapped in plastic. 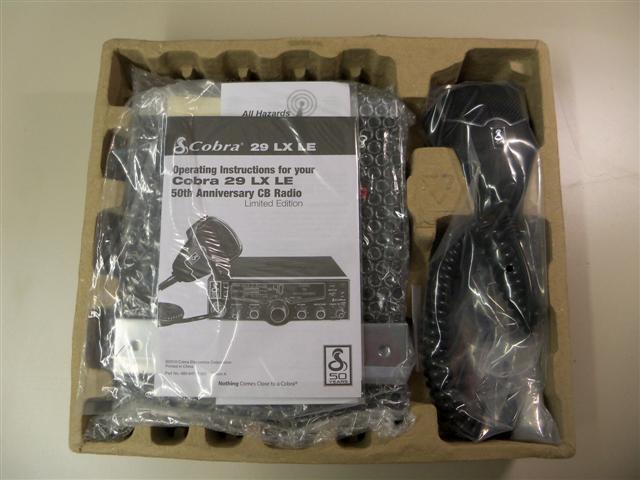 Looking at the radio from the side you’ll see that it has one hole on either side and it comes with metal thumbscrews for mounting to the bracket. 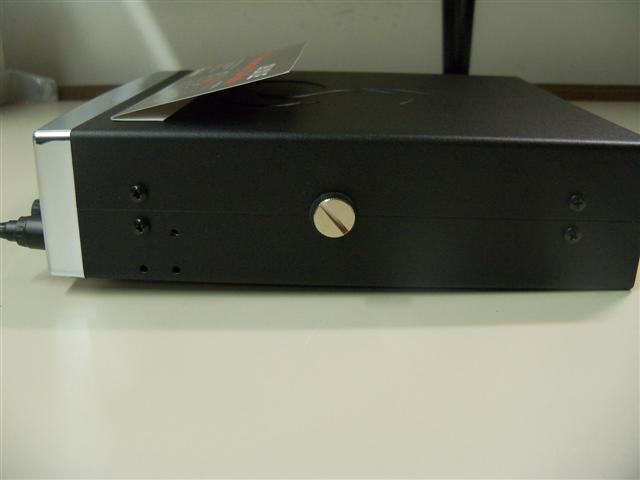 The back of the radio looks very traditional. Antenna input, standard 3 pin power cord connection and a public address and external speaker jack. 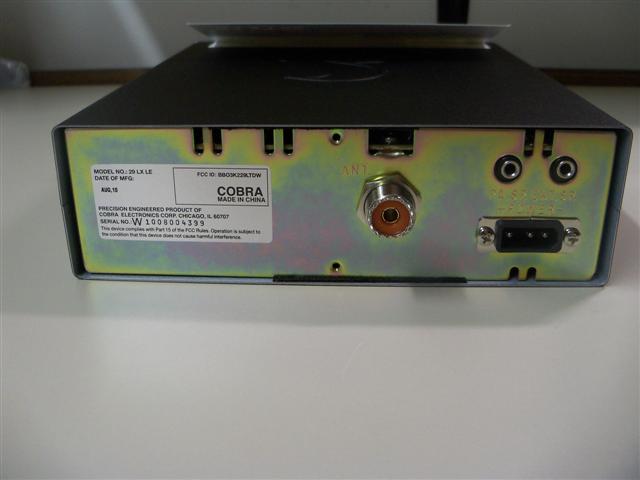 There are a total of 6 knobs (two of which are dual control) and 6 buttons on this radio which give it a very clean and uncluttered look.

With many new radios when they try to add a large variety of features it can mean knobs placed too close together or buttons which get pressed by accident. Cobra has done a very good job with this radio and it allows you to control the more traditional features via knobs and the other options with the main menu button and digital display. 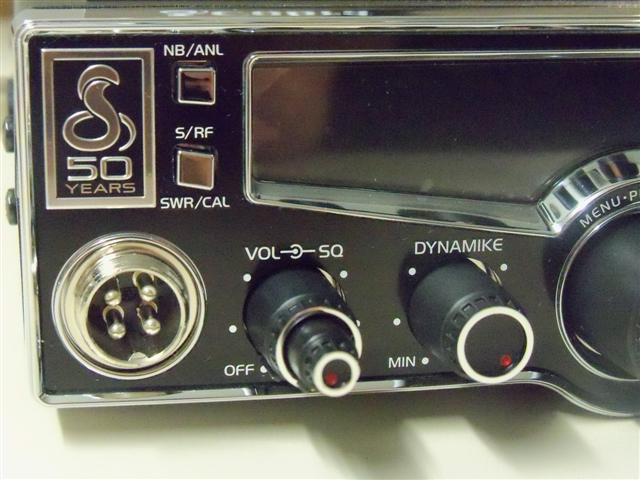 The knobs from left to right are as follows –

Buttons from left to right are –

Since most of the controls are fairly common for this review I’ll focus on the more unique controls and options.

Talkback – This control is a variable “talkback” potentiometer which allows you to hear your voice through the internal (or external speaker) as you talk during transmit. This feature is useful for hearing how a certain microphone sounds or adjusting echo on a echo microphone. The talkback on this radio is acceptable but it doesn’t go much beyond that. While it is variable the quality of talkback is slightly distorted and it definitely can’t compare to radios that have true talkback boards installed.

Scan – This radio has the ability to scan through the frequencies. A great feature for finding out where people are talking on the radio and it saves the trouble of having to manually rotate the selector through the channels. The scan feature on this radio has two types of modes. It can scan all 40 channels sequentially or it also has the ability to scan stored memory channels. The scan feature also works for scanning through the weather channels available on this model.

Multiple display colors – The digital display is bright, well lit, and is much easier to see than previous Cobra 29 models. I found the colors vivid and with the ability to adjust brightness and contrast it was easy to adjust the display to my individual needs.  The menu to adjust this feature can be accessed through the new digital display utilizing the menu knob/button (channel selection knob).

Digital SWR / RF / SIGNAL Meter – In the picture below you’ll see one of the new features made possible by the use of the LCD display. This new meter replaces the old style mechanical meter found on previous Cobra 29 models. This new meter functions in three modes. The first mode is a S/RF mode in which the meter will display the signal strength of incoming signals in receive mode and show your relative output power in transmit mode. The second mode is a CAL (calibration) mode for calibrating the radio for SWR. The final mode is a SWR mode to test your standing wave ratio. 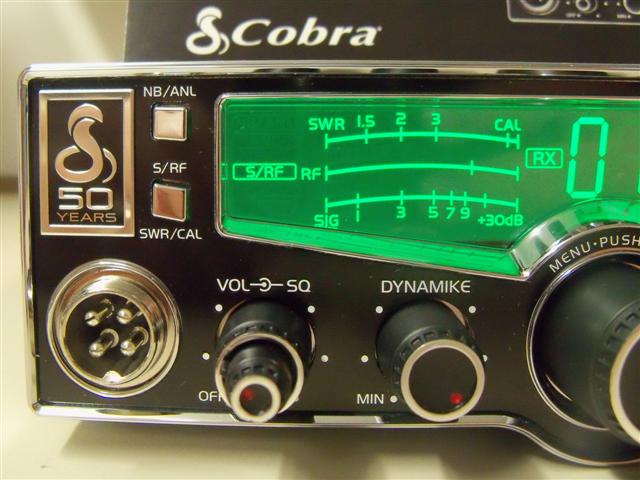 For the rest of the display you’ll have a digital channel display, as well as a 5 digit display of the frequency that corresponds to that channel. It will have RX and TX indicators and will also have text showing the full words “receiving” or “transmitting”. 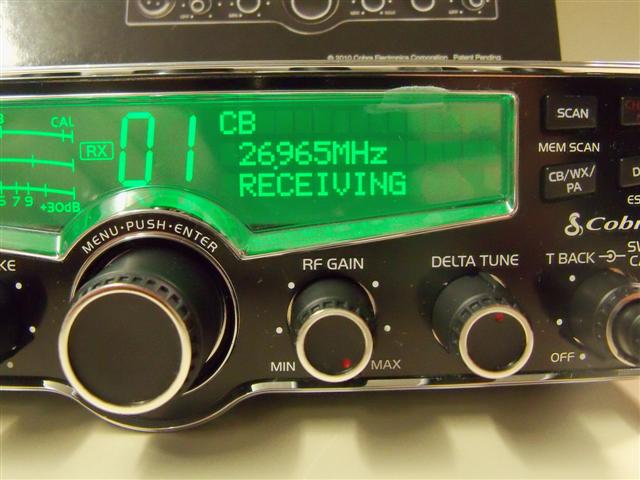 One of the new controls we mentioned earlier is the menu knob shown in the picture above. It’s centrally located on the radio and it changes the channel when turned left or right or when it is depressed inward it puts the radio into a menu mode.

In this menu mode you are presented with the following options –

These menu options are very cool new feature and allow you to really tailor you individual experience with the radio.

Please see the video below for a full demonstration of these menu options.

While the main board for the Cobra 29 LX LE is still fairly similar to previous models the display and controls at the front of the radio require the use of special circuit boards and you can easily see them in the picture below at the front of the radio. These boards make use of surface mount technology and they really are what drive all the new features on this radio.

The Cobra 29 LX LE comes with a special 50th Anniversary microphone. While it has a nice look to it the performance is similar to other Cobra stock microphones which is poor and I highly recommend ditching it in favor of a solid power microphone. 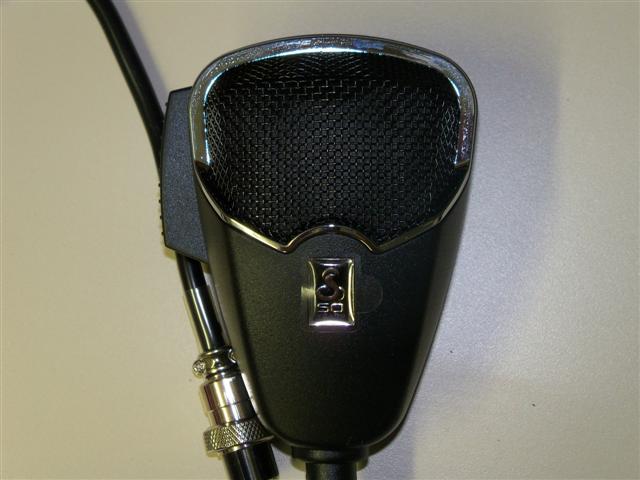 Transmit power on this radio stock from the factory was a 3 watt carrier with modulation swing to around 10 watts. Once the modulation had been adjusted the radio had a carrier of 3 watts with swing to 15 watts.

Modulation from the factory was around 85% and was easily increased  to 100% by adjusting VR4 inside the radio (AMC Potentiometer) . Modulation was typical for a Cobra 29 and with the addition of a power microphone it sounded loud and clear.

I really like this radio for two reasons. First, Cobra finally brought their products to the 21st century with an updated design and new features. Secondly, Cobra didn’t mess with a good thing when it came to making changes to the transmit and receive portions of the radio. Some people might complain that Cobra didn’t make the Cobra 29 any better, they just added some bling to the radio and they might be right except for the fact that the new interface and features do improve the users experience with the radio. It’s easier to see the channel display, you can adjust the color, you can scan the channels, and you can store and scan memory channels.

Now even though I found myself drawn to the new display I’d be failing my readers if I didn’t point out a couple of things that drive me nuts with this radio.

The dual control knobs on this radio are awful. The volume knob is difficult to grab with your fingers and once you have a hold of it the knob is hard to turn. Same thing with the talkback knob. Now there are only two dual controls on this radio so it’s not the end of the world, but the volume on/off knob was the one that really annoyed me. Maybe I just have big hands but I found it difficult to turn the radio on and off compared to previous models.

My only other real complaint is probably the bigger issue. Lack of NightWatch lighting on the control knobs make this radio hard to use in a vehicle in the dark.

The knobs are black and have no reflectivity making them hard to locate in night conditions. On older Cobra’s without NightWatch because the knobs were chromed they at least would reflect some light inside the vehicle so you could make a guess at which one to turn. If they had been able to do backlit knobs of some sort on this model or added the Nightwatch type feature it would have really made the radio a slam dunk.

Overall I’m impressed and the new radio definitely has it’s selling points. The more modern styling is much more suited to the newer vehicles of today and the display and features will garner more attention from those operators who like to tinker with their options. No need to add blue LED’s to your Cobra 29 anymore to make it look cool, you can change colors with the touch of a button.

I’m not sure how well the menu knob will hold up over time and I’m pretty sure the display will be the first thing to go wrong if the radio is going to develop problems but only time will tell on the quality.

Big props to Cobra for taking the risk on the new technology, now if they can just make a SSB version I think they might be on to something.