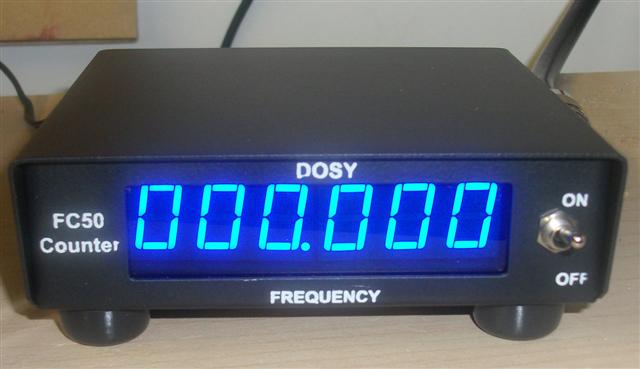 Recently I had a friend contact me who had purchased a Uniden Grant that had been modified for extra frequencies with two switches.  He couldn’t figure out what frequencies he was on or how to use the switches to get to the upper and lower frequencies. Although there is a chart available online to show how to access the channels after that modification, I told him that the best thing he can do is purchase an external frequency counter.

The most readily available in-line external frequency counter currently on the market is the FC50 made by Dosy. I decided that I should do a review on this product because it is fairly unique and one of the only “in-line” frequency counters marketed directly to CBer’s.

The Dosy FC50 is a 6 digit external frequency counter with blue LED’s and an on/off switch. On the rear of the unit are two SO-239 connections for coax (one IN “from the radio” and one OUT ”to the antenna”). The frequency counter is powered by a small wal wart that comes with the frequency counter for use in the home or it can be powered in a vehicle as it runs on 12vDC.

What is an “external in-line frequency counter”? 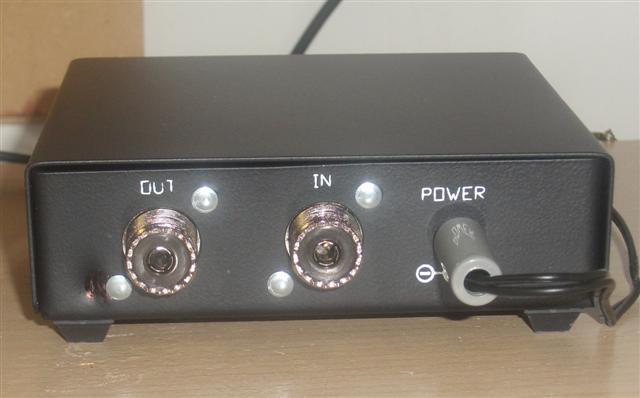 It works like this: when you key your CB on a channel (let’s use channel 6 for this example) the external in-line frequency counter will read the signal and will display the actual frequency at which you are transmitting, in this case 27.0250. 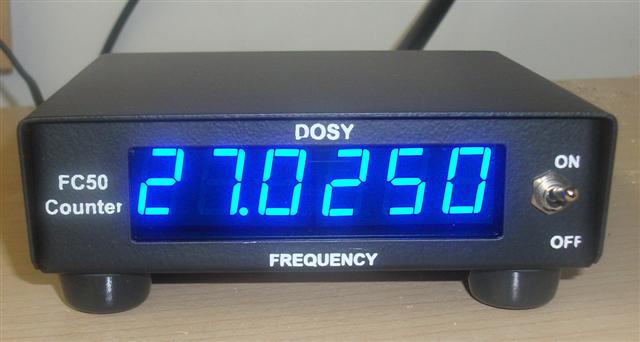 Let’s point our three good reasons that CBer’s should own a frequency counter:

1)      A frequency counter allows you to make sure your transmitted signal is being transmitted on the correct frequency.

First off – when operating a CB radio an important aspect is to make sure that you are transmitting on the correct frequency. If your radio says channel 19 (frequency of 27.1850) you want to make sure that all of your signal and output power are going out through your antenna on that exact frequency. What many CBer’s don’t realize is that it’s common for CB radios to be off frequency either because the radios have been effected by age, moisture, heat, or merely because the factory didn’t align the radio properly to start with.

A radio that has drifted might be transmitting on 27.1853 or 27.1855 (instead of 27.1850). In some cases on the receiving end they may not be able to tell there’s a problem but in other cases the audio coming through might sound distorted or fuzzy. Having an external frequency counter is very helpful in being able to monitor what your actual transmitting frequency is and being able to do self adjustments to correct any problems. If you are off frequency your output wattage isn’t being directed where it should be, which can limit the effectiveness of your transmitter and your transmitting range.

Many export radios these days come standard with an unlocked clarifier, but many of the radios themselves don’t have frequency counters. So while you’re given the ability to “slide” in between channels you may not have any idea of the exact frequency you’re transmitting on. A lot of CBer’s like to modify their older CB’s and unlock the clarifier on those radios but once you do so an external frequency counter becomes a “must have” accessory.

3)      When adding extra channels or frequencies (often called upper and lower channels) a frequency counter allows you to see if you’ve done the modifications correctly and shows you the new frequencies.

When we talk about modifying radios perhaps one of the most common modifications people do is to add “extra frequencies” to their radios. This is when people take a standard CB radio such as a Cobra 148 or President Washington and add a couple of wires and switches in the right places to allow the radio to transmit on frequencies above and below the CB band (often referred to as Uppers and Lowers or “freebanding”). In many cases these types of modifications involve installing two switches which are used to jump around in the frequencies, but to keep track of where you are transmitting you’ll have to constantly refer to a channel chart which can be annoying. An external frequency counter lets you immediately know where you are transmitting, making it the perfect tool for an older radio that has “extra channels” added to it. I’ve often had people tell me they bought a radio that has been modified and they can’t seem to figure out on which frequency the radio is transmitting. An external frequency counter is the way to go.

I’ll also mention that if you have a radio where the LED’s have started to burn out and you are having trouble telling what frequency you are on an external frequency counter can be very helpful.

(In the picture below you’ll notice the radio has burnt out LED’s but the counter tells us we’re on channel 38 (27.3850). The radio is off frequency slightly. Time to do some tuning!) 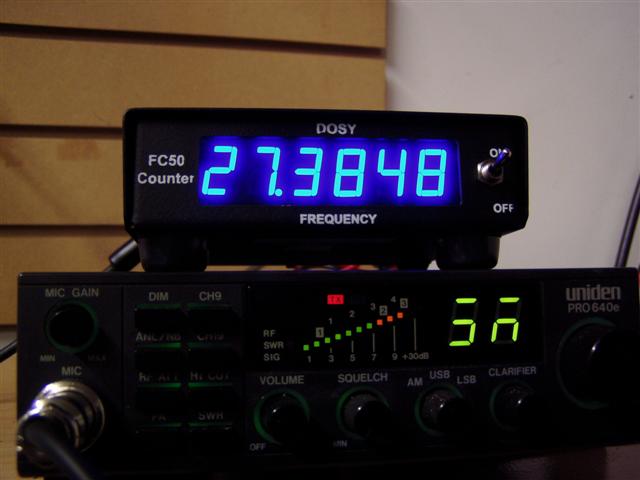 Before we go further I’d like to make an important point. If you are an operator who runs SSB, an external frequency counter is not going to give you a steady frequency readout of where your are transmitting. Because of the way single side band works the frequency display on an external frequency counter will jump around all over the place as you talk and the frequency shown will change with the pitch of your voice. The only way to get a steady reading is with a tone generator which is not what most CB operators would be looking to do. If you are looking for a frequency counter specifically to track your TX location while in a SSB mode you’ll need to buy one that can be hard wired (soldered) to the radio. If you have a SSB radio and are using it in AM mode in conjunction with this counter the Dosy FC-50 will work perfectly.

The Dosy FC-50 frequency counter has a metal case. Opening it up shows us the circuit board inside mounted to the frame. You can easily see where the SO-239 connectors are mounted at the rear of the unit and up front you can see where the six digit LCD display is connected to the circuit board. The unit feels fairly solid and the build quality seems well done with the exception of one wire that was stray when I opened up my unit. It looked like maybe it had come loose in shipping so I soldered it back on and everything worked properly. 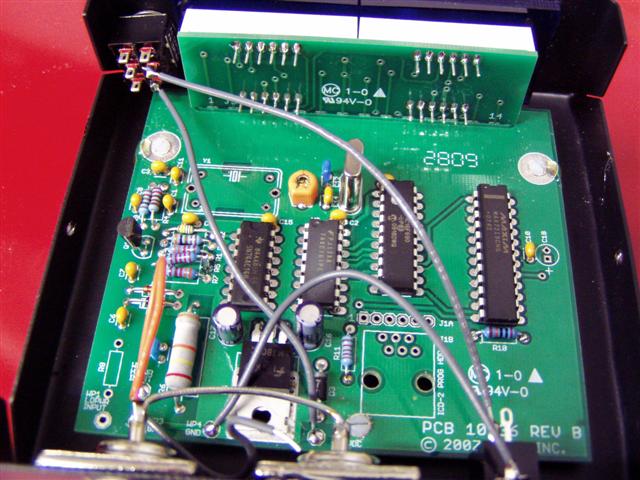 We did test the unit for accuracy against our two other counters we have on hand and found the Dosy unit to be within .0001 Mhz of the readings on the other two counters. For the price of this unit that type of accuracy should be acceptable to the majority of operators. This unit is rated for 500 watts and I did confirm with Dosy that the rating is for 500 watts continuous.

The Dosy FC-50 is made in the USA which is refreshing to see in the radio industry. While some of the parts are probably made elsewhere, to carry that designation the unit must be assembled in the United States. It’s nice to know that there are still companies in the USA making radio equipment. 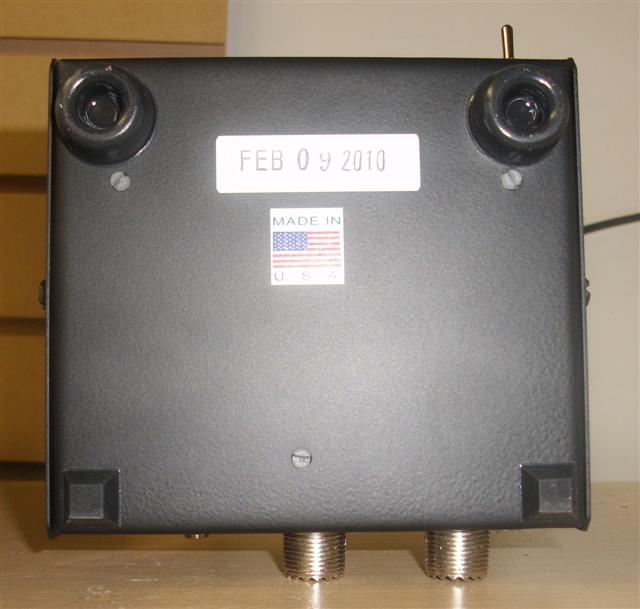 After using the Dosy FC-50 for a month I really could only find one real complaint and that was the lettering on the unit seems to be a bit rough. Although it’s a brand new unit the lettering makes it look older or used but I can live with a slight cosmetic blemish on a counter if it’s mechanically sound.

Overall I really like the blue lights and the compact design of this counter. It does exactly what it’s supposed to do with good accuracy and a low price. There are very few “in-line” external frequency counters available which really means if you need one, the FC-50 is the best candidate.