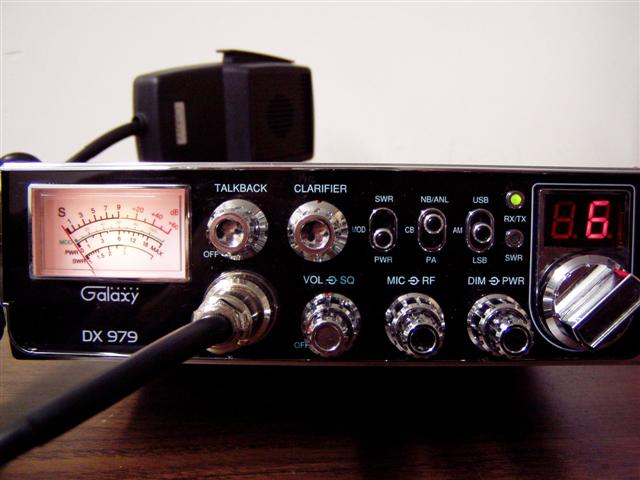 I’ve been a big fan of the Galaxy DX 959 for a long time so when I heard that Galaxy was making the DX 979 I was really excited. This new radio was smaller and also incorporated the StarLite faceplate so I put aside some money and waited for it to come out.

Somewhere along the way I got sidetracked and my money got spent elsewhere. I didn’t buy a 979 when they first came out and I just finally got one last month, but better late than never.

The size of this radio impresses from the first time you see it. While not as small as a Uniden PC122XL it’s definitely smaller than the Cobra 148 GTL, Galaxy DX 959, or any other sideband CB on the market in the U.S.. Adding to this small footprint is a front facing microphone jack. Overall this is a very compact unit.

While I’ve always liked the DX 959 the 5 digit counter is pretty much useless for SSB use, so I actually prefer the 979’s ability to add an external six digit counter easily by just plugging it in. 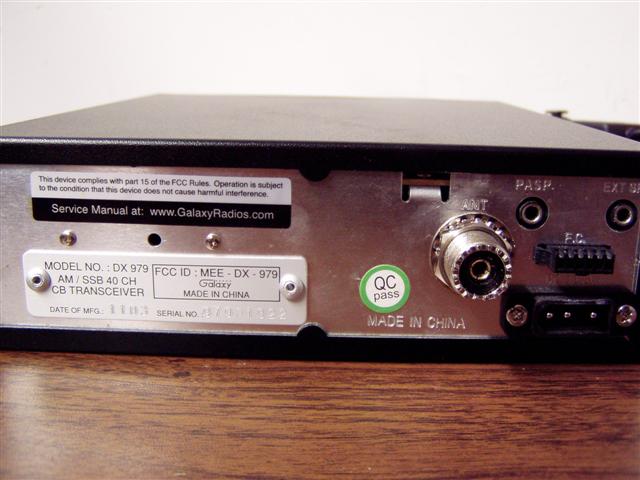 Features and more features! I’ll never understand why the rest of the industry didn’t start adding these features till recently, but having factory talkback and variable power is something that should be on every radio.

Galaxy really made something special in designing a smaller sideband radio that still had lots of features.

Factory Talkback – This is a great feature to hear how different microphones sound, or if you’re the type to add an echo microphone you’ll be able to hear how much echo to add. The level of talkback is variable so you can have it nice and loud, or keep it barely audible.

Variable Power – Something every radio should have added from the factory. The variable power allows you to deadkey as low as 1 watt or at the maximum deadkey and swing upwards from there. If you plan on adding an amplifier later this is a great feature.

Large Meter – Perhaps one of my favorite thing about Galaxy radios is the large S-meter. It’s easy to read, and has 4 different scales on it (S Units, Modulation, Power, SWR). When you glance at it while driving it’s much easier to read than the smaller meters found on the older radios. 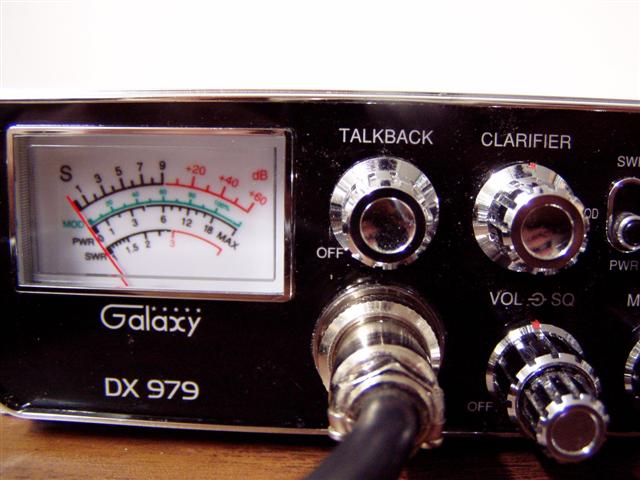 The radio also has an auto calibrating SWR feature so no more messing with a calibration knob. Just set it to the SWR position and it will tell you what you need to know. There’s also a SWR warning light in case it ever jumps to a high level.

On the same switch is an option to see your modulation level which is also a nice feature. 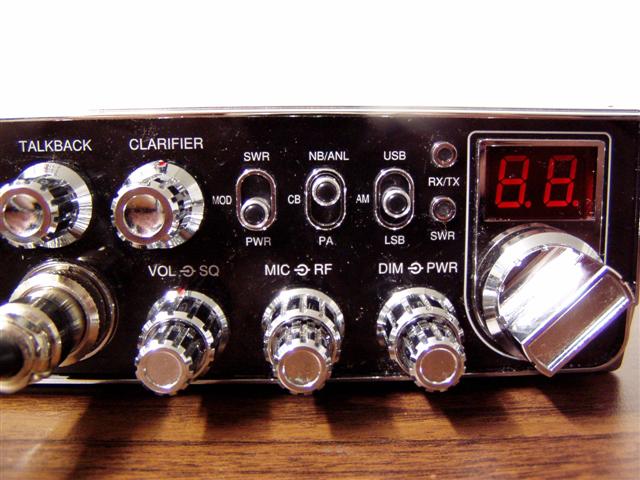 The Galaxy DX 979 also has what they call a StarLite faceplate which is a very nice lighting system to show the locations of the knobs for ease of use at night. I used the radio in the car at night and this lighting was excellent, allowing me to see everything I needed and making it easy to make adjustments in low light conditions.

My only complaint on this particular older DX 979 would be that maybe the meter light could be colored to match the faceplate display colors, but that’s something I’ll probably do myself later. The newer version of the DX 979 does have the blue LEDs in the meter and channel display and Mosfet Finals. It’s easy to tell if a DX 979 has the newer finals by looking at the color of the LED’s. 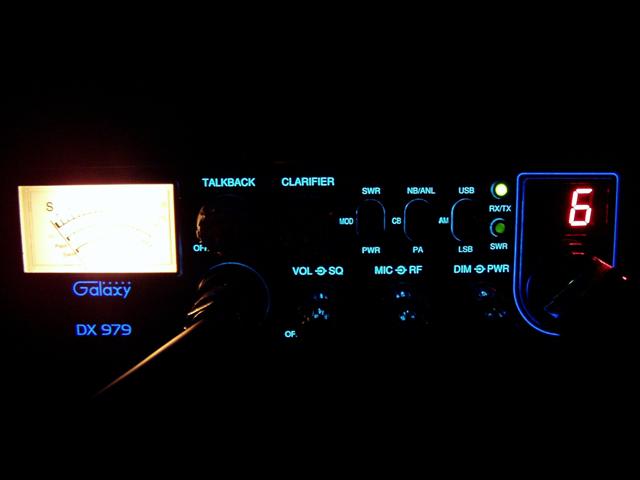 Again and again in Galaxy reviews we talk about the loud AM Galaxy audio. The 979 is enough like the other models that it’s performance is very similar.

I turned up the modulation and the radio really comes alive. I tried a power mic and also a SRA-158 and with both I was greeted with loud, clear audio. It’s punchy like the 959 but I found it to be ever so slightly softer in the tone which makes for nicer listening on the other end.

As for a tune up on this radio I merely adjusted the modulation (see video for adjustment points), set the high and low power setting where I wanted them on the variable power and I was ready to go.

You can set the radio for a low deadkey and swing upwards from there or you can turn the variable up and deadkey 4 watts and swing upwards (this radio can deadkey higher than 4 watts but it’s not recommend by the factory to set it higher).

Swing numbers on this radio are impressive. With just a simple modulation adjustment these new Galaxy CB’s are swinging over 20 watts on AM and 25 watts on SSB.

I have made multiple local and DX contacts with nothing but good reports on this radio.

The receive is excellent but the noise filtering isn’t quite as good as the DX 959, TR-696FD1, or other older SSB radios. It has a NB/ANL position but it doesn’t seem to filter as well as that same position on other radios. Although the background noise is a bit louder when used mobile I found the sensitivity on the receive made up for it allowing me to hear stations some of my older radios weren’t picking up.

The only real downside to me is that this radio does suffer from mild SSB drift during warmup. This just seems to be a trait associated with SSB radios these days, especially with the 959 and 979 models. Adding a frequency counter is helpful if this an an issue for you.

Speaking of frequency counters – the DX 979 doesn’t have one. It’s a much smaller unit than the DX 959 and also has the front microphone jack making it much better for tight installs, but it doesn’t have a frequency counter. Galaxy was nice enough to add an external jack on the back though so you can easily add a counter to this radio.

I found out in this process that although many CB shops online are advertising that this radio will accept either the FC347 or FC390 frequency counter that the “Galaxy FC390” counter I had did not work on the radio. I talked with Galaxy and they told me that the Galaxy FC390 is not manufactured by them and the name and logo are being used illegally by some other company. I also talked to Ranger and the Ranger FC390 doesn’t work with the DX 979 without doing a small modification to the frequency counter. I did mod my FC390 to work on the radio but it’s not the easiest mod for most people.

There are lots of fun mods for this radio. You can add extra channels, a roger beep just by adding a jumper between two points (see the instructions on the Ranger 696 FD-1 Review for similar instructions), and you can also unlock the clarifier (instructions on CBtricks.com).

I did opt to unlock the clarifier to help counteract any issues with drift. After doing that and adding a frequency counter you can easily control your transmit and receive frequency in case you need to adjust for drift.

My overall impression of this radio is very positive. Yes the drift on the Galaxy SSB radios can be a little annoying but you’re rewarded with excellent receive, transmit output, and that great Galaxy audio. Additional this model has theStarLite faceplate, small size and front facing microphone, and just a ton of other great features and possible mods.

After recently using a 959 and 979 I easily can say I prefer the 979 for the overall look, styling and performance.

I’ve used this radio for over a month on the base with a Turner +3 microphone and have been very surprised at the number of barefoot DX contacts I’ve been able to make. While my Cobra 142 GTL is a great radio, it just wasn’t reaching out into DX land like the 979 seems to do.

Picture of the front of the board on the Galaxy DX 979 – note the Roger Beep small box area on the board in the lower right front next to the light blue capacitor. It will be labeled with a “R.B.”. 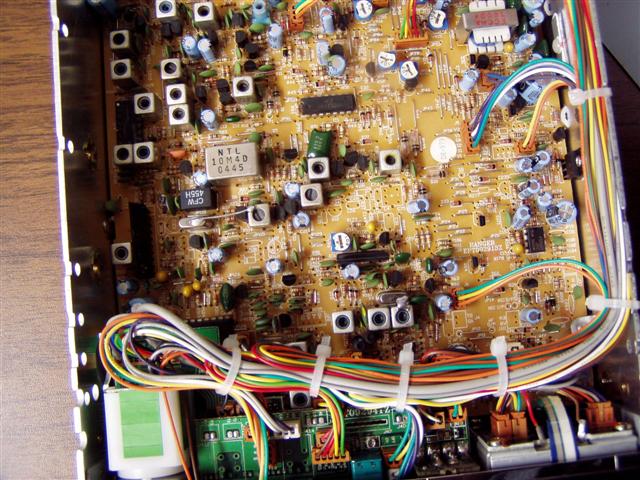 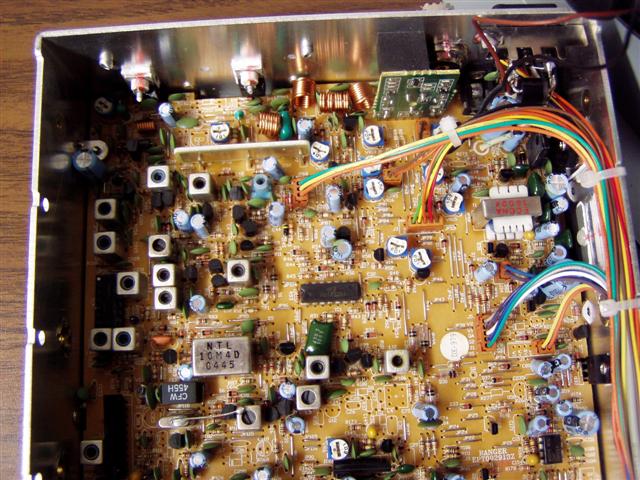