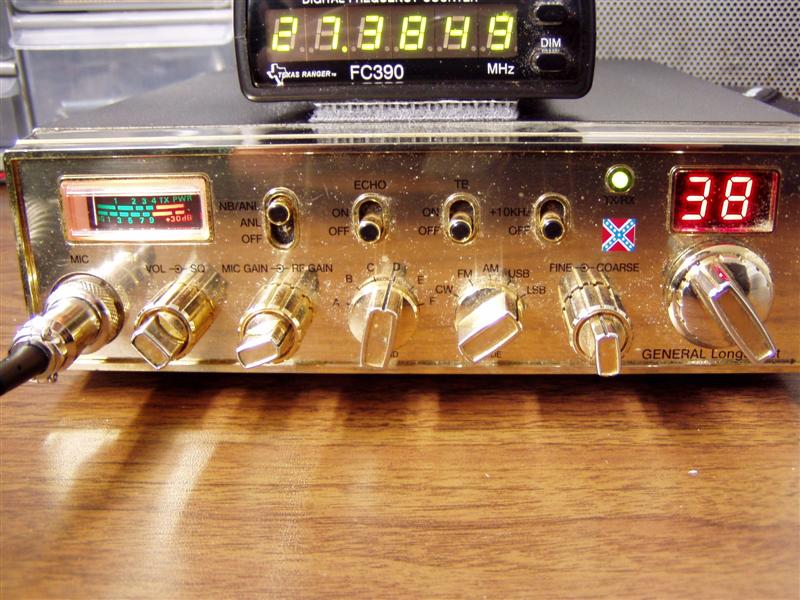 When I was living in Hawaii I saw a General Longstreet on eBay and was intrigued. It looked a lot like the Galaxy 77 but had some minor differences. The price was right and so I placed my bid and a week later I had the radio in my possession.

The first thing that is unique about this radio is the color of the face. It’s a mellow gold color and as you can see from the picture it has a very shiny finish that likes to attract dust. The face has the small confederate flag identifier on it which immediately lets you know that it’s made by General (makers of the General Lee, General Grant, General Washington and others).

The layout of the radio is the classic old school knobs and switches. The knobs on this radio all have a very solid feel which is a often a picky point for me. I can’t stand radios with little flimsy plastic knobs or ones where they are loose or have too much play in them. I like knobs to move easily but stop and stay where you leave them. Although I love the Magnum radios (257, Omegaforce, and S9) I wish they could get their knobs to have the feel like this radio.

The radio has most of the standard features –

I really like the control scheme on this radio and I’ll tell you why. It’s easy to use and it make sense. A lot of people love to play with their echo endless and annoy everyone. If you like to do that than don’t buy this radio. The echo has a on/off switch on the front and a control setting inside the radio. You remove the bottom/speaker cover and adjust the echo amount and time delay to your liking, then you close up the radio. When you want the echo you flip the switch on. Simple.

Echo is one of those things to me that can be fun if done right, but truthfully it’s not something that you should be playing with constantly and this radio takes that to heart.

It’s rare to find talkback in a radio with a switch where the resistor installed by the manufacturer gives just the right amount of talkback, but the people at General nailed it on this one. It’s great. Loud and clear when it’s on, and flip it off when you don’t need it.

Only downside is that it’s not all-mode talkback like you get with the Magnums so talkback in SSB mode doesn’t really happen.

The fine control can be used for tuning your RX frequency, while the coarse clarifier adjusts both the transmit and receive frequency.

A frequency counter is really a must have when playing around with these knobs as you can easily end up transmitting on 27.3848 while receiving on 27.3855 if you aren’t careful. The nice thing about this radio is that it has the frequency counter connector built into the back of the radio so you can easily attach any FC390 frequency counter. The FC390 is a six digit counter that will display both your transmit and receive frequency when attached to this radio. When you key the radio watch the FC390 and move the coarse clarifier until you reach your desired TX frequency. Then unkey and adjust the fine clarifier until it matches that same number. Now your TX and RX frequency will be the same. 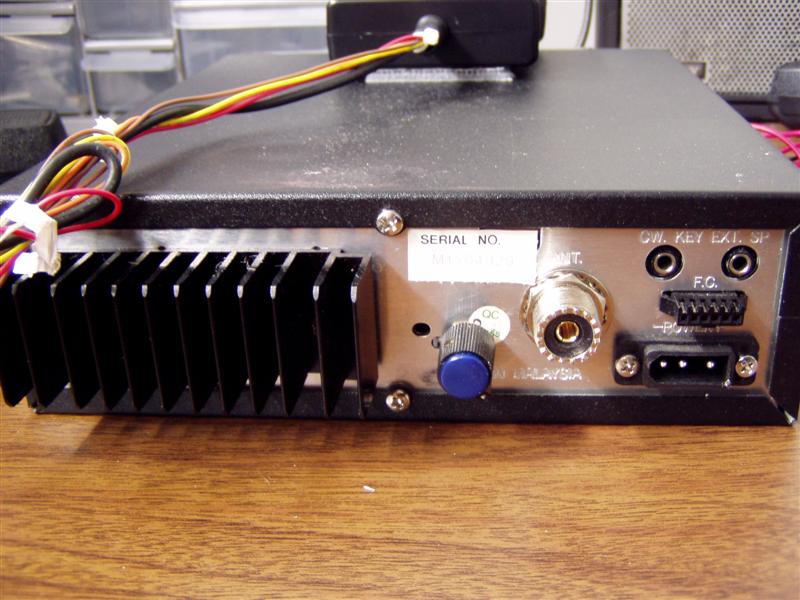 One of the downsides of the General Longstreet is it’s lack of a variable power control or a L/M/H power switch. If you wish to run this radio with an amplifier you need to either set the deadkey low and leave it there all the time, or have a tech install a variable power control such as the one shown on the back of this radio. This radio in particular is set up to deadkey 2 watts in the low position and 10 watts in the high position and everything in-between of course. The radio shown on AM will swing to around 25 watts. My last General Longstreet would swing to around 30 watts. It really depends on the tech who works on your radio and how you want it set up. On SSB the radio shown is peaking out at 32 watts. Pretty typical numbers for a dual final 1969 final radio. 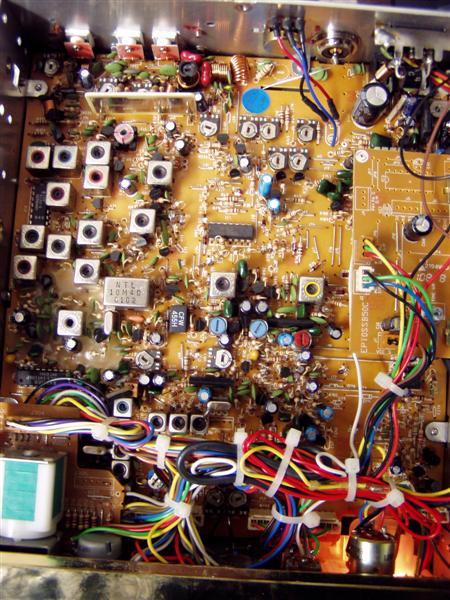 In the above picture you can see the echo board on the right hand side and the final transistors side by side at the top left of the picture. Also shown you can see where the technician who worked on this radio has wired the aftermarket potentiometer to the empty location on the board (where in the Galaxy radios a adjustable potentiometer would be found mounted to the board).

The modulation pot and SSB ALC pot are both labeled on the board but for the other pots and adjustments I’d suggest visiting CBtricks.com and looking at the Galaxy 77 for reference. 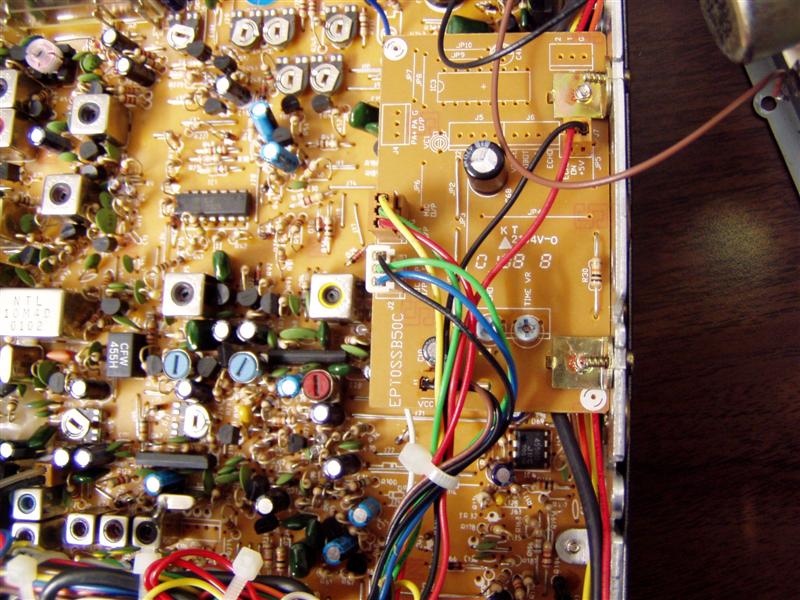 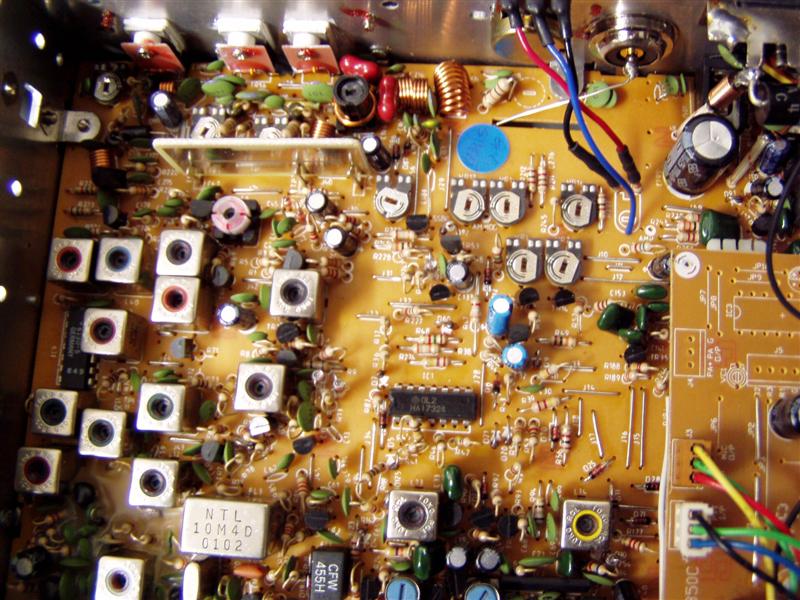 In this close up picture you can see the various adjustment pots and can see more closely how the variable power potentiometer was installed on this radio.

Another thing I like about this radio is the front facing microphone jack. Often in mobile installs space can be limited and a side mounted mic jack can be awkward.

This radio walks the walk and talks the talk. It has that loud crisp audio found in the Galaxy, Connex, and General radios. On AM it really has a great tone to it and how you sound with the TB on is how you’ll sound to the other stations in your area. If you set the echo just right it can sound pretty great as well – no distortion. On the subject of distortion and over modulation – do not add a power microphone to this radio and try to run it at full tilt. You will over modulate. This radio has great audio and my best suggestion is to use the supplied stock microphone. This radio comes with the famous SRA-158 which is one of the best response stock microphones ever made. Once the internal modulation is turned up the stock microphone will give you loud and clean audio.

SSB performance on this radio can be very good – I’ve done a lot of DX talking on these and they can sound very good if the ALC isn’t turned up excessively. The downfall on this radio and the many exports like it is the tendency to drift. It’s always worse when cold and once the radio warms up it will hold the frequency pretty well, but don’t be surprised if after 15 minutes you look down and see you’ve moved from 27.3850 to 27.3849. Not a huge deal, but many of these exports can’t hold the frequency like a HR2510 or 2950DX.

The last thing I’d like to touch on is the receive on these radios. Loud static is not an issue with these radios, they are very nice and quiet and the ANL/NB can filter out most engine and ambient electrical noise. I’ve had this radio on AM in my car and had to turn off the NB to hear the static to make sure it was receiving – it was that quiet. The receive quality is good and the stock speaker works okay but I always recommend a high end external speaker for best results.

Overall this radio is one of my all time favorites. It’s a great AM talker and can hold it’s own on SSB although there are better SSB choices out there if that is where you do the majority of your talking.

This radio has a great “feel” when using it and can stand up and deliver with great loud audio.

Lastly I like the uniqueness of this radio. You won’t see one of these very often and when people ask you what radio you’re talking on they’ll have no idea what it is when you tell them.