Going back to 12 watts

Article by “424” BattlewagonTwo months ago I was running an export radio into a high power amplifier into a large coil antenna on top of my vehicle. I had big 4 gauge wire feeding the power hungry system and heavy duty coax to handle the wattage. A funny thing happened last month – I had to sell my car. 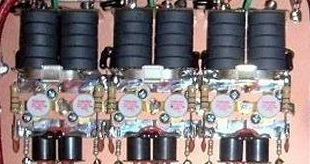 I had purchased a new car as the mileage on the old one was definitely getting up there and so I went through the long process of unbolting brackets, removing ground strap, disconnecting wires, plugging up holes and trying to return the vehicle to its original non-CB radio operator condition.Now once I was all done I of course started planning out the install in the new vehicle – where would the radio go, what size amplifier will I be running, and what kind of antenna should I use? I think that the planning that goes into installing a system in a new vehicle is one of the highlights of being involved in this hobby.I ran into a little problem along the way – I didn’t have any time to do my install for at least a month or two. Between work and family there was no way I was going to have time to sneak away to my shop and spend multiple uninterrupted hours carefully installing my new system. As much as it pained me to have to resort to going backwards in terms of complexity I found that if I wanted to run a radio setup temporarily I might as well just slap my magnet mount Wilson 1000 on the roof and throw my old Cobra 148 on a hump mount and use the accessory power outlet.

Within minutes I had my magnet mount antenna and bare bones 148 on it’s hump mount sitting between the two front seats. Aside from a peak and tune and an aftermarket microphone the 148 had no modifications to it and it was peaking on SSB around 15 watts output.

My first day in the car with this setup I could hear some distant DX almost at the static level and although I tried calling out to them 5-10 times I just couldn’t get anyone to come back to me.  Initially I was a little annoyed but the more I thought about it I realized that even with 500 or a 1000 watts I may not have been able to make a contact with those stations because conditions just weren’t working in my favor.

The next day the DX came in a little stronger and sitting on 38 LSB I waited until I heard a station come through over the top of the other stations. A station out of Florida was hitting me a S9 and so I gave him a shout over and over and again I wasn’t able to make a contact. A funny thing happened though, after my last call for the station in Florida I had a station in Missouri ask me to go to channel 39. Once I got off the busy frequency and up to 39 I had a nice 5 minute conversation with the guy on his barefoot Cobra 2000 station that was going into an A99 antenna.As we wrapped up the QSO I got a call from a guy out of Tennessee and I again had another nice 5 minute conversation. At times both of these stations asked me to repeat something, or the static level covered me up but there was no doubt about it, I was DXing with a barefoot radio just like my early days in CB.As the weeks progressed I found that going back to a 12 watts system means you have to actually work a little harder in a couple of respects –If you’re trying to talk locally, hills and small building that previously just dropped your signal by 1-2 S units when running lots of watts might now drop the signal right off the map.When shooting skip (talking DX) you’ll find yourself calling 10-20 times sometimes before anyone hears you or responds. In some cases you might not even make a contact that day.

You have to listen more carefully for stations that come in stronger because of the conditions. If the atmospheric conditions are making them boom into your radio chances are it’s a two way street and your signal has a better chance of reaching them.Talk as if every contact will only last for 10 seconds. With lower wattage you’re likely to get covered up by stations running power, or conditions might change enough that your low power station isn’t going to continue to be audible on the other end.Now all of these things are pretty self-explanatory and for some people who run barefoot all the times these things are just part of everyday life. But, when you run a high power station for a number of years you sometimes forget what it’s like to have difficulty making a contact. In fact talking DX on the radio with high power can almost seem reliable in some cases, more like a phone.

While making contacts consistently is arguably more fun I actually realized that in some ways I was cheating myself out of the true radio experience.I can recall as a young teen trying everything I could to make my station more effective. Better microphones, upgrading coax, and the endless tuning and raising of my antenna. I think every week I figured out a way to raise my antenna another 10 feet until I finally climbed a 70 foot tree with no climbing gear and stuck my antenna out the top. Dangerous and stupid but when running 12 watts you really tried to optimize anything you could for an edge.These days it seems everyone has an amplifier.

With less locals to talk to people are increasingly turning to DX for their enjoyment of the hobby and amplifiers are ensuring them more contacts. In fact many beginners these days buy an amplifier as part of their entry level system, before they even understand the basics of tuning their antenna or how to properly set their radio output to match up with the amplifier.After two months barefoot I have to admit that there is still something magical about making a 12 watt contact into Europe or down into Mexico. It’s also fun to think that anyone with a basic CB radio and an antenna can talk DX, no amplifier required.I’m in a new truck now and once again I’ve put together a system with my export radio and amplifier in place and I can honestly say I use my amplifier almost all the time I’m on the radio. I’m definitely not a purist in any respect, but I would suggest that everyone try going barefoot again for a couple of days if for no other reason than to earn renewed respect for mother nature and the amazing abilities of a simple CB radio.