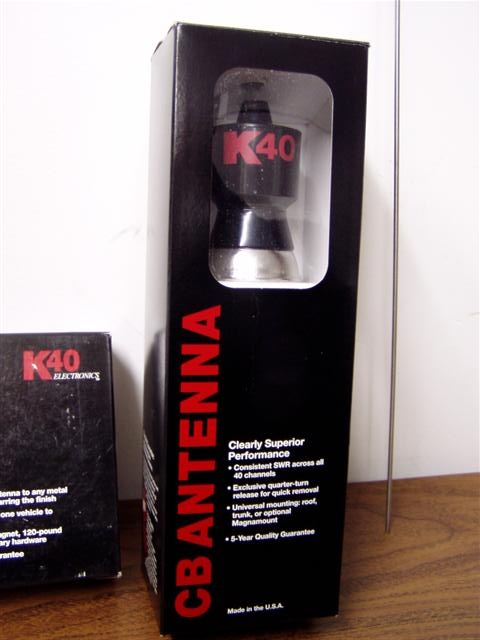 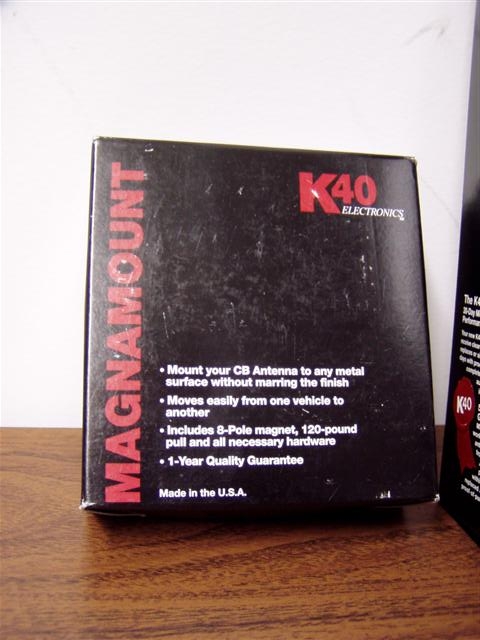 The K40 Trunk Lip Mount Antenna has been around for quite a long time and has proven itself to be a very capable and popular antenna. When you purchase the Trunk Lip Mount version of the K40, the antenna body comes in a box and the 58″ steel whip will come packaged separately due to its length.

After unpacking you’ll find the parts pictured below –

This antenna is very simple to install, and even more important to many people – its one of the most aesthetically pleasing antennas to look at once it’s mounted on your trunk. The trunk lip mount looks really clean once installed and doesn’t require any drilling or special tools. Most people can have this antenna installed in five minutes.

It simply fits over the lip of the trunk and two screws secure it in place and provide the necessary grounding for proper performance. 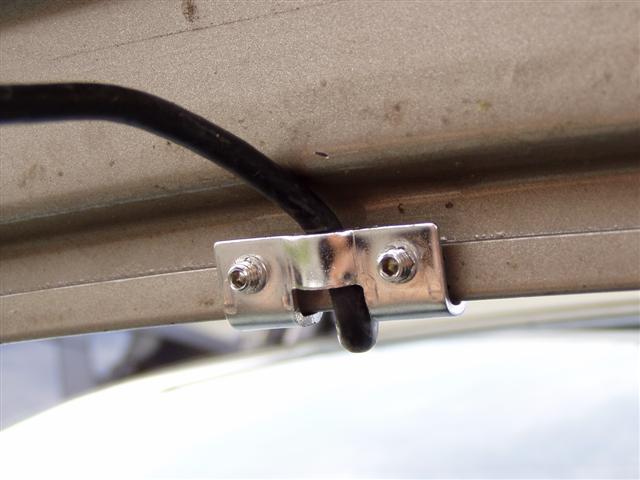 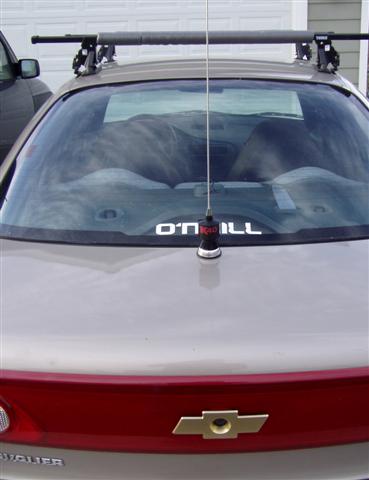 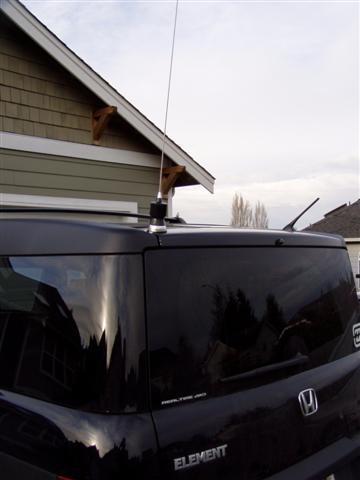 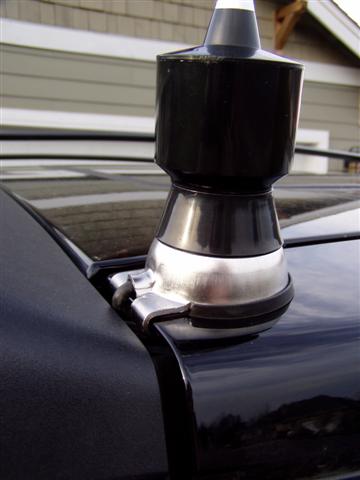 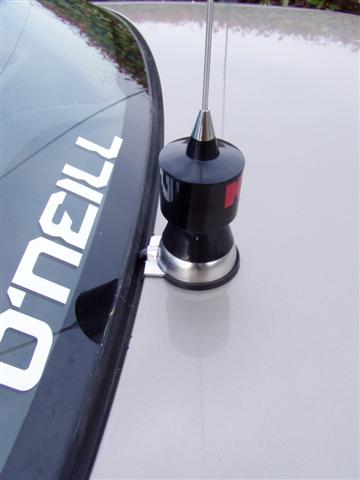 The picture below shows up close what the lip section looks like and where your two screws go to hold the antenna in place. 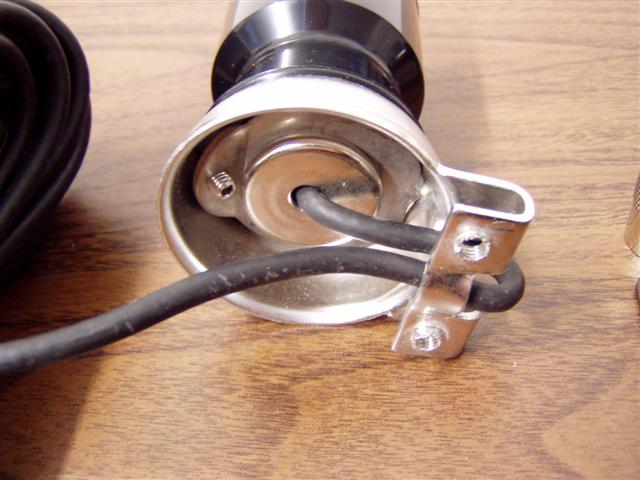 The K40 has a quick disconnect system which lets you easily remove the top section of the antenna with just a turn of the wrist. You can literally remove this section in three seconds and stow the top section with attached whip. This system is super handy if you park in a garage and want a longer antenna but don’t want to bang the antenna every time you park. It’s also a great security feature if you park in an apartment complex or maybe someplace in a city where you might be concerned about theft.

K40 also sells a small weather cap to put on the bottom section to give it a very clean look when the top section is removed and the cap protects against weather wear on the connector piece. 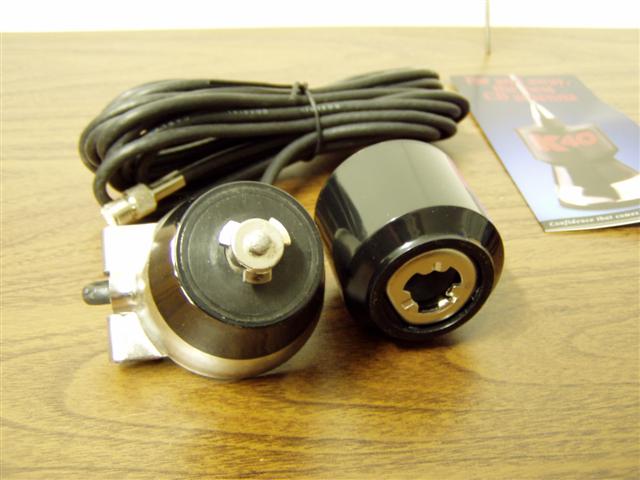 The K40 can also do something that few other antenna systems can match. K40 makes a special Magnamount System that is designed to accept the main K40 unit and turn it into a magnetic mount antenna. This increases the possible install locations since a magnetic mount antenna can be placed anywhere on the vehicle where there is metal and a good ground-plane, such as the roof.

Attaching the unit to the Magnamount is simple and requires only a couple minutes time. The Magnamount system comes with everything you need, including an adapter piece, and the magnet is very strong –  (8 pole, 120 pound pull) so no worries about it accidentally coming off. 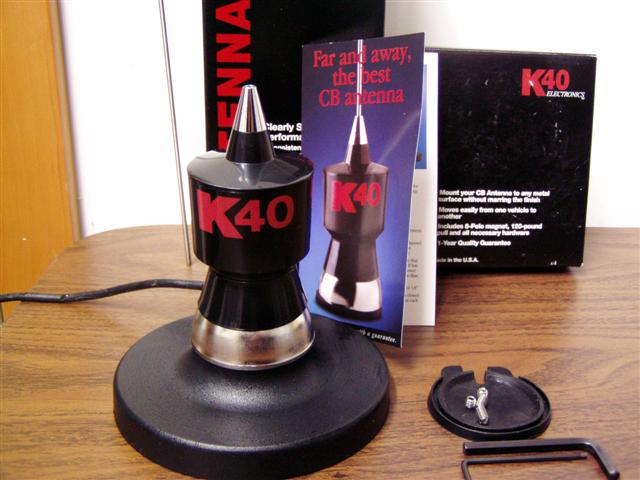 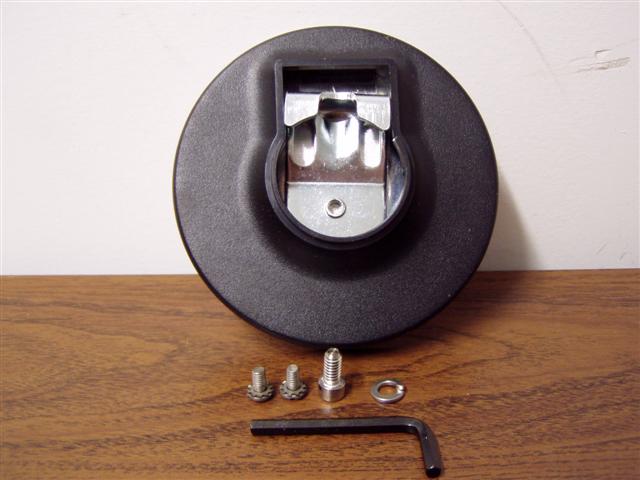 The picture below shows all of the design features incorporated into the K40 antenna.

This antenna is a base loaded type antenna and uses a special capacitor to guarantee that you’ll be able to achieve a good SWR. The K40 also incorporates a couple of features to reduce ambient static noise while receiving.

After I had installed the antenna I began tuning it, which is quite a simple process because the K40 allows the whip to retract into the coil up to 2.25 inches. This means that you should be able to tune your antenna without having to cut or trim the steel whip. All you would need to do is adjust the whip inside the coil for the best SWR. I was able to tune the antenna for a SWR of below 1.5 on all of the vehicles in testing. While on some vehicles I was able to get a lower SWR than others, the mounting location and size of the trunk played a part in the variance. The antenna performed exactly as advertised on all of the vehicles.

The receive on the K40 is excellent and compared to other well known antennas such as Wilson 1000 it definitely holds its own. I found the static level was very low (which is partly due to the antenna design and partly because a trunk mount antenna is farther away from the engine and its electrical noise). In all of my vehicle setups I always try to mount  for best performance, but keeping an antenna away from the engine area often helps reduce electrical interference and trunk mount antennas are a great way to go.

Transmit is also great with the K40. I was able to talk to multiple people in my area without difficulty and everyone said I sounded great and my signal strength was the same as when I use some of my other high end antennas. Unfortunately we haven’t had any DX in my area for a while so I didn’t get to shoot any skip with it, but I have no doubt I could have made some contacts on SSB.

K40 makes a specific point of telling you how well this antenna performs in their 30-day money back guarantee, something that impressed me.

“Your new K40 must transmit farther and receive more clearly than the antenna it replaces or simply return it within 30 days with proof of purchase for a complete product credit from the K40 dealer who installed it.”

Now it’s easy for an antenna manufacturer to say their antenna will outperform another and you’ll hear those types of claims often enough, but it’s really cool to see a company stand behind their statement by offering this type of guarantee. While I don’t necessarily believe this base loaded antenna will outperform a 102″ stainless steel whip antenna, I have no doubt that it will beat many of the other antennas on the market for RX and TX. Additionally, the materials and workmanship are guaranteed for five years from the date of purchase. I’m kind of old fashioned when it comes to standing by my word so I appreciate a company that believes in their product. K40 is also located in Pennsylvania so their antennas are made in the USA.

The last thing I’ll mention in regards to performance is the rated power level of this antenna. The K40 is rated for 500 watts maximum and in my personal experience with antennas I find that it’s best if you don’t exceed input by half of the factory rating. Because the K40 is designed with a special matching capacitor that allows it to achieve a good SWR in a variety of installs, it is better suited to those running barefoot or running smaller amounts of extra power. The K40 works great with just a tuned radio and I can attest to that as I actually ran this model K40 on one of my vehicles for five years with great results. When I sold the vehicle the guy actually liked my install so much he made me throw in the CB/Antenna as part of the deal.

To sum this article up – if something has been selling in the CB market for a number of years you better believe that it works. Products that didn’t meet their claims or were inferior disappeared long ago, and with the introduction of the internet CBer’s now can spread their reviews and opinions with the click of a mouse. So there’s a reason that radios like the Cobra 29 have been made and sold for 20 years and those same rules apply to the K40 antennas. The K40 is a quality, well designed antenna, built in the USA and it does what the manufacturer claims it will do – all things I find quite refreshing in this day and age.

(K40 antenna first being discussed in a 1978 CB Magazine)