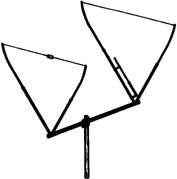 When most people buy their first base antenna for CB radio they pick up a simple vertical such as a A99, Imax, or Maco V-5/8. As they progress in the hobby they eventually look for ways to upgrade their system to receive better and talk further.

While adding things like amplifiers can make your signal be heard further away, they do nothing to help improve your receive abilities; actually when you compare the increase in distance you gain with an amplifier versus a high gain antenna, you’re better off upgrading your antenna system.

That’s where the Maco V-Quad makes its appearance.

Beam antennas that use reflectors or directors can have a very positive effect on increased gain for receive and focusing transmit power for your outgoing signal. Most people have seen the popular Yagi style antennas that use three, four, or five elements and take up large amount of real estate in the sky, but many people aren’t familiar with smaller beam antennas such as the V-Quad.

The V-Quad is an aluminum antenna that consists of a 6′ boom upon which two triangle shape elements are placed at either end. One element is the driven element and the other is a director. These two parts work together to direct your signal in one direction and to snag incoming signals coming from that direction.

Upon receiving the box I was a bit concerned I had been sent the wrong antenna. I didn’t see how it was possible that this V antenna was jammed inside this small box, but as I pulled out all the parts and pieces I found I had everything I needed. The parts all came packaged nicely and the smaller parts were packed in plastic bags. The all-important instructions were also included. 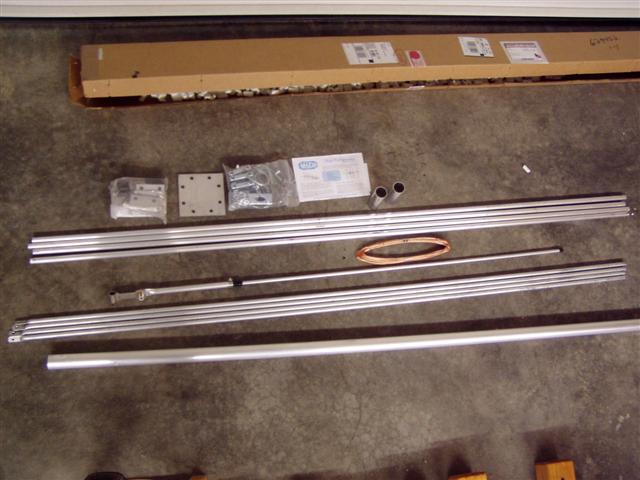 One of the first steps in assembly is to connect together the pieces of aluminum tubing to create the radials that will become the elements for the antenna. This is accomplished by sliding the smaller tubing into the larger tubing, sliding on a small oval shaped piece with a screw and a nut, and then tightening them down. The screw pushes down and tightens the larger tubing around the smaller tubing so they are solidly connected. 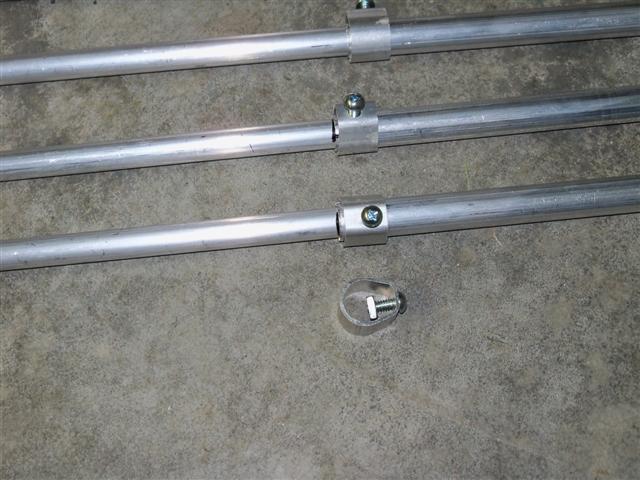 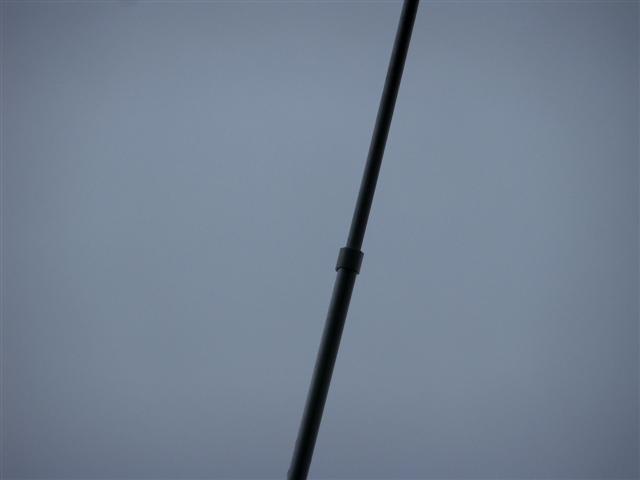 The tubing pieces then attach to the boom using a special clamp system and U bolts. You have to attach them at 90 degree angles so that they make the “V” of the antenna. 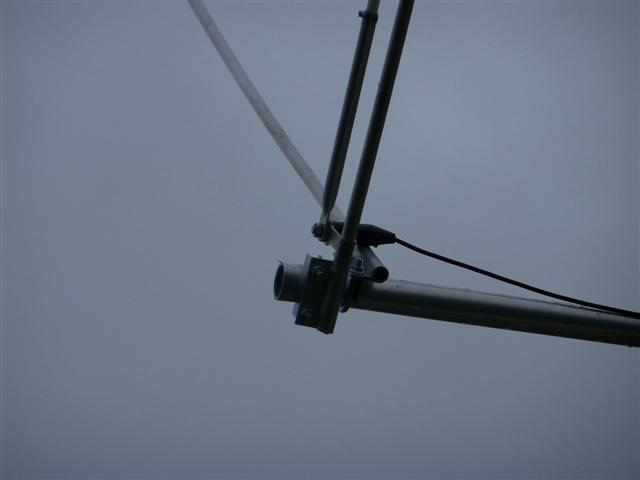 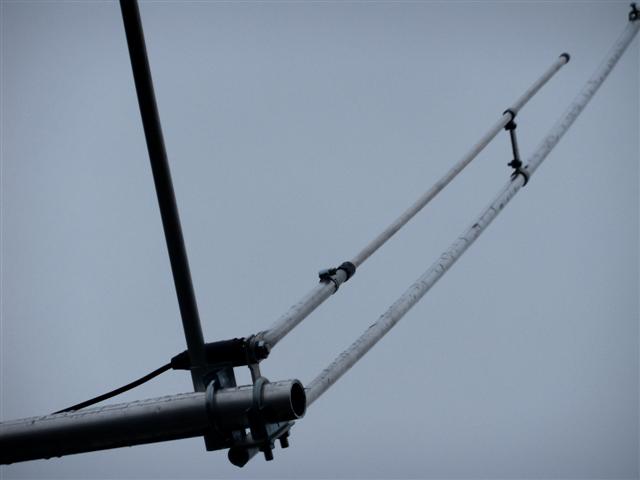 The last step in completing each element is to add the braided copper wire that connects each tip of the V and completes the “loop” of your antenna system. On the driven element you just use the straight piece of wire, but on the director element you’ll need to shorten the wire for it to work properly. This is accomplished by a small coil you make using a piece of provided PVC and two rubber caps that go over your finished coil. 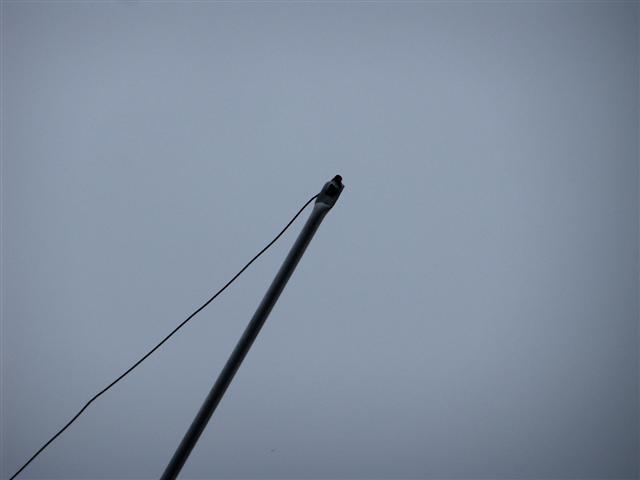 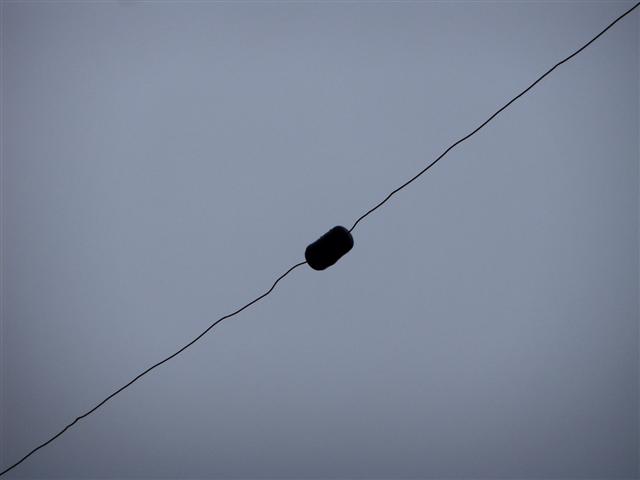 The completed antenna then needs to be attached to your mast. This is accomplished by a special mounting plate that comes with U bolts. The boom mounts directly to your mast. Since this antenna is a “directional” antenna many people choose to make them adjustable by using a rotor so they can point the antenna in the direction they wish to talk. This antenna is very light (8 lbs) so most TV antenna rotors can work in conjunction with the V-Quad. 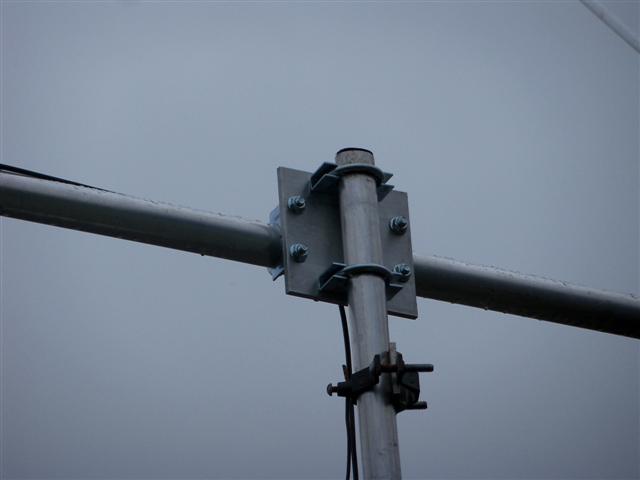 Once the antenna is mounted it may seem big but it is actually one of the smallest 11 meter beam antennas on the market and it takes up considerably less space than a comparable 3 element Yagi antenna. 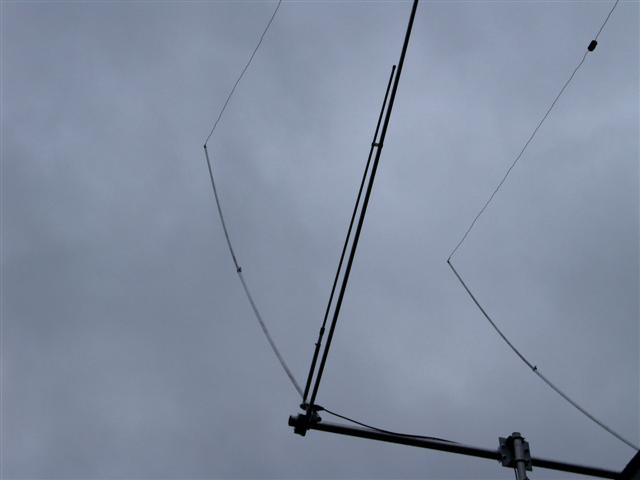 Now don’t get me wrong – this isn’t a small antenna, and when you talk about 11 meter beam antennas small becomes a relative term, but this antenna is definitely “smaller” than most other beam antennas on the market.

Unlike many antennas the V-Quad doesn’t need to be mounted high up to get good results. While height in most cases will improve performance, I found this antenna performed very well from anywhere around 12 feet off the ground up to 25 feet. It can easily be mounted on a roof (as I did in this case for the testing of the antenna). It takes up very little space physically – the boom is only 6′ long and the elements are only around 13′ long and in the V formation they aren’t sticking straight up in the air. 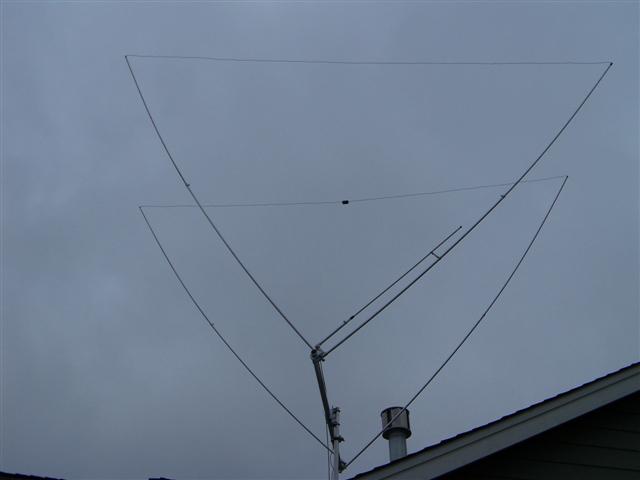 Going from a vertical antenna to a beam antenna for the first time can really be eye-opening. For those of you who haven’t tried a beam antenna you will be amazed at the difference in performance and abilities a beam antenna provides over a simple vertical.

Beam antennas such as the V-Quad will make signals that previously were barely moving your needle suddenly jump up in signal strength. When local talking to other stations who are on vertically polarized antennas you may not see a huge gain in performance, but if you like talking DX or if there are stations in your area who run beams, that is where the V-Quad really comes alive.

I have a local in a town 35 miles away who I talked to regularly with a vertical antenna and I usually would register a 3 on his S meter and he the same on mine.. When I pointed my V-Quad at his 5 element Yagi beam suddenly his incoming signal jumped up to 5-7 and mine did the same on his meter. When two beam antennas get pointed at each other you’ll see a big jump in signal strength. Additionally a beam antenna has “rejection” which helps prevent unwanted signals coming in from the back or sides of the antenna from being picked up.

I tested out this antenna and found that for DX it easily did the job and all that was required to make multiple contacts was a standard 12 watt SSB CB Radio. The antenna had fairly good front to back rejection but it still wasn’t as good a three element Yagi such as the M103. The side rejection also wasn’t as good as I’ve seen with Yagi style antennas which wasn’t surprising.

SWR tuning was very easy with the gamma match and within about 2-3 minutes I was able to get a 1.1 reading with the antenna mounted on a 8 foot mast. Once mounted on the roof the SWR dropped to basically flat and even with running an amplifier (300 watts) the antenna handled it all in stride.

Another oddity about this type of antenna is that it can be installed in a “L” shape configuration. In this type of setup it’s supposed to be directional from front to back and skyward at an angle out of the V. While I did find that this install allowed the antenna to hear in a larger directional area it did seem to lose a bit of signal strength in the front to back direction, dropping 2 S units at my receiving test station. It did however allow the antenna to perform better for local talking to stations nearby with vertical antennas. The L shape may be a better install for someone who wants to talk locally and DX but truthfully if you’re buying this antenna you’re better off installing in the V formation with a rotor for the most impressive results. 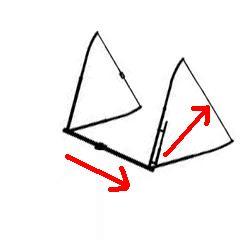 One of the biggest concerns I found people had online was regarding the wind handling ability of these antennas. Because they use a mix of tubing and wire for the elements many people wondered how the antenna would do in high winds. Shortly after install we experienced a 55 MPH storm which gave the antenna a good working over. It survived without any damage but it did move around quite a bit. The rating from Maco for this antenna is 90 MPH and while I think it’s a well made antenna I would have my own doubts that it would survive storm gusts of that strength. Personally I might guess the antenna could handle itself up to around 75 MPH which hopefully most people aren’t experiencing. For those of you who live in some desert or mountain area with super crazy strong winds multiple times in the year this may not be the best choice, but for the other 90% of the population I think the antenna could give many years of trouble free performance.

The V-Quad antenna retails for around $150 and in my testing gave improvements in gain over a vertical from anywhere from 2 to 4 S units. To achieve those results with an increase in power from an amplifier would require an expensive unit that would have to produce many hundreds of watts. As the old timers in the hobby will tell you, the best way to improve your outgoing signal strength is to improve your antenna.

Aside from some in-depth construction time and the possibility of damage from 80 MPH winds I think many people looking to try something different will appreciate both the small turning radius and performance of this antenna.

BELOW ARE THE SPECIFICATIONS FROM AN ADVERTISEMENT ONLINE

* Made With Aircraft Alloy Aluminum.