Mounting a CB in the vehicle

So you went out and bought that brand new radio.

It’s cool looking, it’s shiny, and you just can’t wait to get it installed in the vehicle and start talking.

But before you can do that you have to find a place in the car to mount the radio. Shouldn’t be too tough you figure. So you walk out to your car and you stare at the dashboard, you stare at the center console, you look in the glove box and you even look underneath the seats.

You say to yourself “Where the heck should I mount this thing?”. Well you aren’t the only one.

When you own a semi-truck that has a ton of dashboard space or has a built in headliner in which to install your radio maybe it isn’t such a big deal. But when you want to install a large CB radio in a compact pickup or a small sedan it does take a bit of planning.

(We won’t discuss installation of power wires or coax cable in this article, but take those into careful consideration when picking out where your mount your radio.)

I’ve found that there are a number of useful hints to remember when mounting a radio in a vehicle.

Long word but simple meaning. Can you reach the radio? A CB radio has knobs, switches and lots of other fun controls located on the front. You need to be able to reach these controls easily and without taking your eyes off of the road. If you don’t mount your radio with a easy reach distance you will regret it.

Once upon a time I knew a guy who mounted a radio underneath his drivers seat. His thinking was that it was out of the way and no one would see it to steal it. He was right on both accounts, but he seemed to forget that a big part of using a CB is knowing what channel you are on, and unless you only ever plan to run one channel you need to be able to see your channel display. In fact, you want to be able to see all of your radio’s functions. The best installs for visibility allow the driver to glance quickly at the radio and be able to read and mentally record all of the current settings of the radio. Take into consideration sunlight glare, shadows, and even other objects such as a stick shift or steering wheel that may inhibit your view of the radio.

I used to love to mount my CB radios underneath the glove box in the passenger side footwell area. It was a bit of a reach for me but it had great visibility and was seemingly “out of the way”. At least is seemed that way until I got a girlfriend. After she banged her shins a couple of times on my prized radio I realized something had to change quickly (to protect both the radio and my relationship). Often we may find the perfect place to mount a radio only to later find that it gets in the way every chance it gets. Some other examples of failed installs I’ve heard about –

* A friend mounted his radio at the bottom of his dash in between his stick shift and the lower dash area. It was a beautiful install and had great accessibility and visibility. He thought it was perfect until he got ready to drive somewhere and found that when he pushed upward to third gear he couldn’t push forward enough to get it in to gear completely due to the radio. He changed his install really quick.

* I mounted a radio in my old truck above the rear view mirror. Great place, easy to reach and seemed out of the way – until the day I took a fast corner and the mike slipped out of the mike clip and clocked me in the face.

* In high school a friend mounted his radio underneath his steering wheel only to find that he banged his knees on the corners of it every time he got in and out of his truck.

#4) Is your mounting location good for the radio’s health?

Seems like a silly precaution, but many radios die an early death due to dust, dirt, grime and moisture. If you mount your radio too close to the floor or in a foot well area it’s likely to get dirty and bumped and kicked by feet or legs. If you mount a radio too close to a door it may get rained or snowed on as you get in and out of the vehicle. Many people mount in the center console area, but that also is where most people put their fast food and drinks; leaving open the possibility that your super size cola could be the potential killer of your fancy export radio.

If you are putting a radio in a work truck it’s often better to mount it higher in the cab to protect to get it farther away from the dirt and grime. If you live in a wet environment try to mount the radio someplace where it won’t come in contact with as much moisture. And if you live in a hot dry climate make sure to mount your radio in a location that will keep it out of the sun and cool.

Yes – many of you would put this as the # 1 on the list, but to me function always comes before form.

While having a good useful mounting location is important I do recognize that we all love our vehicles and often treat them better than we treat ourselves. It’s hard to drill mounting holes in that brand new car and we always want everything to look as smooth and seamless as possible.

Things to consider when trying for a nice finished look are –

Now that we’ve discussed some things to think about when picking a mounting position, lets take a look at some pictures of different mounting locations inside the vehicle.

Although not a great location due to high theft visibility and dashboard heat, some people choose to mount on top of the dash for high visibility and accessibility. 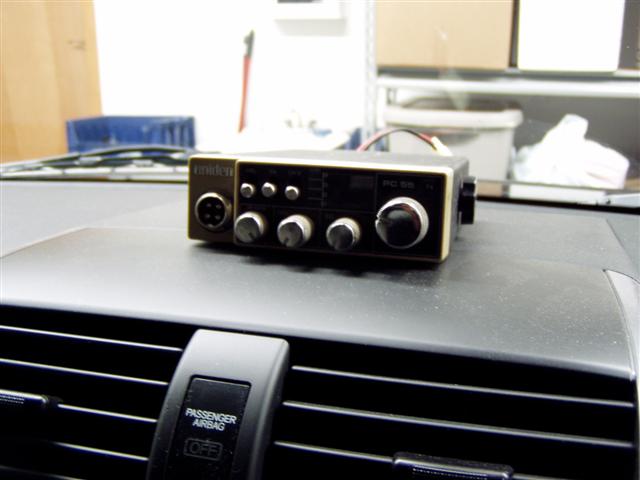 Many vehicles have small compartments built into the dash in different locations. It’s easy to use these to your advantage to mount your radio in a flush and protected location. 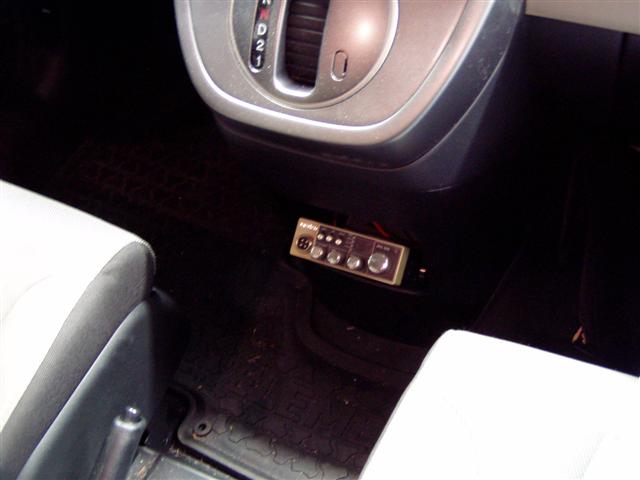 Some drivers like to have their radio mounted above the rear view mirror (semi truck style), but this requires drilling and a solid mount to prevent the radio from falling on your head later.

I’ve seen radios mounted on the drivers side just under the dash, and although they can be easy to reach in this location I don’t recommend it as it can interfere with your driving and is bound to take a battering from your knees. 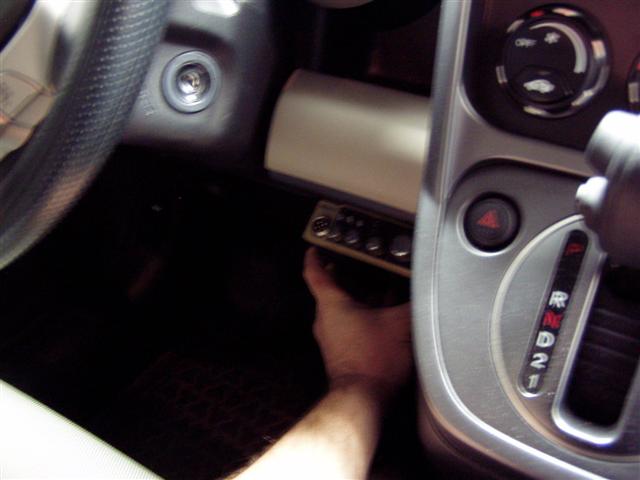 Mounting on the glove box itself can work, a lot of people will use super strong velcro for mounting which often can work very well with smaller radios and also allows the easy removal of the radio without drilling any holes. 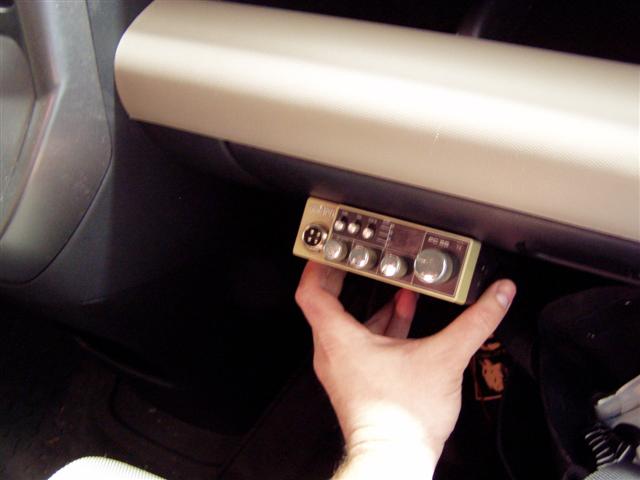 Side mounting to the dash center console is one of my favorites. It gets the radio flush against the surface and keeps it out of the way of your passengers, although you may not be able to hear the speaker as well if it’s up against the dash. 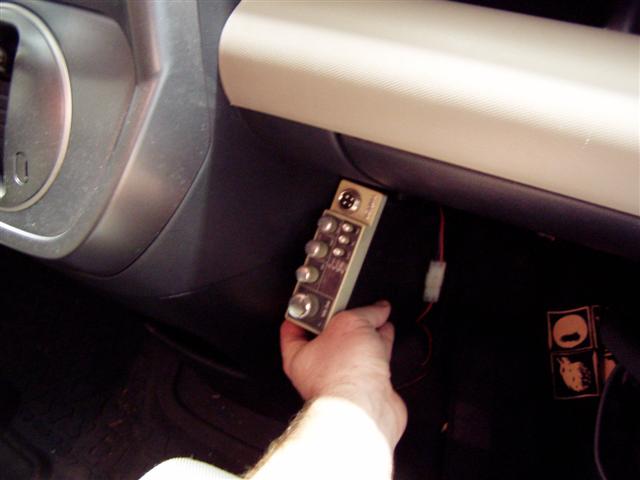 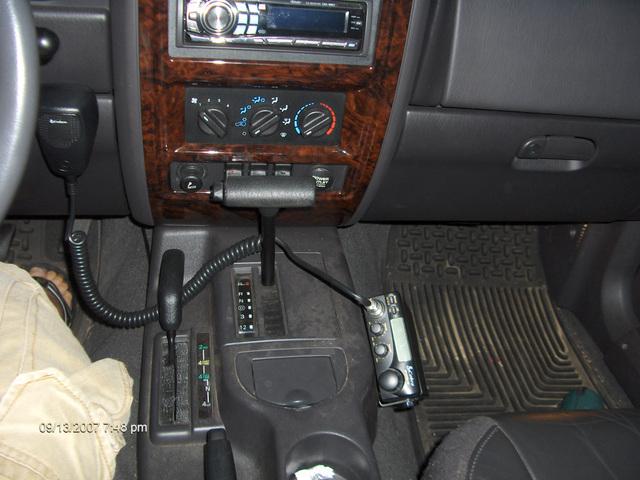 This is a good example of a underneath dash mount – in this case they’ve drilled holes but if you’d like to try this type of mount look for existing screws or bolts holding the dash on which you can utilize to avoid having to drill new holes. 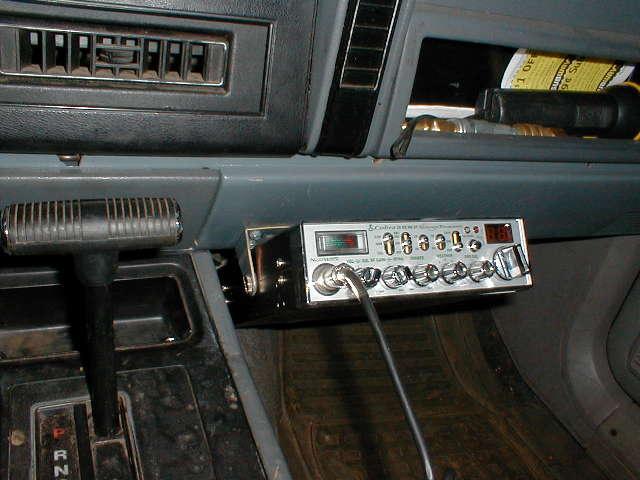 This one is another of my favorites – if you have a good size center console, try mounting at the rear of the console. It requires a turn of the head for visibility but it definitely is out of the way of the drivers. Also this one is good to prevent theft, just throw an old coat or towel over the radio when not in use and no one will know it’s there. 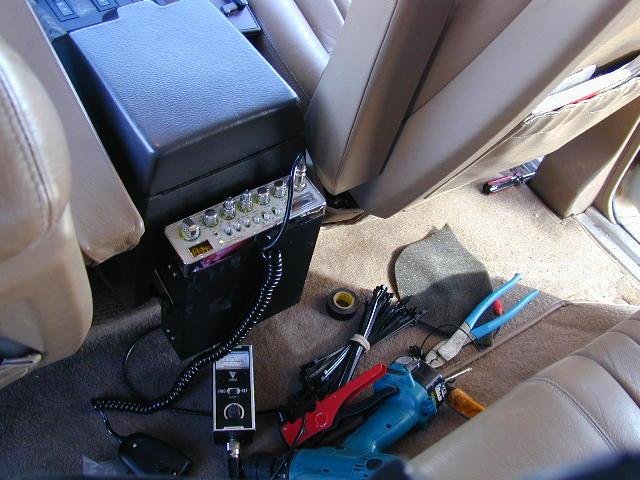 Here’s a great example of a nice in-dash mount. The radio is pretty much flush with the dash and the driver has added extra switches and LED’s. Note that the driver has installed a special microphone jack to the left of the radio…..very trick. 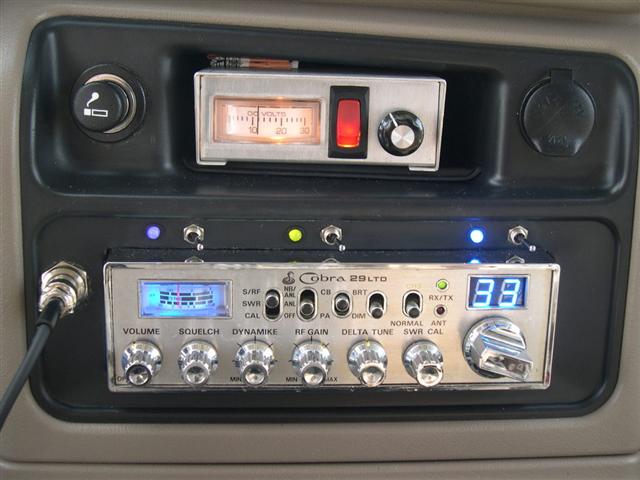 Here’s another great use of space in a small compact car. He’s installed a nice big radio along with a frequency counter and got it all to fit the the middle of the dash console for a nice finished look. 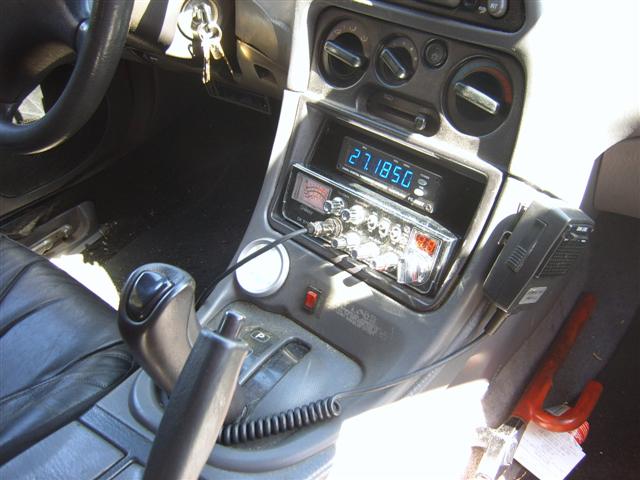 Another way to mount a radio is on a pedestal mount – you can design your own or buy a pre-fabricated one. 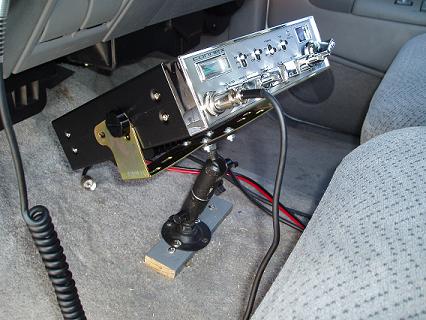 Small radios are the easiest to install and can fit in the many nooks and crannies of your dash. 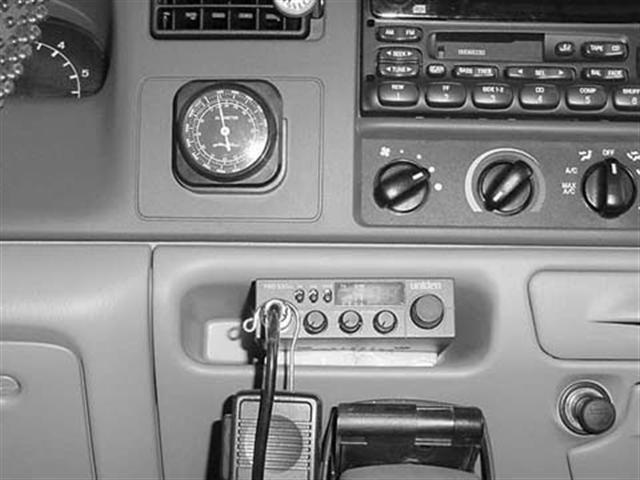 Another of the side console mountings, notice the SWR meter in the coin tray.

Now there will come a time when you buy a big radio and begin to add the extra amplifiers, bird meters, and other fancy equipment. When you get to that point you’ll often try to come up with creative mounts and boxes and such….luckily other people have already put a lot of thought into those scenarios so you don’t have to…

…..below are some very trick and custom mounting consoles designed and built by  Wingnut in NC 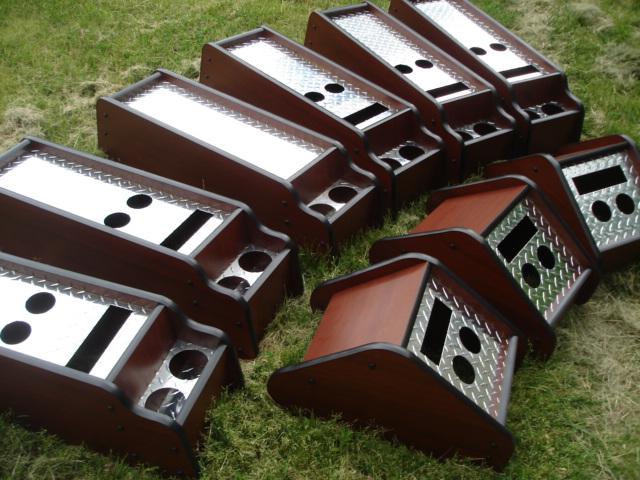