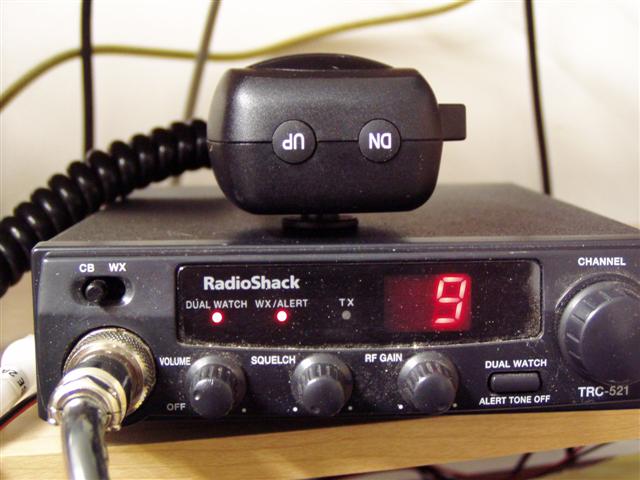 If you’re involved in the hobby than no doubt at some point you’ve owned a cheap radio shack CB radio. I myself have owned quite a few of them and usually I’ve picked them up at a garage sale or on a trade. I definitely do not buy them brand new because as far as CB equipment goes, the compact CB radios at radio shack are some of the most overpriced junk you will see on the market.

I picked up this radio at a garage sale and as with most of the other compact radio shack CB radios it’s small and simple with only a couple of knobs or features.

This radio comes with a stock microphone that has channel changing buttons on it which is always a nice feature when on the road. The buttons seems to work well although the microphone seems a little small in my hands.

All of the controls work well and have a fairly solid feel to them. The weather channels are manually selectable so you can pick the broadcast you want unlike some other weather radios that select the strongest signal only.

The dual watch feature lets you go to a specific channel and monitor channel 9 at the same time. This feature is pretty useless these days and I’m surprised radios are still even made with these channel 9 features since channel 9 is effectively dead and not monitored in most areas of the country.

Realistic CB’s are not known for doing much in the way of output wattage so I’m not surprised the numbers are fairly lackluster.

I opened the radio up to have a look inside for any modulation pots or other adjustment to toy with, but the inside of the radio is a ghost town. The board doesn’t have very much going on and there are no adjustment points whatsoever so don’t even bother popping the case open. I messed around with the coils and limiter and really there isn’t much you can do to get a noticeable increase in wattage or audio out of this radio. Only way to get more audio and more swing would be to add a power microphone BUT this radio uses a 6 pin setup so make sure you’re competent at re-wiring microphones.

The receive on the radio seemed fine and during testing was picking up DX signals without difficulty. I did notice quite a bit of electrical interference and I’m guessing for most people when mobile you’ll have some good static coming out of this radio. There is no ANL or NB features to dull the noise.

There is an external speaker jack at the rear of the radio. The power cord is hardwired in to the radio as is common on most compact CB radios. 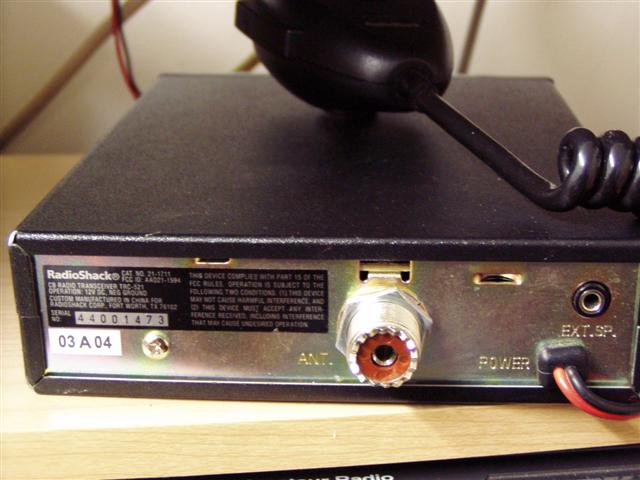 Although I find most compact realistic radios to be junk, a couple of things about this one give it a slightly higher rating than it’s cousins.

# 2) The weather channels are nice to have on such a compact unit.

# 3) The microphone screws on to the radio unlike most of the other small realistic radios that use the 5 pin din.

Now radio shack has this radio online for sale at a cost of $79.95. A price that is completely out of touch with the CB radio world. But radio shack isn’t selling CB’s to the discerning operator, they sell to the new guy who has never bought a CB before. Hopefully as seasoned veterans we can help prevent this highway robbery by keeping newbies informed about other better performing radios that cost less.

I picked up this particular radio at a garage sale for $10 because I wanted to review it, and in my opinion it’s really only worth $10-20, especially when I’ve picked up used Cobra 29 LTD’s for less than $30.

As a small backup radio it’s not bad, and I always like to keep a spare radio with cigarette adapter and small mag mount antenna available for friends to use on road trips. If you’re looking for something for more serious CB’ing look elsewhere, but this radio is probably fine for most beginners or people who need a compact weather radio in their vehicle.