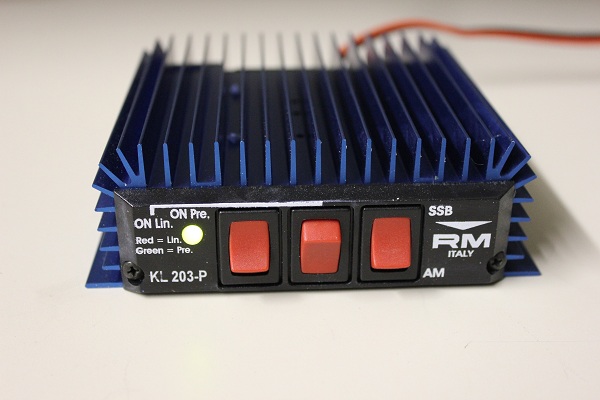 The KL203 has been one of those amplifiers I recommend to people again and again over the years. They are inexpensive, they put out a solid 100 watts, which is more than enough for most DX, and as long as you don’t overdrive them they can last for quite a while.

Recently I saw that HY Electronics (the U.S. distributor for the RM Italy amplifiers) was having a special on the newer version KL203P and I couldn’t pass up the deal. They were selling the amplifiers for around $60 and even with the shipping cost you were getting a 100+ watt amplifier for under $70.

While the amplifier is very similar to the original KL203 you’ll notice that it now is equipped with a pre-amplifier. Previously the pre-amp was included only on some of the more expensive amplifiers starting with the KL200-P and up but it’s now been added to the KL203-P.

The amplifier also has a new color for the heatsink – blue. After years of seeing the shiny red RM amplifiers the blue almost seems out of place but it’s a nice color and color is really the least of my concerns when operating an amplifier.

For those of you who aren’t familiar with this amplifier, it’s a small amplifier (sub-compact would be the way to describe it) capable of around 100 watts on AM and 140-160 watts on SSB. Claims for actual output will vary from person to person but the numbers above are a fairly safe bet. I’d actually suggest that for best operation keep your output of the amplifier around 100 watts and it should last you a good long time.

Now the last KL203 I had was a good 5 years ago and I sold it to a friend and he has used it daily for the last 5 years and it still is going strong. Hopefully the newer versions will last as long but of course the lifespan of these types of amplifiers is really dictated by how they are driven.

The KL203P is not a high drive amplifier. You hypothetically can run a stock CB’s 4 watts into this amp BUT you probably wouldn’t sound great on the air and you’d be pushing the amplifier fairly hard, to the point where it may not live a long life. These amplifiers work best with an input of 2 watts or less.

If you are setting up one of these for the first time I’d recommend a carrier of around 20 watts out of the amplifier. Usually a 1 watt carrier input to the amp will give you 20-30 watt carrier out of the amp. If your radio swings to 15 watts with modulation the amplifier should show output of around 100+ watts. If overdriven with 4-5 watts these amplifiers will give your audio a scratchy or muffled sound, but with low input and a little swing they can sound very nice and clean.

The Pre-Amp actually works quite well but like all pre-amps it will also amplify background noise so you may hear the station in the distance louder but you’ll also hear the static louder.

The SSB delay is a switch you’ll use when running in SSB mode (upper or lower sideband). The switch engages a delay because unlike AM transmissions in SSB you don’t transmit a carrier and so when you have lulls in your speech an amplifier without a delay would unkey. The addition of the SSB delay means that in-between words your amplifier relay won’t disengage or “chatter”. I actually found the delay to be a little shorter than I usually like and in some cases with longer pauses I did notice it un-keying and re-keying, but for the most part it works well. 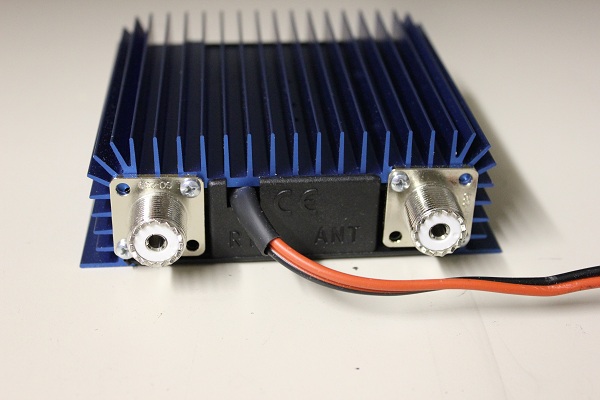 Can I use this radio with my dual final export radio?

The answer is yes. In fact for testing I used this amplifier in conjunction with a RCI-2950DX. The trick, though, is that the radio must be able to key low and you can’t swing a huge amount of power into the amplifier. For instance, a dual final export radio with the variable power turned down and keying 1 watt and swinging to 15-20 watts will probably work perfectly with this amplifier, but if you have an export radio keying 1 watt and swinging 40 watts you’ll be overdriving this amplifier. The RCI-2950DX I was using was keying 0.5 watts on low power and peaking right around 15-20 watts on AM and 20 watts SSB. Again these amplifiers are not meant for high input carrier or high swinging radios. Please see the manufacturers specs.

CB use VS Ham radio use

The size and price of this amplifier is what led me to review it. You can easily Velcro one of these to a radio or throw them underneath a seat and because they aren’t much bigger than a pack of cigarettes they really are the perfect amp for difficult installs with space limitations. While many CB operators will tell you that you need to run big wattage to “get heard” on the air, the truth is that 100 watts is really the perfect output for shooting DX on SSB and is plenty for most AM applications. Since many of the CB antennas on the market aren’t able to handle larger amounts of power it also means this amplifier really hits the mark in those applications. For many entry level CB operators looking to purchase an amplifier the KL203P is a great choice but they do have to make sure they adjust their radios for the proper input for the amplifier. Some will say these are cheap amplifiers that will only last a couple of years but in today’s throw away society an amplifier that lasts 5 years for $60 isn’t a bad buy and you’d be hard-pressed to find anything else in that price range.

One last note – these amplifiers are illegal to use on 11 meters (CB Radio). While there are probably 1,000’s of these being used for this purpose it still is illegal and if you are caught using an amplifier by the FCC you could face fines or jail time. While the FCC rules are very strict many people do weigh their options and choose to purchase and use these on 11 meters. While the likelihood of being caught and prosecuted by the FCC is fairly low, it’s up to the operators to decide how to operate their station. You might read my article “Legal Mumbo Jumbo” for more information. 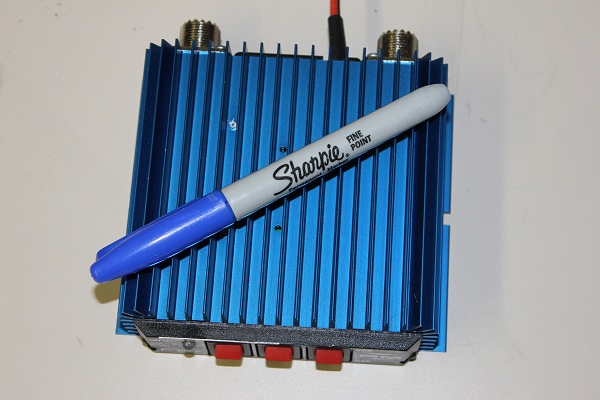