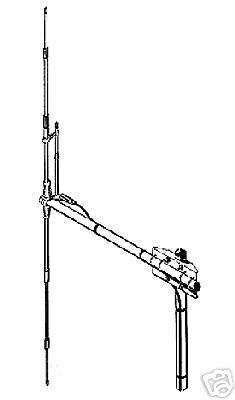 I often check out the deals from H & Y Electronics and after seeing this antenna advertised I got curious enough to purchase one. I’m a big fan of dipole antennas as a simple and effective antenna system and in the past I had very good success with the Radiowavz Bazooka so I was excited to try this Aluminum Alloy antenna from Sirio.

The Sirio D-27 is a dipole antenna that can be mounted either vertically or horizontally. It’s designed specifically to be used as a CB antenna (26-28MHz) and is advertised as having a 3000 watt handling capacity.

The antenna is approximately 18 feet long and weighs 6lbs.

I purchased the antenna from H & Y electronics through one of their eBay auctions. The antenna arrived in about a week in a 5′ cardboard box. Inside was a set of instructions and all of the components to assemble the antenna. As far as I’m aware H & Y is the only company currently importing these (Sirio is an Italian company).

If you look carefully at the picture below you’ll see I’ve labeled the different parts of the antenna that come in the box. 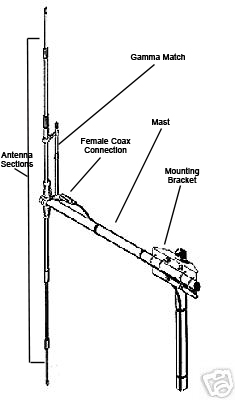 To assemble the antenna you have to slide the mast into the antenna/connector section and then tighten two screws. For the antenna sections there are three of them for each side and each piece slides into a plastic sleeve and is secured with two small Allen screws. The assembly took about 30 mins and the most difficult part of the assembly is the installation and adjustment of the gamma section. I wrapped my plastic joint sleeves sections in electrical tape just to provide a little weather proofing. Normally I’d seal them more professionally but I was in a hurry to get the antenna up and working. In some of the pictures in the article you’ll see the tape ends coming loose slightly.

The picture below show the gamma section of the antenna and to the right where the mast meets the antenna you can see where the coax screws onto the antenna. Sirio includes a small rubber piece that fits over your coax connector and onto the antenna to help seal out water from getting into the coax. The gamma matching system can be adjusted (it telescopes) for the best SWR. I was able to tune the antenna for a 1.2 SWR while the antenna was on the ground before I installed it. 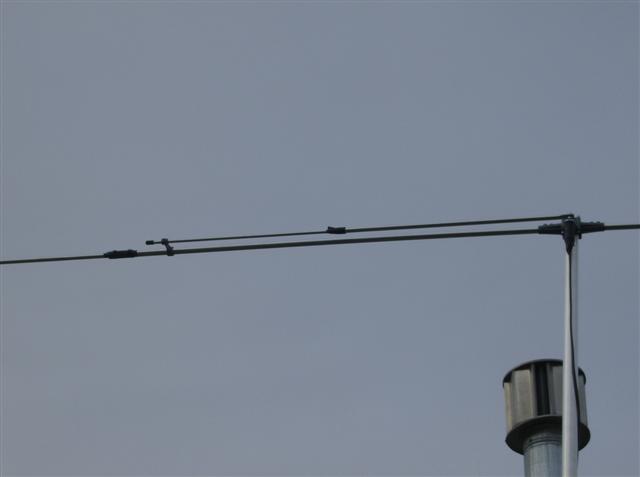 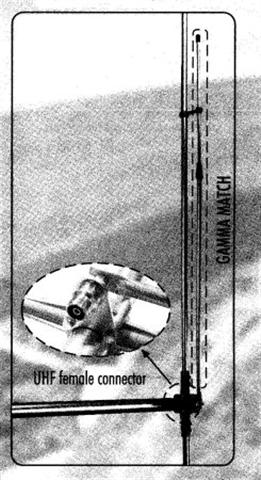 I mounted the antenna with a couple of brackets from radio shack and because this antenna is so light using two brackets was almost overkill, but because we had 65mph gust a month later I’m glad I used two for good measure even though I think 1 bracket would have held.

I also grounded the antenna with bare copper wire that runs down to a ground rod. This will help prevent damage in the case of a lightning strike (it’s required in many states by the insurance companies) and it also helps disperse static buildup that can occur on a metal antenna. In many cases it also can make your antenna quieter on the receive end.

A horizontal oriented dipole is very directional, especially this model. If the ends of the antenna are pointed West-East, then you’ll be able to talk best to the North and South and vice-versa. So if you are doing a permanent mount take into consideration where you aim the antenna.

With this type of antenna you can also install it using a rotor (much like a beam antenna) and can then aim the antenna in whatever direction you wish for best results. For my purposes I aimed the beam in a NW/SE direction and mounted it.

Once I hooked it up to the radio I immediately noticed how quiet the radio was – I was getting much less static on this antenna compared to the vertical antenna I’d had mounted previously. I checked my SWR and it was still at 1.2 the same as when I’d adjusted the antenna on the ground. Now I think it’s easily possible to get a flat SWR with this antenna but lets just say I was a little hasty in my assembly and excitement to try it out so I’ll have to fine tune it once summer rolls around again.

I tried running 300 watts into it and the SWR didn’t fluctuate and the antenna handled the power without difficulty. I didn’t have a larger amp on hand but I’m guessing it could handle more power, although I don’t think I’d run more than 1000 watts into it.

When testing with another station I got very good results. At 35 miles away my friend was receiving me at 4 S units on his beam. Now remember – I have my antenna in a horizontal position and his beam is also horizontal. When another local 35 miles away tried to hear me on a vertical he couldn’t pick me up. Antenna orientation can play a big part in who you talk to and how well they can hear you. So once again, if you only talk locally to other locals on A99’s, Imax 2000’s or Maco 5/8’s you’ll most likely want to install this antenna in a vertical position. Or better yet – buy a good vertical antenna. In my opinion the Sirio D-27 is best purchased for horizontal use, but I do know some people who have beams on top of towers and mounting the D-27 in a vertical position on a lower portion of their tower can work very well.

For DX the antenna has worked great. During my initial install I aimed it a little too much East and for the first couple months of use I was only talking across the top of the country (Montana, Idaho, North Dakota, Illinois, etc). After going outside with my compass I realized my mistake and re-aimed the antenna in a more southern direction and was greeted with Texas, Tennessee, Florida and also the SW (California, Arizona, New Mexico). As everyone knows skip has been pretty rare this year so I haven’t had as many chances to test it out as I’d like, but initially I think it will work great for DX.

One of my concerns with buying this antenna was durability. I wasn’t sure how well the antenna would do as the plastic sleeve connectors seemed a little cheesy to me. The antenna itself is very very light so I wasn’t too worried about wind load on the antenna and my mounting, I was more concerned about the antenna falling apart in high winds or snow, etc.

Turns out I really didn’t have anything to worry about as the antenna has held up very well in the first six month. It immediately got a test this winter and had to endure 3 wind storms of 65 mph gusts, and then a cold spell of below zero temperatures, ice, and 2 feet of snow falling. After that we had 3 days of heavy rainfall. Nothing effected the antenna at all.

Even in very high winds the antenna didn’t really bounce or move around. It’s very thin profile really makes it stealthy for installs and also means it doesn’t have much wind load on it.

I’ve been very impressed with this antenna. It performs well for RX and TX, can be adjusted for a low SWR, is fairly low profile and much less noticeable than a tall vertical or large beam antenna, and it’s inexpensive and easy to assemble. I don’t know how it will last long term, but I don’t see any reason it shouldn’t hold up. If I can get 5 years of good use out of the antenna, the yearly cost will have been about $15 per year.

Since there really aren’t any other similar antennas on the CB market right now I don’t have much to compare it to, but I think Sirio has produced a fine aluminum dipole antenna especially given the low price. 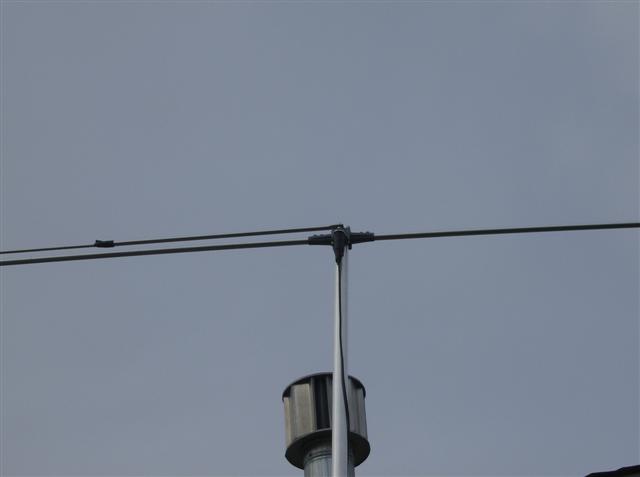