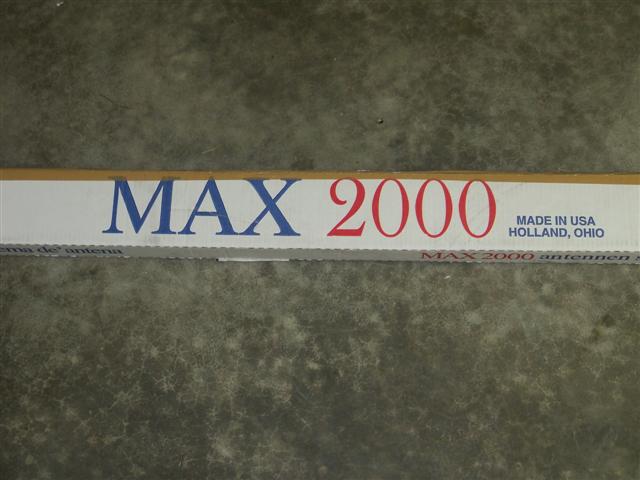 In this review we’ll be discussing the Imax 2000 or as it is now labeled – the Max 2000 base station antenna. The Imax has now been around for quite a few years and while the A99 may be the most sold and used vertical base CB antenna in recent years the Imax 2000 comes in a close second.

As the hobby has changed over the years I think we’ve seen many people ditch their A99 antennas and move to longer or better antennas such as the Imax 2000.

For this review we’ll be discussing the newest version, the Max 2000 from Solarcon and as you can see on the box in the picture above the antenna was made in the USA in Holland, OH. This new model is manufactured by a company called DAS distributors (the Solarcon name brand was sold to DAS around 2005). The president of DAS distributors was well acquainted with the originators of the Solarcon antennas and they are still produced in the same building where the A99 and Imax originally were produced years ago. 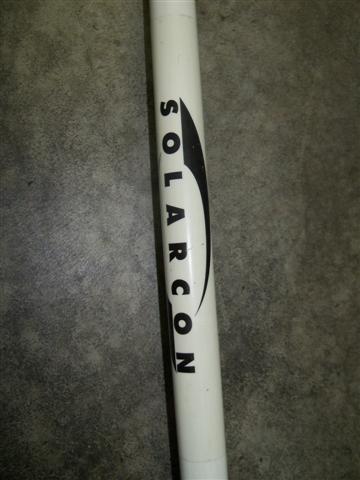 While the A99 is a widely popular antenna it has it’s limitations. It’s advertised as a 1/2 wave over 1/4 wave antenna but it basically is a standard end fed 1/2 wave dipole. There is a great article here by Tech 833 where he took the time to fully disassemble the antenna and analyze the results.

The Max 2000 is a more expensive antenna than the A99 but since it’s longer (24′ compared to 18′), uses larger gauge wire for it’s radiating element (14 gauge compared to 16 gauge), and seems to be built with greater attention to detail you definitely are getting a superior product for your money. The antenna will range in price from around $90-$120 depending on where you shop and I’ve found that Amazon actually has one of the best deals at around $100 shipped (click here).

Now before we jump into the details of the antenna you also can read the many reviews on eham.net for this antenna. Out of 58 reviews it’s received a rating of 4.5/5 which is pretty good given that Hams are usually more critical in their reviews of products.

Our Max 2000 arrived in a square box, the box itself is fairly strong and I doubt anyone would have issues with shipping damage unless a shipping company put something really heavy right on top of the box. Since the antenna does ship in a box taller than me you may run into higher shipping costs with some dealers but for the most part Fedex or UPS should be able to ship these for around $10-20 to most parts of the country.

Once you slide the antenna out of the box you’ll find three sections of the antenna itself and it will be accompanied by mounting hardware and assembly instructions. 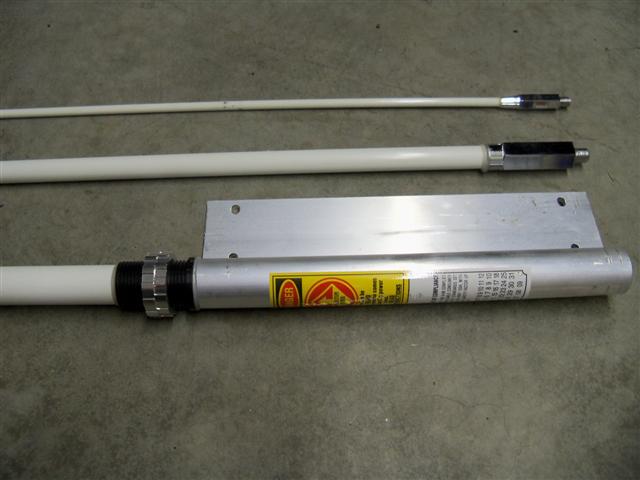 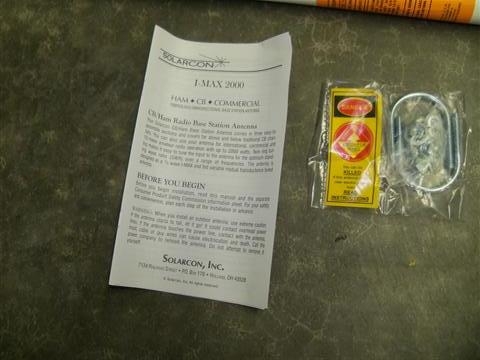 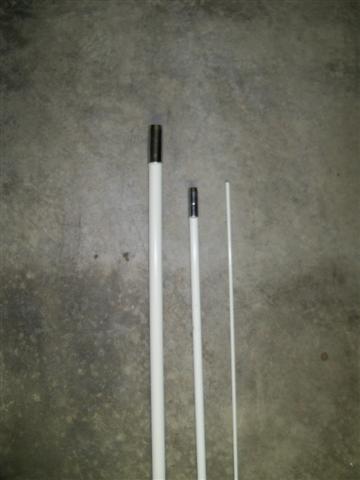 This puts the total length of the antenna just under 24′ and the radiating element of the antenna at around 271.75 inches (give or take half an inch as I didn’t physically remove and measure the element but Tech 833 reported the length at 270.50 inches). Some very best information describing the inner workings of the antenna was made available by Tech 833 in his article (The Imax 2000 Exposed).

People have asked why Solarcon picked this particular length and while I don’t know the particulars we can tell you that in designing an 5/8 antenna there are factors that determine the actual working length including the diameter of the wire and the coil system. The main benefit for a 5/8 wave antenna over a 1/2 wave antenna is the angle of radiation. 5/8 wave antennas have a lower angle of radiation which points more of their signal at the horizon so less signal is loss skyward. This specifically makes these antennas a good choice for DX.

The base and middle sections of the antenna are hollow and the 14 gauge wire is loose inside the sections while in the top section the wire has fiberglass snugly molded around it entirely. 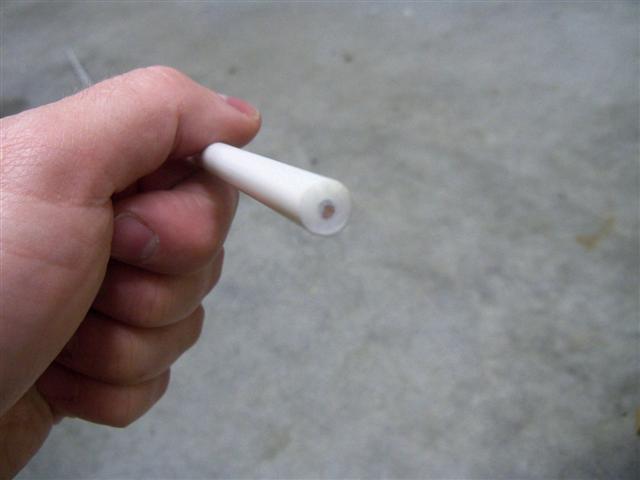 Once you’ve assembled the antenna you’re ready to mount it to your antenna mast. Ideally you’ll be looking for a mast around 1.25 inches in diameter. If you’re looking for a cheap mast system I’ll give you a hint – I’ve found that fence top rail sections sold at Home Depot and similar in 12′ sections work perfectly for making a simple mast. The one end of the top rail narrows so the other end slides in and I usually drill two holes and run two bolts through to make sure the two sections are securely put together. In 10 minutes you can have a nice 24′ mast for mounting. They happen to be the perfect size for mounting with the Imax 2000 system as well.

The mounting plate has two U-bolts that you place around your mast and run the ends through the plate and secure with nuts on the other side. You can mount this antenna to a mast easily in 5 minutes.

Connecting your coax is as simple as just screwing it on to the connector at the bottom and now you’re ready to begin tuning. When mounting the antenna be VERY aware of any low power lines or other structures nearby, more than one operator has lost a life when installing antennas so safety first.

One interesting sticker I found on the antenna was a certificate of compliance regarding the insulation safety factor of up to 14,500 volts. In the sticker it refers to the A99 and not the Max 2000 it was mounted on but possibly they were given the okay to use the sticker on both if they have the same specs for the voltage insulating. 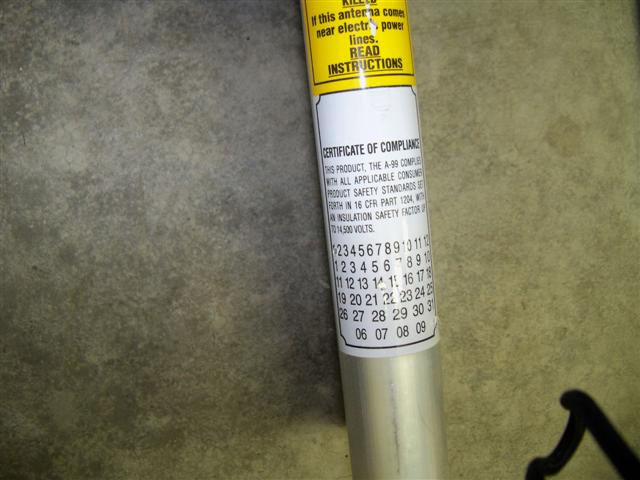 Tuning with this antenna is accomplished by moving the two screw rings that run around the outside of the base of the antenna. Of the many Imax 2000 antennas I’ve owned over the years I’ve only ever had to even mess with the rings on one that I can remember. With the current Max 2000 that I purchased I didn’t need to touch the rings at all and my SWR was a 1.15 on Channel 1 and 1.20 on Channel 40. With those kind of numbers I really didn’t see any need to mess with it all. 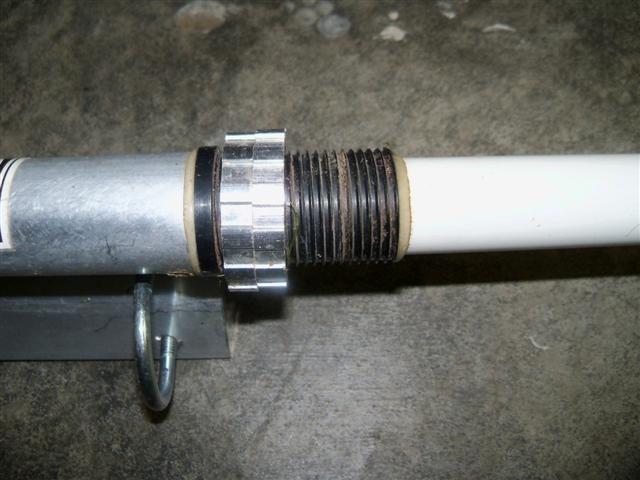 Now compared with a A99 in testing most stations received my signal at 0.5 to 1 S units higher on transmit and on receive I noticed the same results. In some cases I was able to receive stations locally that previously I hadn’t be able to hear with the A99. We also later compared the Imax 2000 with the Maco 5/8 and found they performed very similarly on TX with the Maco 5/8 having a slight edge on receive and the Maco was slightly quieter with background noise.

Some may wonder why the 24′ (22.5 foot wire element) Max 2000 doesn’t necessarily outperform the shorter 21′ Maco 5/8, and while a longer radiating element in some cases may equal better performance, in this case the most likely reason is the matching network in each antenna. The small tightly wound coils in the Max 2000 are more susceptible to loss than the matching system used on the Maco. For more reading on coils you might read these articles (article 1, article 2, article 3).

The top section of the antenna will blow around in the wind like a floppy wet noodle so don’t be surprised in high winds to see it bent over at extreme angles.

While the Imax 2000 is a great antenna in many respects perhaps one of it’s weak points is it’s tendency to create interference. The A99 was famous for creating problems and complaints from neighbors and while the Imax 2000 is much better than the A99 it still is known for TVI issues. Many of these can be solved be installing a choke coil just below the feed point of the antenna.

We ran the current Max 2000 for around a year and in that time I can say it has performed flawlessly with no changes in SWR and no physical issues with the antenna (it survived multiple 60mph storms this winter). The antenna seems to lend itself very well to talking DX and I’ve made many contacts both on 11 meters and 10 meters with the antenna. The antenna is broad banded enough that you can use it on 10 meters and I have heard of some dedicated 10 meter operators chopping off a small amount of the top section to shorten the antenna for 10 meter use to achieve a better SWR. Other Ham operators use tuners and utilize this antenna for multiple bands.

Are there better performing vertical antennas on the market than the Imax 2000? Yes. The Interceptor I-10K consistently gets higher marks for performance than the Imax 2000 and the new Sirio Gain-Master has shown to have improved TX abilities over the Imax 2000. This doesn’t mean the Imax 2000 will lose any popularity contests though as it beats the competition in two key areas, price and simplicity.

The Imax 2000 is cheaper than just about every other 5/8 wave vertical antenna on the market and it’s simple 3 section screw together design makes assembly easy for even the most mechanically challenged operators.

Time has proven the popularity and the staying power of the Imax 2000 design and I’m sure the antenna will continue to sell well for years to come. For the price it’s one hard antenna to beat.