When most people start out in the CB hobby they usually have a stock radio with a stock microphone. It’s only a matter of time before they start hearing some of those big audio stations on the air and ask the following questions –

Now I’ve heard many locals on the air suggest to them to have a trained technician do a tune up on their radio and have the modulation adjusted upwards and some power mods done. Most likely they’ll end up paying $40 or more to have that work done, but finding a local CB tech these days can be hard, and finding one you can trust even harder.

For a true beginner in the hobby I almost always will give them the same answer – first thing to do is add a power microphone.

I offer this opinion to them for a couple of reasons.

# 1) The majority of basic entry level CB radios don’t have a whole lot of modulation, and adding a power mike can instantly make a big difference.

# 3) Many of the cheap CB’s don’t have modulation potentiometers and instead only have limiters which many techs love to remove which often results in paying a tech $40 for a crappy sounding radio.

Adding a basic power microphone to your CB will help increase your modulation and that will ultimately result in an increase of peak output power. It provides an immediate and easy answer to those two questions mentioned above. The best part? You can easily buy one for under $20!

The next tough question for most beginners is – “Which power microphone do I buy?”

My suggestion to many people is the DM-452 Power Echo Microphone. This microphone is simple, inexpensive, and very effective. It’s sold under a number of names with minor variations, but in most cases the microphone uses the same circuit and design. I’ve seen it called the “Superstar DM-452”, “Workman DM-452”, “Aires DM-452”, and even as a no name “Echo Microphone”. 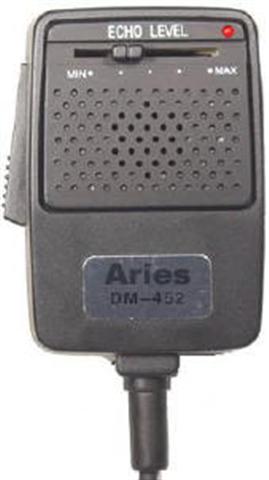 The main goal of a power microphone is to pick up your voice better than your stock microphone using a gain and amplification system and then send that audio into your radio. Now CBer’s can get pretty fancy when it comes to microphones and pretty picky as well, and the DM-452 is by no means a top of the line microphone. In fact it’s a bargin basement microphone, but it fits the bill for most beginners and can work well enough that many experienced operators use them daily.

The microphone uses a 9 volt battery for it’s power source. When you key the microphone the amplification circuit comes on and goes to work. This microphone will give a big boost to even the softest of voices and the amount of gain can be adjusted inside the microphone (VR2). 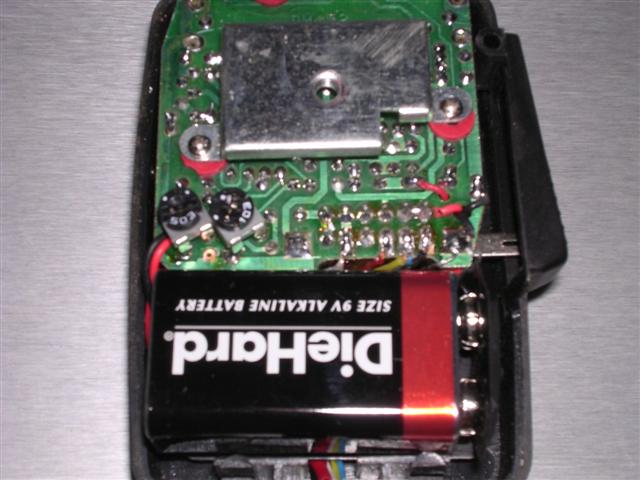 DM-452 microphones tend to give a deep, loud audio quality to your voice and they can make even the crappiest of CB’s sound like a more expensive radio if set just right. Adjusting the audio on the DM-452 can be tricky as the audio can easily be over-amplified if you set the gain too high. You need to set the gain at a level so that boosts your audio and modulation but doesn’t distort your voice or produce over-modulation.

One of the important things to remember with this microphone is when you hold it up to your mouth don’t hold it directly in front of your mouth and speak into it. The best reproduction of your voice and the best quality sound will result from holding it sideways (so that the microphone key is facing away from your face) and speaking across the microphone surface. Power microphones amplify your voice, but they also amplify the sound of your breath or wind going into them. Many microphone have a wind screen over them to help prevent these sounds from distorting your voice but since the DM-452 doesn’t really have that feature, speaking across it provides the best results.

A lot of people choose this microphone because of it’s echo feature. While echo’s on the radio can be annoying and trying they also can be fun and even useful in giving a defining and unmistakable sound to your voice. I know of a lot of operators that run their radios with just a slight touch of echo and it gives them a distinct identifier so that when they key up and talk it’s very easy to identify who is on the air.

A lot of more expensive radios come with the echo feature built in them and that’s why the DM-452 is really a fun bargin. You can easily add it to a Uniden Pro 510XL or other small radio and have the ability to enjoy the echo feature. Realistically you have to understand that the echo quality won’t be the same as a radio that has the feature built in from the factory, but nonetheless it still is fun to have something new to play with on the radio.

The echo has two controls, one which is located inside the microphone next to the gain. This is the delay control (VR1) and controls the frequency of the echo. The outside slide control located on the front of the microphone controls the total amount of echo effect that takes place when you speak.

One of the first things you’ll realize when trying to set the echo level is that you can’t hear yourself so how do you figure out what level to set it at? You can rely on your friend on the other end to help you adjust it, or you can consider doing the talkback modification to your radio so that you can hear yourself when talking and can adjust the echo level accordingly.

For those of you new to echo features remember the following – while an echo effect can be fun, the ultimate goal of CB radio is to talk to other people. Use your echo in a manner that allows other people to understand what you are saying. A echo that repeats over and over or sounds like a crowd of people talking in a cave serves no purpose and ultimately just upsets other operators.

This microphone usually comes with a coiled 9 foot cord. In the ones I’ve owned it seems to have some amount of flexibility but not as much as I’d like. I haven’t run into a lot of cracking or wear on the cord itself which is the most important thing.. While not of the same quality as the cords found on the Roadnoise EC-2018 microphones I can say once again that it’s good enough to do the job. 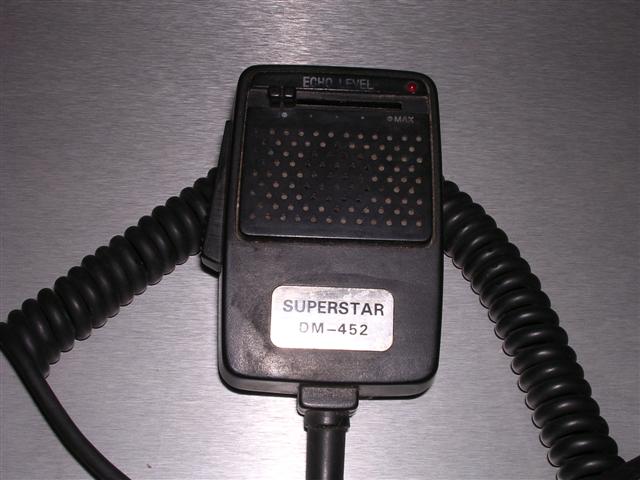 When buying a DM-452 make sure that you purchase one with the correct connector for your radio. Most are sold in the standard 4 pin Cobra layout, but it is possible to purchase them in a 5 pin or 5 pin din (realistic) type setup. On eBay there are often people that will sell you the microphone wired for whatever radio you want.

When you want to access the battery or internal controls on this microphone you just need to loosen the central plastic knob/screw in the middle back. The back piece will then come off. Be careful when doing this as the battery often can fall out and is only held to the microphone with a 9 volt harness that has two small wires, and the microphone cord itself will often move out of position making it difficult to move back into place to close the back lid correctly again. 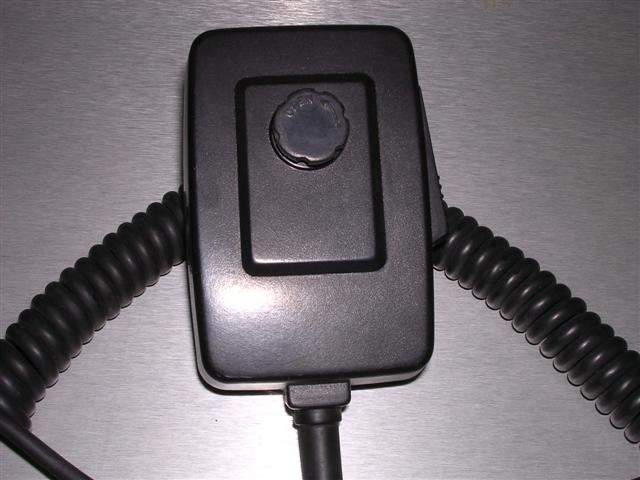 In summary – this is a great little power microphone for under $20. When you throw in the adjustable echo it’s an amazing microphone for the price. No it’s not a high quality mic, but for someone on a budget it can more than serve the purpose. They are cheap and cheaply made but I’ve yet to be disappointed with any of the DM-452 microphones I’ve owned.