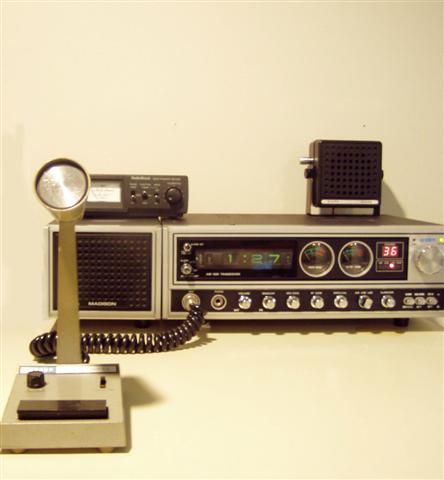 Hard to miss because of it’s square design and use of external speakers the Madison will go down in history as one of the best straight CB base stations ever made, often ranking up there with the Cobra 200GTL. It actually is very similar to the Cobra 2000GTL in design and functionality with but with fewer features and a complete different style.

Now there were multiple versions of this radio that were released over the years. There are some small differences and some easy ways to tell which version you’re viewing.

The first generation of Madison’s carried the President Label and used the 858PLL. They had three LED’s under the channel display. This model also had the four pin microphone jack.

The second generation also carried the President Label, used the same inside components but added a channel 9 button and a fourth LED for the channel 9 indicator under the channel display. It also added a PA feature on the squelch knob.

The third generation Madison was the Uniden Madison (shown picture at the top of article) it utilized the MB8719PLL and had the rotary clock. The Uniden Madison’s had a 5 pin microphone jack.

The fourth and last generation Madison was also made by Uniden but used a digital clock in place of the rotary one. 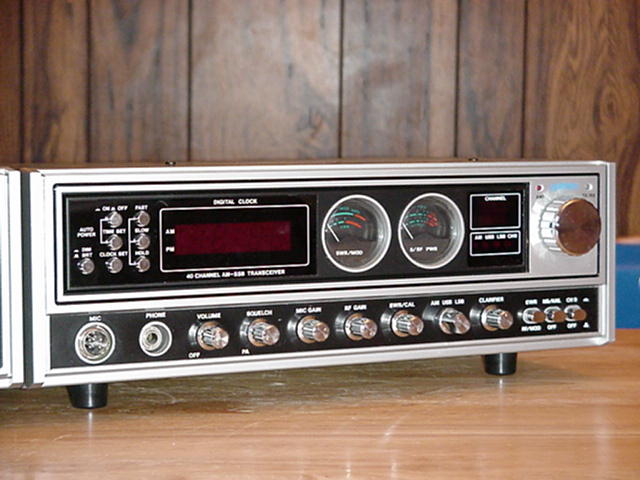 A Uniden Madison is really a beautiful radio but they will take up a lot of your desk space. Madison’s have a square shape and although the face of the radio isn’t very large, the radio case is pretty deep and so they won’t fit on many shelves. The silver knobs and black face have a very classic and smooth finish and they never used the faux wood grain you see on many of the other radios of this period. The round meters are very cool and retro and are recessed into the face.

Features on this radio include –

PA (not on early models)

LED’s for Mode and Channel 9

The Uniden Madison’s with the MB8719PLL are by far the most popular of the series and will be the ones we refer to in our review. These radios (both the rotary clock and digital clock versions) are highly desirable both for their amazing receive and clean SSB modulation, but also for the easily modifiable PLL which can give you upper and lower channels by just adding a couple of switches.

These radios are not high swinging radios, and they don’t need to be. I’ve seen many claims of people who said their radio is swinging 20 watts and even one person who said their radio was doing 40 watts PEP. Don’t worry if your radio isn’t doing those numbers, it wasn’t designed to be a high out radio and pushing a Madison to it’s limits power wise is only going to result in distortion, splatter, and an altogether crappy sounding radio.

The Uniden Madison on average on AM will deadkey 3-4 watts and with a good desk mike should swing anywhere from 10-14 watts. On the Madison I owned I lowered the deadkey to 1 watt on AM and saw 10 watts PEP.

People always are trying to squeeze every last watt out of radio and it’s just not worth it. Once you can accept that a radio wasn’t designed to do 40 watts then you’ll enjoy it much more and won’t spend time over-tuning a radio to the point of ruining it.

The audio on the Madison is excellent on both AM and SSB. Ditch the stock mike though, to get the Madison modulation working and to get the best sound out of the radio add a Turner +3 or Amplifier D104 desk mike. People on the air again and again told me how loud and clean my Madison sounded. The best results I found were with a Turner +3 which brought out some of the deep tones and matched up really well with this radio.

Now I don’t normally advocate removal of limiters as I’m sure you’ve read in other articles, but on the Madison the removal of TR24 (Modulation Limiter) can result in increased audio and swing without a whole lot of distortion.

I’ve noticed on a couple of Uniden Madison radios that when lowering the deadkey to 1-2 watts to run the radio with an amplifier you’d see a big drop off in PEP output on AM. Clipping TR24 will allow the radio to swing higher from a lower deadkey, but you have to make sure you don’t overdrive the radio by running the mic gain on the microphone or on the radio too hot. I tried removing TR24 and found that I could set the radio mic gain at 12 o’clock and the Turner +3 at 9 o’clock for best results. Increasing the mic gain higher than that resulted in over modulation and unwanted distortion.

I got multiple compliments on the quality and clear audio of my radio even after removal of TR24 so it’s something to think about although not always recommended.

Perhaps the most highly touted aspect of these radios are there amazing receive abilities. Much like the Uniden Grants the Madison radios have that quiet receiver that picks up very little static (unless you live in a high static area). Even in areas with some electrical static, pressing the ANL/NB button on these radios will often cut out almost all interference without reducing incoming signals.

The receiver is one of the reasons these radio are great for DX. They seem to pick out stations from the hash much better than many of the newer exports. I currently have a 2950DX on the base and it’s an excellent radio, but the famous 2950 background hiss is present and while it has great receive it just doesn’t give you that quiet and clear receive of the Madison.

I found that these radios can suffer from channel rejection problems, with loud stations on the bowl bleeding through 4-5 channels on occasion. But with a sensitive receiver that’s often the case and I wouldn’t trade the receive abilities for anything.

The squelch works, but I’ve never found the squelch on the Washington’s/Madison’s to work as well as it does on the Cobra’s or newer radios. RF gain controls are smooth and work well.

The channel rotary knob on these radios work very well. They are durable, give a solid feel with each movement and also have the definitive “notch” feel for each channel as you rotate through all 40.

Other knobs on the radio have a very solid feel (something I see lacking in newer export radios) but as these radios age it’s very common to run into “scratchy” sounds when moving the volume or squelch knobs. You may get dead spots or even gunk which gums up the movement. I’d suggest a good contact cleaner to help smoothen things out. I’ve run into these issues on multiple units in the Washington/Uniden line and in the Cobra line as well but to a slightly lesser extent.

One thing to remember about these radios is that they don’t have an internal speaker. You’ll need either an original Madison speaker or another other external type speaker to be able to get sound out of these. I had someone once tell me they thought the Madison they bought was broken, and after a long discussion I realized they hadn’t plugged a speaker into it.

One of the all time greats, often even preferred over the Cobra 2000GTL in some circles, the Madison radio truly has made a place for itself in CB history. If they had come with a frequency counter I think it might have become the definitive CB radio of it’s time.

On eBay you’ll see them sell used for anywhere between $75-200 depending on condition and modifications. I’ve even seen a couple new in box go up for auction.

Things to remember when buying used –

Is it on frequency on SSB for TX and RX?

Any “scratching noise” when moving volume or squelch knobs?

The digital clock models were the last model produced and therefore usually bring in the highest bids on eBay.

I ran my Madison for 2 years before selling it and moving on. I made many many DX contacts with it both barefoot and with a small kicker. The receive is really nothing short of amazing, it’s just so quiet and clear.

It may not have the power of the newer exports and don’t expect big swing numbers, but if you’re looking for a stable and clear sounding SSB rig the Madison won’t disappoint.