The Uniden PC122XL is one of the smallest SSB CB radios ever made, but good things come in small packages and this radio was no exception.

The PC122XL has a very similar chassis to a number of other radios such as the President AR144, Uniden 640e, Uniden 810e, Cobra 146GTL, Realistic TRC-543, and it’s been called one of the most popular CB chassis of all time.

What makes this radio and its cousins so popular? Small size, excellent modulation and output, and rock solid sideband stability.

It’s small, really small. I love installing these in vehicles because the small size gives you multiple mounting options. Adding to the small size is a front mounted microphone making this a favorite for people who are doing in-dash installs.

The microphone connector on this radio is recessed slightly – now I don’t know the actual reason for this but I suspect that since it’s a front mounted microphone on a small radio that by recessing it they made sure that it’s easy to access the adjacent Volume knob without banging your hands into the microphone connector.

This radio was available in two versions – one was a PC122 black face version and later the company released the all silver face version XL version. The radios are very similar with the most noticeable differences being the styling and different knobs.

Most of you will have noticed right away that in making a smaller radio Uniden did not include a Mic Gain control on this radio. If I had to pick one thing I didn’t like about these radios that would be the only issue that comes to mind. Microphone gain control is almost a given on any SSB radio produced these days but on the PC122XL perhaps they just didn’t feel there was enough room to add one more knob.

Realistically though it’s a minor inconvenience that I’m willing to overlook and besides, you can always use a power microphone and just adjust the amount of gain that way.

PC122XL radio design is a lesson in simplicity and function. Four control knobs and 1 channel knob. 3 switches with 3 positions each. The meter is a 5 light LED types and isn’t the most accurate of designs but its small and a standard meter might not have worked with the face design of this radio.

The layout is very functional and the only thing that isn’t super easy to use is the AM/USB/LSB switch control. I much prefer the 3 way knobs used on most radios these days only because they require less dexterity for my big fingers, but the switch design works perfectly and I never experienced any problems on any of the units I owned.

While this radio definitely wins big kudos for its small size and simple design, it’s the performance that really wins the hearts of those who have owned one.

The PC122XL requires very little tuning (similar to the Cobra 146 GTL) to achieve good modulation and output. Adjusting the AMC and ALC for more modulation and SSB swing yield excellent results and adding a power microphone helps add the finishing touch. While there are numerous modifications for this radio to boost modulation, output power, and receive abilities, they aren’t necessary to use and enjoy this radio. I do not suggest removing the modulation limiter on this radio – leave it intact

I have found that older SSB radios like the PC122XL provide a more mellow and smooth sounding voice on SSB than many of the newer radios. My Galaxy 959, RCI-2950DX, and Magnum S-9 all have excellent SSB audio but sometimes I find with those radios that the voice sounds a little too crisp and less real compared to a Cobra 2000 GTL or Uniden PC122XL. Of course that’s a subjective opinion and although I love new technology I do tend to be biased towards my older radios.

The PC122XL will give a nice clean AM signal but it’s not an audio monster. With a strong power mike you’ll sound really good, but if you’re looking for big AM sound stick to a Magnum S9 or Galaxy radio.

PC122XL’s are really for those people who love SSB.

These radios are rock solid – no drift. I had one in my car all winter and when I turned it on everyday (even in temperatures in the single digits) the radio was right on frequency every time. If you’re talking to other stations and they are on frequency you’ll really never have to touch the clarifier. This is one of the wonderful traits of older radios like the Uniden Grant, Cobra 146GTL, and the PC122XL.

Receive on the radio is very good although not quite as good as a Cobra 148 or Uniden Grant. There have been some posts on the internet regarding channel rejection and I’d agree that you might run into that with this radio. If you use your radio in an populated area and there are a lot of close by local stations you may run into issues with bleed over. I found that when on the road often drivers going in the other direction would splatter me pretty bad even though I was many channels away from where they were transmitting.

The NB/ANL function works well to limit the amount of noise in the receive and I had no issues with electrical noise when running the radio in the mobile.

As far as adjustments inside the radio – you can easily adjust the AMC, ALC and AM power (see video below).

Overall these radios are definitely a collectors item and are a great daily talker as well. They are small, stable on sideband, and have excellent SSB audio. Ask anyone who owns one and they will tell you how great they are. 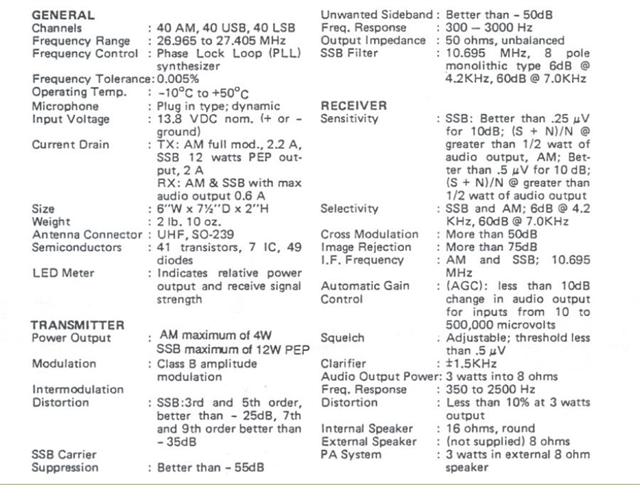